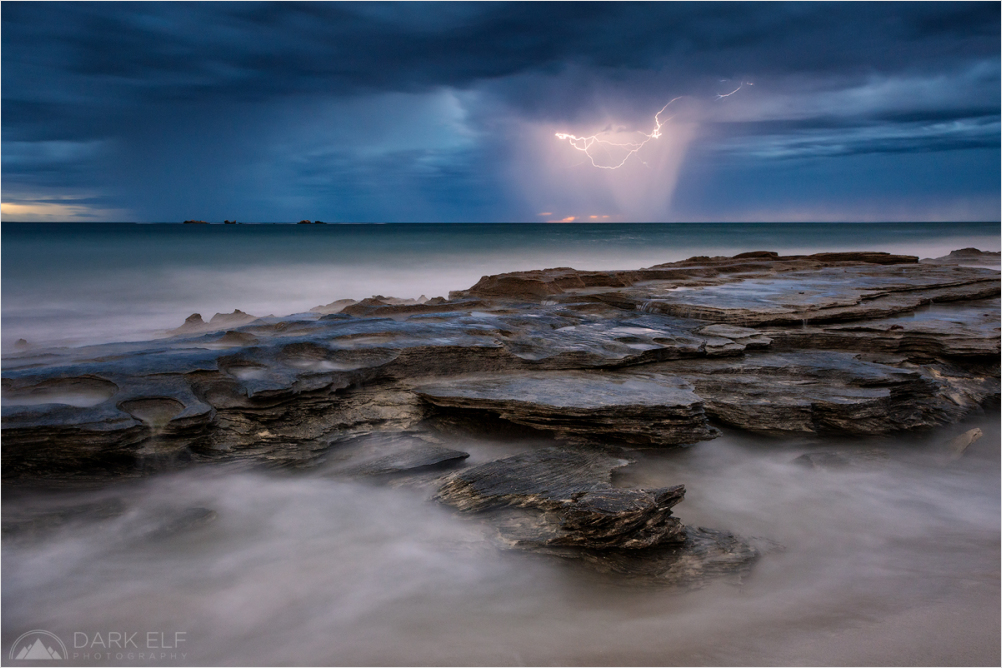 I went out to one of the local beaches last Saturday hoping to photograph a beautiful sunset. Instead I ended up photographing a storm with lightning and thunder that was passing just off the coast of Perth. It was one of my very first attempts to capture lightning. It was certainly a learning experience for me.

The clouds moved in very quickly that evening. About an hour before there was barely a cloud in the sky. Couple of things I have learned about evening/night photography are to find a composition early and set up the camera before shooting. Foreground composition and focus are especially important. It is hard to see anything later on so you are kind of guessing what your composition will be and it is also hard to focus in the darkness.

For this photo, I was able to find a suitable composition and then it was just a matter of waiting for the storm to get a bit closer. I do not have a lightning trigger so I was shooting 30 second to one minute exposures, hoping to catch a bit of lightning in the process. I managed to get a decent lightning strike on two or three of occasions and this is one them.

I liked the way that the lightning illuminated the cloud and rain falling around it. I think the foreground works well enough too with interesting rock formations surrounded by the sea, which was nicely smoothed out by the long exposure. It was actually very dark when I was taking this shot. Hence, I had to bump up the ISO a little bit to compensate for the darkness and also so that I could keep reasonable depth of field at f/8.

This was an unexpected little bonus in terms of photography. Storms and lighting have been on my 'to do' list for a long time and at least I got a small taste of it last weekend. This only makes me more determined to look out for similar opportunities in the future.

I am taking a break for the next three or so weeks. I am travelling to the eastern states to visit some new places and to re-visit some old ones too. See you all again when I get back.

The contrast between the hardness of the flash of lightning and the lifeless sweetness of streams is gorgeous ! Phil

Great capture of this lightning strike!! This is on my bucket list, too. Have safe travels.

Superb result and intriguing explanation, as always! I do admire your photographic endeavours, and wish you lots of great photo opportunities on your journey!
See you again soon ... with many magnificent images, I hope!

Oh, This is Just fantastic, Maciek! You certainly DID catch some great strikes ;-) This is wonderful and I love the sensation that emits from this view! Like a magnificent production! Beautiful work sir!

A spectacular image! It is amazing how the area around the lighting is illuminated. I love that. A gorgeous image with beautiful foreground. Have a great trip!

Lightning was years in my list of photos "not taken yet". Finally, I got a chance to photograph it on last summer in Barcelona, when I even had not a tripod with me - so I used everything I could manage :)
It's all so true about the preparation for that - when the action becomes, you better be ready!
(It's a similar situation with Aurora in darkest winter time here - if you are not prepared a focus and all settings earlier for those seconds, you definitely lose the photo).

Awesome image! You met the challenge well. Have a good trip.

Whoo...a long exposure on the sea with a Lightning on the background...it's everythings I like
5 stars again for this one. You are a spotlight maker ;)