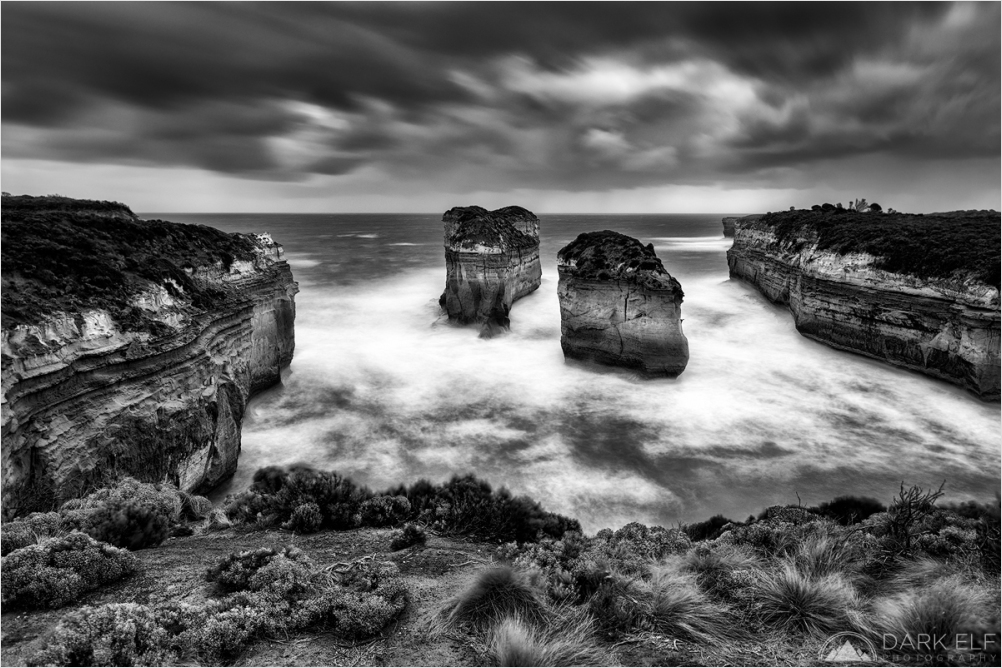 Shadows of The Wind

The last and the only time we explored the Great Ocean Road in Victoria was back in 2011. Therefore it was great to have a chance to re-visit this magnificent area again in May this year. It is one of the world's great drives which takes you along the spectacular southern coast of Australia.

The rock formations in today's photo were actually connected together by a natural arch before 2009. This used to be the Island Archway, however, after the arch collapsed they were renamed to Tom and Eva after two teenage survivors of the Loch Ard shipwreck which ran aground nearby in 1878.

We had some mixed weather when we visited. From strong winds to storms to rain and then to some beautiful sunny conditions. This photo was taken on the first day when a big front was passing over the area. The clouds were dark and moving fast with the seas being very rough and swell higher than usual. Perfect weather for some moody scenes.

I was thinking of shooting very long exposures but the wind was just too strong and I did not think the camera would be steady for long enough with the gusts pushing right against lens and filters. I decided to go for shorter exposures of 30 seconds. This enabled me to catch enough movement in the clouds and also some great textures in the water. Every time a wave crashed into the cove, it made the resulting rough texture of the surface seem like a shadow following the wind across the water.

Shorter exposure time also allowed me to keep the movement of the shrubs and grass in the foreground within margins that I consider reasonable for my photography. Although I want to avoid completely washed out grass and foliage, I do not mind a bit of movement at all, especially with longer exposures. It often adds something extra to the mood and mystery of scenes like this one.

Once again you manage the perfect time exposure and the perfect balance of B&W ! A beautiful and wild place in despite that the arch is collapsed ! I love your framing, the movement and feeling of the wind, the dramatic mood, the softness of the water against the rough rocks ! I can feel all the power of the Nature !

@Anna Cherer: Thank you so much Anna :-) I am glad you like this one!

A MOST DRAMATIC & BREATHTAKING photograph, BRAVOOOOO

Tom and Eva are quite spectacular in this otherworldly image. A magnificent photograph for sure.

Beautiful we feel the strength of nature
Superb, really

This is just beautiful. I love the black and white and the feeling of movement. It would have been interesting to have seen the rock formation when it was an arch.

Wonderful details everywhere. I like that foreground very much, too.