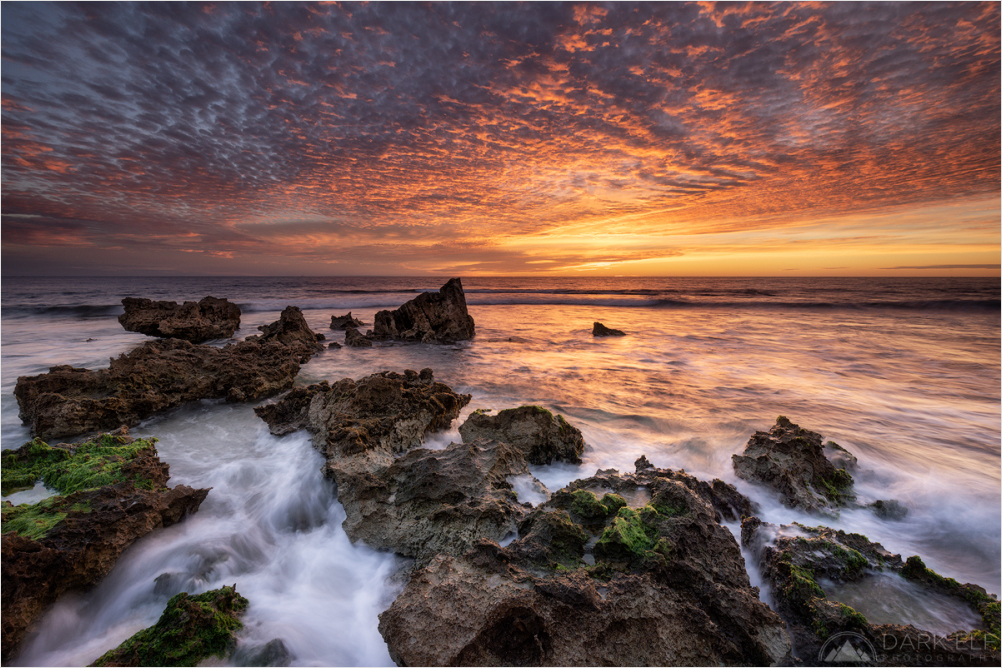 Song of The Sky

Posted by Darkelf Photography (Perth, Australia) on 3 July 2018 in Landscape & Rural and Portfolio.

Hot off the memory card (or the camera sensor if you prefer) comes another sunset from the coast in Perth. I was checking out the clouds for almost entire Saturday last weekend and when I saw a ray of hope for a colourful sunset, I headed out to one of the previously scouted locations set aside specifically for moments like this.

It was still a little touch and go with the clouds moving to the right of the screen but they were moving slowly enough not to obscure the sun once it dipped below the horizon. The cloud formations were beautifully rippled and textured to allow the golden light to illuminate them and create fantastic shapes and detail. I knew that the rocks would provide great foreground elements and the last piece to fall into place was the flow of the water between them. It took some observation and careful timing of the shutter button once the right wave came along.

I have been using more advanced (for me anyway) photographing and processing techniques of late and I used three exposures to produce this final image. 90% of the image comes from my main exposure. I used a brighter exposure to bring back the detail in the rocks closest to the horizon, where my reverse GND filter darkened them too much. I also used a darker exposure to keep the brightest part of the sky under control. That last action was basically just a gentle brushing in of the golden tones over the horizon. I did not want to dull the shine completely but I did not want leave it too overexposed either.

I hope you find the final image as thrilling as I do. This was the kind of an evening that I was waiting to photograph in Perth for a while. It was truly a song of the sky on that day that made this moment special.

Magic, your photos are always extra

Gorgeous light that radiates across this dramatic sky!! Beautiful composition!

A brilliant image of this wonderful sunset. A work of genius.

@Steve Rice: I would not go quite as far as that last bit but thank you very much nonetheless :-)

I don't know how to admire this wonderful photo with words as it is perfect and beautiful from every points of view...

Congratulations on the Color Spotlight! It's well deserved.

This is just stunning! Such a spectacular view and the color is just gorgeous! It was well worth waiting for all day! Congratulations on the Spotlight! Very well deserved!

Back to congratulate you on the well-deserved Spotlight!!

Wonderful. Congratulations on your spotlight :)

Apt title. This inspires me to find more beauty...

@Larry Bliss: Than you Larry