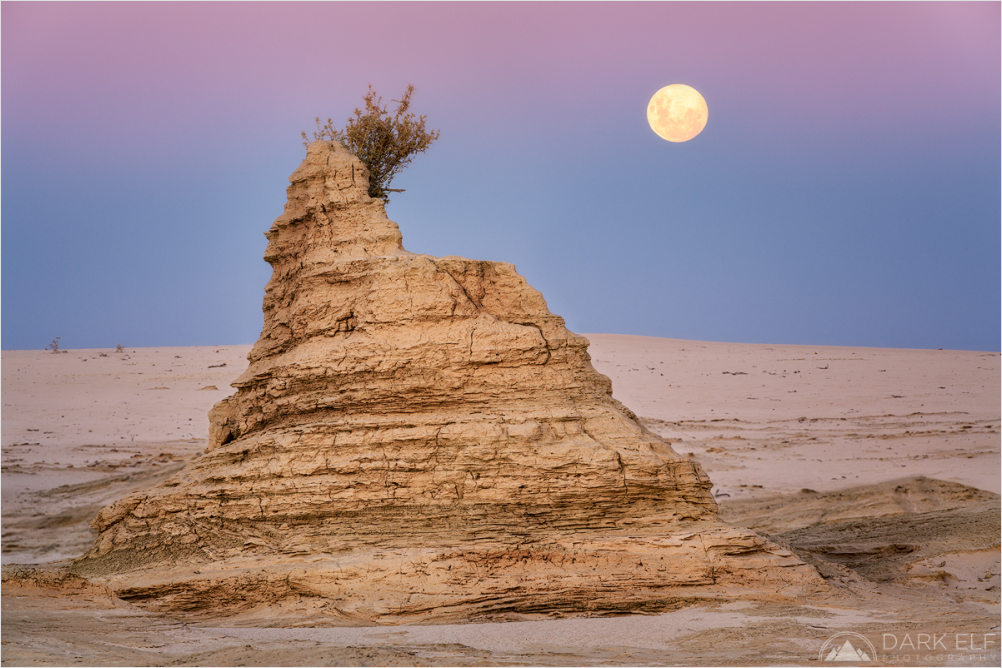 Full moon rises over the sand dunes of Lake Mungo lunette in New South Wales, Australia. A simple photograph for today but one that hopefully speaks of the calmness and silence that surrounded us that evening just about in the middle of nowhere. Not that we would rather have been anywhere else.

Not having a long lens in my equipment armoury can sometimes make shooting the moon a little tricky. It always makes me think how to give it enough prominence and presence in the composition when I know that it will end up being rather small. Seeing a full moon rise over the dry bed of Lake Mungo once again raised that exact question.

I do not know if I went the right way about it but my reasoning was that it would be best to give another subject a prominent role in the scene and for the mood to act as a secondary but complimentary focal point. I scanned the area around me for a suitable rock formation that could be used to that effect and I think this one works quite well as the sharp peak and grass counter balance the moon in a way that makes the scene well weighted for me.

There is something special about colours in the eastern sky during a cloudless sunset and especially so in the desert and also round the coast. The sky usually has lovely pinks and purples to begin with with deeper magenta and blues appearing later in the evening. These tones made for a great background to the rock and allowed the mood to be clearly visible too. There was still a beautiful after sunset glow that cast soft light onto the dunes and with a little dodging and burning I was able to accentuate the detail.

Just in case you are wondering I used two frames in this photo. One focused on the rock and one on the moon, taken one right after the other. In hindsight, I should have take another exposure with focus on the middle ground just behind the rock. Something to keep in mind for next time.

Well composed ! an original rock, a beautiful capture of the moon, and nice colors, make a fabulous atmosphere !

Thanks for the detailed description. I really like the idea of stacking images to get the effect, and agree that one extra shot would have improved the overall image - some extra detail in the middle area would be a bonus. But it's great just as it is.

@dobbino: Thank you :-) One never stops learning. I have not done too much focus stacking previously and only once reviewing images later on computer I thought that an extra frame would have been useful.

an other worldly quality here. excellent

Superb !
Moon Eclipse tonight, but my landscape of observation won't be as beautiful!

@Jean-Luc.M: Merci Jean-Luc. Hope you got some good shots of the eclipse.

A totally gorgeous image. The sandstone formation and moon work together exceptionally well.

A fantastic image and, as always, great lessons for those of us (i.e. yours truly) out here who need all the lessons we can get.. This is wonderful, Sir!

The colors are phenomenal.

Beautiful. I always get frustrated with moon shots because they always seem to disappoint compared with what I see. Next time I may try the two or three shot idea.

@B. Thomas: Thank you Barbara. I know what you mean, I have the same struggles.

A very different and lovely image! My eyes smiled!

A stunning image. The rock formation in the foreground creates a lot of interest and is a great anchor but the star of the show is the moon and the beautiful color. I love this image. It does convey peace and tranquility which I find hard to find sometimes. I have tried and tried but I take terrible moon shots. They never turn out!

@Elaine Hancock: Thank you Elaine. You just have to keep going and they will turn out well sooner or later. I sometimes go back to my first moon photos and wonder what the heck was I doing ;-)

Great job with the all the hues and focus stacking! A peaceful scene, indeed.