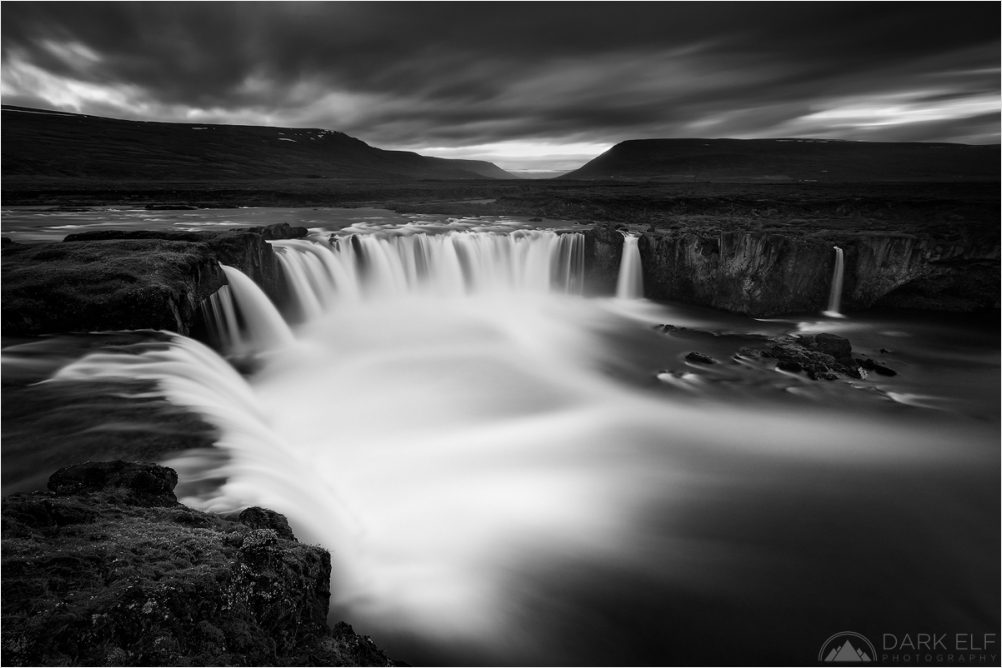 Godafoss waterfall is one of the most iconic and popular locations in Iceland. It is also one of the most easily accessible. I mention most a lot because I think this is also one Icelandic place that I struggled most in terms of photography. I either could not come up with a decent composition or the conditions were tough or I was more worried whether our hire vehicle would get us back home after photographing the falls in the middle of the night, just like during our last trip. The engine and transmission were making some funky whining noises throughout our tour but in the end it got us home.

One planned image I was able to make is the one I am posting today. It goes well with my Icelandic waterfall monochrome long exposure series. It includes Selfoss, Dettifoss, Gullfoss, Hengifoss, Skogafoss and now Godafoss. The cloudy summer night was perfect for what I had in mind. I went around to both sides of the waterfall trying to find a spot where I could get the least amount of water spray drifting into the scene. Since the opposite side was already occupied by a number of photographers, I settled on a rocky outcrop on the southern bank of river. It gave a great perspective overlooking the entire waterfall with its edge leading nicely through the scene.

With strong wind and good flow of water it was always going to take a few attempts to get this photo right. I was mostly worried about the far side disappearing behind thick mist and I wanted the cliffs to remain visible to allow continuity of the edge leading all the way around from where I was standing. Other than that, I think that it would be very hard not to get some sort of mood for photographs in Iceland, even in bad weather. The long exposure just helped the dark mood here on its way by accentuating the motion of water and clouds and helped to create a timeless atmosphere that to me was very fitting for this amazing location.

A wonderful long exposure and B&W well contrasted ! I love it !

Excellent work on this magnificent image.

Somehow it has the feel of a cosmic wormhole to me. As though you could dive in there and be transported through space and time :)

Just incredible, the visual impact of this scene you have blessed us with! My first utterance upon seeing this was that classic American utterance “ Oh My G..!” But you know the rest ;-) ... At any rate, your story as always , provides an adfitional exciting and entertaining element of learning and enrichment here! I just love it!! Certainly glad the “old clunker” car got you back to the start point ... I always get a breath of anticipation when Isee your new posts... Such a fantastic one, this is!! Cheers kind sir!!

@Denny Jump: Cheers Dennis! Always glad that you keep enjoying my work :-) That car must have been the worst rental car ever. It making louder and louder noises as we progressed through Iceland but I just thought "what the hell - if it falls apart so be it" and pushed it hard through some rugged terrains. Not to mention the three tyres that had to be replaced along the way...

A gorgeous mood indeed. A truly magnificent subject and image.

Stunning captures! Just enough contrast in the rocks to keep them relevant to the overall image.

Indeed Timeless Atmosphere!
.
one of nice things about your photos are the visitor feel its not just about photography. Photography by itself is not your destination, it is your very useful tool for all kinds of your discoveries in your amazing trips.

@Elaheh: Thank you :-) I do love discovering new places as well as re-discovering old ones. One of the things I like about long exposures is that when the camera is taking the photo for three, four, five or more minutes I can take the time to admire the surroundings and really feel the mood and light around me.

Moody is the perfect description. It sounds like an amazing place to visit.

a real stunner in black and white