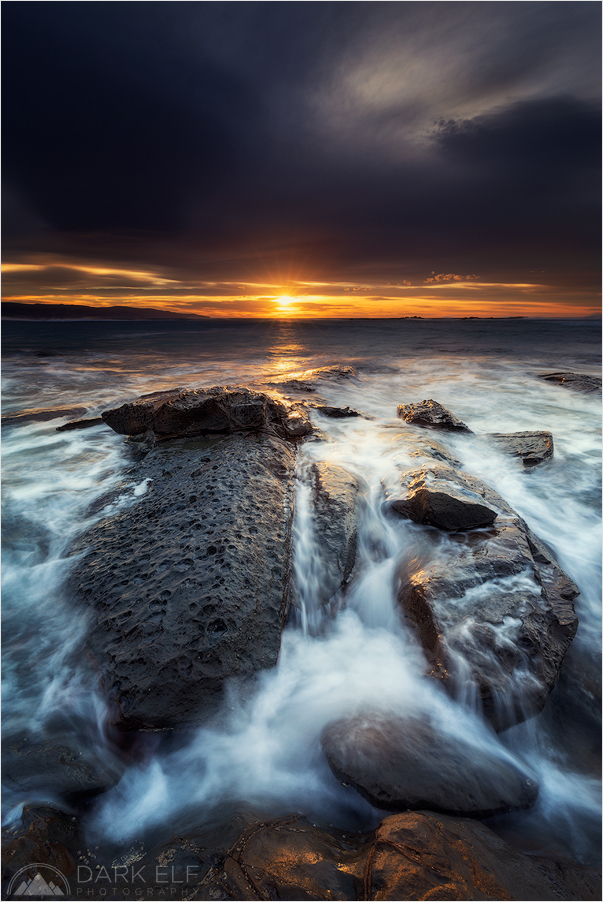 I think that my photography in Australia will always be dominated by the coast. Despite the size of our land we are surrounded by water all the way around and the scenery varies so much from place to place. There are plenty of amazing places inland as well but the coast will always draw me out and it is also much easier to get to when we are home and busy with other work.

This is a second photo from a morning in Apollo Bay on the Great Ocean Road in Victoria back in May. There the road leads along a stretch of the coast where you just cannot go wrong with finding interesting subjects and compositions, If the light cooperates that is ;-)

The weather was changing on this morning with strong winds and thicker clouds arriving to signal first wintry storms moving in for the year. These conditions allowed for some interesting clouds and darker morning atmosphere, even after the sunrise. When the fiery colours of the dawn dissipated, I looked around to find interesting rocks where the water moved around nicely with each wave passing by.

I wanted to see if I could get a moment where the sun would peek between the clouds to shine at least a little bit of light on the rocks. This is the only time when it happened, as the clouds kept low and covered the rest of the sky. I knew that once the sun went behind those clouds it would not appear again for a longer while. I liked the gentle illumination that it was able to cast on the rock fragments and used it together with moving water to lead the eye through the scene.

I intentionally kept the exposure in check to soak in some of the darker atmosphere and resulting drama in the final photograph. In addition, half a second was great for the water motion between the rocks to create a good dynamic effect. I got a subtle sunburst happening, which I though suited this seascape. I did want the sun to be the highlight over the rocks and draw the eye in once the viewers moved their attention up over the water. On this occasion I also got the tide just about right. If it was a little higher, I think the water would cover up most of the rock, especially as the swell was beginning to build up quite high too.

Congratulations again on a fine image. I love the amount of thought and planning that goes into your photographs, and it shows in the end result! I have two questions/comments if you don't mind. 1. I don't think you used one here, but when you do, which ND filter do you use?, And 2. That's a lot of blur from half a second"s exosure - was the sea very rough at the time?

@dobbino: Thank you for your feedback and interest Dobbino! In terms of ND filters, I have 3 stop and 6 stop Nisi filters. I also have a 10 stop Lee Big Stopper that is actually a 12 stop filter (I measured it). Most often I will use the 3 and 6 stop filter depending on light and conditions. For your second question, yes the seas were pretty rough. There was incoming storm and the waves were getting towards four to five metres high at the time. When they crashed between the rocks, it was pretty much a blur with the water rushing through.

Thanks very much for the feedback.

A wonderful foreground ! and I like the contrast between the darkness of the sky and the light below !

Beautiful seascape with a lovely dynamic and colour

Considering the size of the waves crashing on the rocks, you did a great job with this image. 5*

@Shaun: Thanks Shaun! They were braking reasonably away from me. It was just the white wash that was keeping me on my toes :-)

It should be dominated by the coast because you do such amazing work there.

Perfection! The water, rocks, and sun all work together to perfection.

A magnificent image. I love how you captured the sun below the bank of dark clouds. The rocks and the water in the foreground create a beautiful and dramatic image. You are so lucky to live near the water. The water and rocks are always ever changing with so many possibilities for amazing images. 5*

@Elaine Hancock: Thank you so much Elaine! You are right, there are never the same moments when going to the coast.

I love these kinds of sunset... They are magical as they make you ponder. Sometimes about "Balance", sometimes about "hope" and most of the times about "missing something worthy" / I can sense the spherical shape of the earth in this photo.

@Elaheh: Thank you :-) I am glad that the photo stirred some emotions and thoughts in you.

Stunning photo! You master so well how to capture enening light!

An excellent image of slow speed with nice composition!!

A winning, high quality capture of the ocean mood.

Just a Magnetically Brilliant image here, Maciek....The line of sight that draws my eye right through and beyond that beautiful foam in the crack of the rocks.....and then it continues straight into the horizon and the sky,....It just grabs my eye/mind and pulls it right along....how Magnetic and Majestic... This is stupendous sir!!

@Denny Jump: Thank you very much, as always, Dennis!