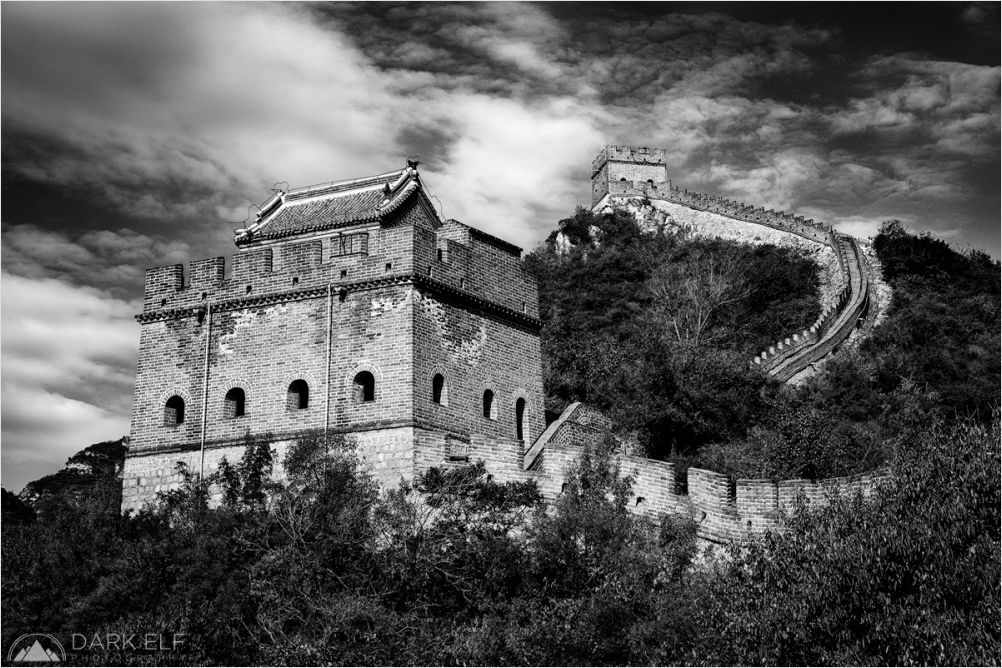 Posted by Darkelf Photography (Perth, Australia) on 5 November 2018 in Architecture.

Back on board! We have just returned from a three week trip to China. It was very interesting so see a place so different in terms of lifestyle to what we are used to back home. Combined with beautiful nature and plenty of history, they all made the journey highly worthwhile.

Given that we went on an organised tour, landscape photography opportunities were very limited and the weather did not help at times when I had a moment or two to venture out in search of the golden hour. Still there were plenty of street and urban photos to be taken along the way. In a way I was glad to focus on different type of photography. I can say though that I would struggle as a street/documentary photographer. I need to time to study my surroundings and here I was in constant rush to move from one place to another. That in itself was fine but it did not leave much time to make "artistic" decisions.

Climbing the Great Wall near Beijing was one of the highlights. Both in terms of the location itself but also because we arrived there early enough to beat the crowds and it was one of the very few places where we could take our time looking around.

As we made out way to the highest guard tower in this section of the wall, I spotted this composition in front of us. I think it illustrated the different levels on which the wall exists and I also liked the contrast between the bushes and the bright structures that accentuated depth for me in this scene. I tried to emphasise that contrast a little more in post processing through dodging and burning.

As I go through my photos I will try to pick out some more interesting ones. I think my main approach during the trip was to look for scenes that would work well in black and white and that might just be the main theme. I was able to photograph a beautiful waterfall as well as the Shanghai skyline at night so there will be some colour here and there as well.

I am not sure whether I will post photos from China in one sequence or more sporadically but I do hope that you will hang around to check them out and that you will find something interesting along the way :-)

such beautiful composition, perspective & clouds!
A M A Z I N G !

I like the angle from below. Very good BW work!

An excellent point of view and BW processing ! you did a very interesting trip in China, and you experimented a new way of photographing ! I am going to follow your report with a great interest !

Magnificent point of view on this part of the wall, very beautiful in B/W, I am looking forward to seeing the rest of your trip to China!

Just right in B/W. Excellent look at the wall.

Striking viewpoint and the B/W treatment is perfect

A splendid PoV which towers over the landscape! Beautiful tones accompanied by a dynamic sky.

@Steven: Thanks Steven. We were lucky to have a lovely clear day as well.

First of all - welcome back! You've managed this shot extremely well - the processing is superb. And the BW treatment spot on. Looking forward to seeing the rest of the series.

@dobbino: Thank you very much!

A wonderful scene and excellent B&W image. The sky adds even more drama to this exotic locale.

did you see her in Badaling or Mutianyu?
Mutianyu is much wilder and less touristy.
Almost 25 years ago, I had the pleasure of visiting Badalig; a precious memory

@yoshimiparis: I wish we could have seen it in a more remote area but I this is the only place we went to.

This must have been a fabulous trip! A beautiful image. A wonderful view highlighting the different elevations of the wall. I really like the monochrome. It really brings out the detail of the building.

I assure you, sir, there is Nothing that I have seen from you that does not impact me in some way... your work is just phenomenal. I LOVE your explanation tregarding what was in your mind as you composed this image.. your text is always so uplifting.
This is wonderful, sir!! ;-)

This small part of the wall is very impressive and beautifully framed and photographed.

@Lewis: Thank you very much for stopping by Lewis!

Looks like the wall is reaching the sky here :)

Another excellent photo of the wall. I had no idea it was so steep, nor that it had these beautiful guard towers. Excellent B & W work.

I hope you will post these in a sequence!

A perfect pov and the clouds go along very well with this impressive Great Wall!