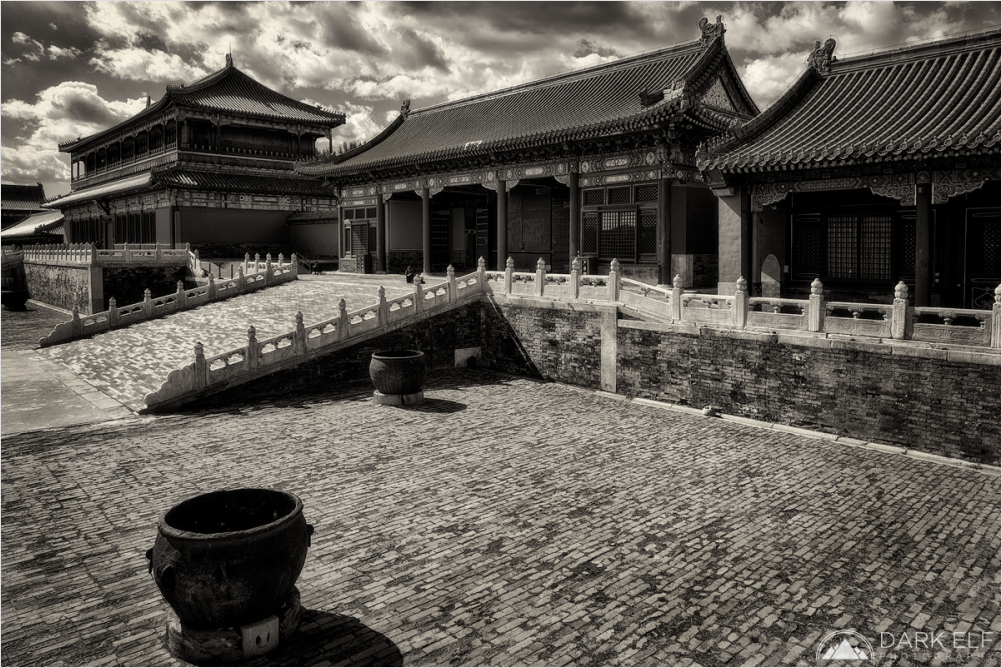 Inside The Forbidden City

Posted by Darkelf Photography (Perth, Australia) on 9 November 2018 in Architecture.

One of the most interesting places in Beijing and also most visited ones is the Forbidden City. It was no surprise that this is where our group went on the first day of sightseeing in China. It was obviously very busy with visitors scouring all around the massive compound and I kept looking for one or two quieter spots where people were not prominent in the scene.

I found one such spot on the side of one of the main squares inside the palace grounds. It looks empty but one had to be quick to take a photo without distractions. There were always people about and, as is common in touristy places, no one really cares that someone might be taking a photo and they just walk right in front of the camera.

I liked the arrangement of old buildings, the path leading up to them and the cauldrons scattered throughout. The texture of the pavement also suited my vision for a monochrome image. I also felt that gentle warm sepia would work better here than the traditional colder black and white. It added a touch of aged look to the photo to emphasise the fact that there structures were built a few hundred years ago. The light was the usual harsh midday sunlight but the sun was not at its highest yet and it worked reasonably well to give the scene good dimension through the shadow areas present in the image.

One really feels the passage of time in locations such as the Forbidden City, walking through the ancient grounds and trying to imagine what life must have looked like in reality all those years ago. I hope that this photo takes you back in time as well and makes you wonder about the past like it made me feel when we were there.

An image steeped in history. And a place where ideally a person should spend a day just seeing the effects of the light at different times. I suspect there is some real beauty hidden in the shadows under the coverings. So - only two shots down and already the urge to visit is there!

@dobbino: Thanks Rob. I wish we had more time there indeed...

a wonderful memory I got from this place. I only went once because it is almost impossible to visit everything (the places allowed of course) in one day.
Thank you for showing these pictures remind me of great memories of this trip made more than 20 years ago already.

@yoshimiparis: Thank you! I am glad I can take you back there again, at least in photos :-)

I visited this place and it is really difficult to make a photo without a crowd of tourists ! Bravo ! I like very much your choice of monochrome tinted of light warm sepia which suits well in this historic site
! If you allow me a remark, I find your framing "a little bit short" ! the shade of the foreground jar is cut and I would have liked a little more of this beautiful sky over buildings, maybe than a more wide angle would have been better ?

@Anna Cherer: Hello Anna. Comments and critiques are always welcome and I agree with you about the tight frame. This was as wide as I could go though. In hindsight, I would have loved to have a wider lens or to be able to find a slightly wider composition. If the foreground cauldron was more on the right hand side, that would probably work better as well. Sometimes you can only take what you can get at the time :-)

Thank you for your answer ! Yes ! We do our best with the various elements ;-)

Wonderful composition in this soft sepia that suits her so well! The architecture is magnificent!

Superb detail and excellent light for this image. 5*

A gorgeous image of this exotic locale. Great work on avoiding the tourists when shooting this.

Beautifully composed image. I like the pot in the foreground and the arrangement of the buildings. The architecture is beautiful. Wonderful textures. I really like the monochrome.

I really love your text here - especially about the feelings you experienced even with the multitudes of people....This scene is fantastic, sir...it really has a sense of time and drama to it!!! Bravo!!

@Lewis: Many thanks Lewis.

I visited there several years ago. I would love to go back to China with a digital camera instead of film. I was so limited with how much I could shoot because I was in China a month and could just carry so much film. We've come a LONG way with digital and what we can do with it.

@B. Thomas: So true Barbara. I am not sure I would ever get into photography if not for the digital revolution.

These details here really pop out in black and white - well done! I have to try as well :)