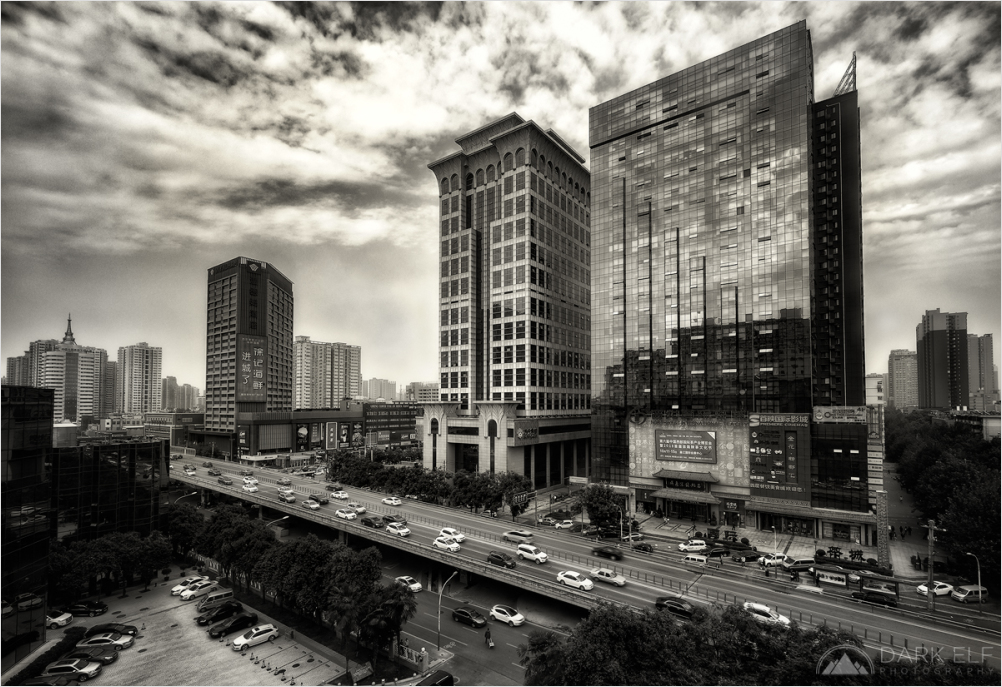 Just a simple cityscape today. It was actually the view from our hotel in Xi'an and in between sightseeing and dinner I looked outside and thought 'why not?'. The haze cleared up a little by the late afternoon but you can still see hints of it in the lower parts of the sky and in the buildings further away. I liked how it added a touch of dreaminess to the city.

Nothing really much to say about this one. Fairly straight forward composition where I used the street as the main leading line. Our hotels were mostly away from the city centres and I kept on hoping we would get one with semi-decent views. This one was the closest to such a view and you do not have to ask me twice to put my camera to some use.

I think the photo is in great contrast to the reality of city streets in China. They are always busy and always noisy with cars, trucks, scooter and bicycles roaming around seemingly without any order. This image seems a lot calmer, almost like someone froze the life on the streets and killed off all the urban sounds.

Interesting city levels captured together... I liked Xi'an - it was possible to understand the city center there.

@Vaido: I think that is because the new parts have only recently been developed. We liked Xi'an as well.

Definitely an unusually calm shot for China generally. I haven't really experienced a lot of the country (spent just a few days in Shanghai for my last company conference and my retirement farewell party), but I do remember that it was generally hectic in the streets. I do like the way the sun has brightened up the background and almost made the buildings more prominent. Seeing that lone figure on the bottom road reminds me of some of my fellow countrymen who fearlessly cross over three or more lanes on busy highways!

@dobbino: Cheers Rob. Once we worked out that it all kind of works and everything just flows, we were a bit more at ease when crossing the streets :-)

what you say is not wrong
In terms of traffic I find that the one we see is really fluid and there are very few vehicles compared to the streets of Beijing and Schangai that I have known.
The part of the city in which the hotel is bathed seems relatively new. Perhaps new constructions with the increase of tourist traffic and archaeological excavations of the plains surrounding the city

@yoshimiparis: Yes, these were new parts of Xi'an only completed not long ago. Thanks for your visits and insights - I appreciate your interest a lot.

It's a beautiful view and a good example of what become Chinese modern cities with all these recent high rises ! An austere and sad atmosphere I find, strengthened by very beautiful BW and dramatic sky !

A beautiful sky to complete this wonderfully toned image!!

I can not help thinking that it could be Detroit, or Milan, or Caracas .... globalisation = homologation !? I do not know if this hypothesis I like or frightens me
very realistic shot !

@Jaya: Thanks Jaya! Yes, I agree that many cities can look very similar. Especially so, where there are no unique skyscrapers or architecture present.

excellent tonal range and great contrast with that energetic sky

A beautiful capture and view of this modern Chinese city! The monochrome is really well chosen and suitable for this bad weather atmosphere!

A superb image of a fast changing China. A very well taken image, 5*

I think of China as very crowded but, this skyline seems fairly open. I know what you mean about the traffic and pedestrians though. Anyway, I enjoy this excellent photo.

A beautiful view. I like the reflections of the clouds in the windows. The wonderful sky really enhances the view. A great capture of the city.

Wow, this does look really calm compared to the Xi'an I saw - crazy traffic, noise, and very dirty air. And a ga-zillion people. Nice cityscape.

Your work continually amazes me.

The black and white and this sky make for an intense drama in this mage. Superb work.

So you had a room with a view.
Very nice in b/w.

I agree with Steve,,,having never been to China, but knowing many who HAVE been there, This scene is strikingly imapactful!!! I absolutely love the exposure and "Look" of this image....Beautiful!!! ;-)