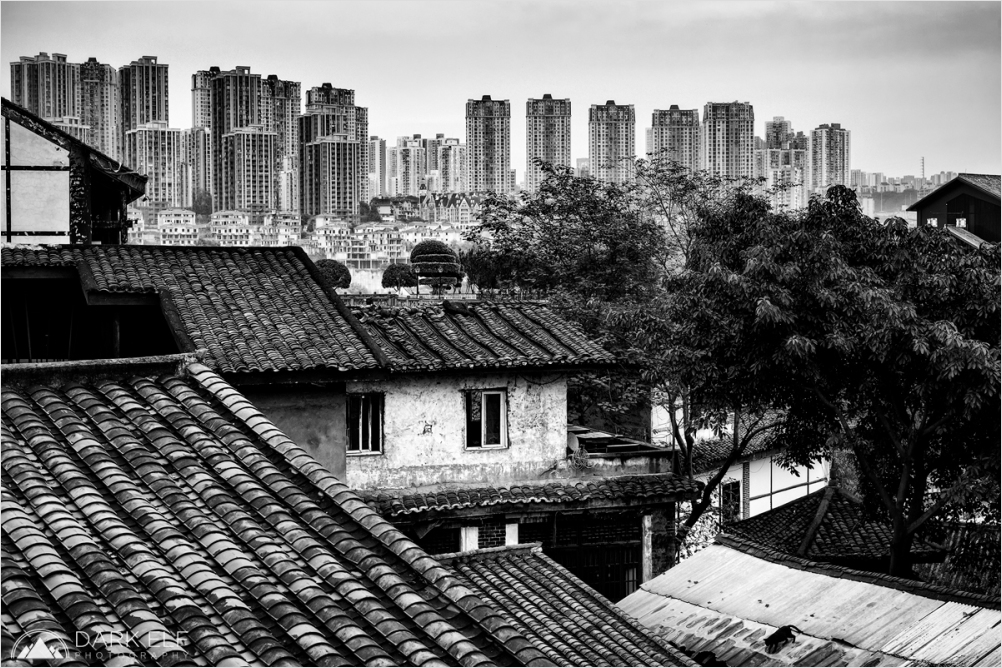 Hello! Time to get back into swing of things in 2019! Hope you all had great Christmas and New Year. We have returned from a little trip to the south coast of Western Australia that we enjoyed very much. For now, I am resuming my photo series from the earlier trip to China. I will endeavour to post a bit more regularly, especially since we have a lot planned for the second half of the year and that will mean a diminished presence on the internet during that time period.

This is a little composition from a city previously unknown to me - Chongqing in south west China. It just shows how little sometimes one knows about the world. This is China's biggest third biggest city by population and during (and after) the Second Sino-Japanese War it was Chiang Kai-shek's provisional capital. Well, I admit, I never knew that.

I liked the arrangement of rooftops, older style house and modern skyscrapers in the scene that I saw as we were walking out of a restaurant. Gloomy and hazy conditions made it instantly appealing for a black and white photo. I especially liked the detail and texture provided by the roof tiles and the contrast that modern buildings added in the background. It felt like looking at two different worlds. The quiet old suburban dwellings against the new age busy, packed apartment buildings. There was just a touch of haze on the ground level and that gave the skyscrapers a little bit of extra separation to enhance the feeling of disparity between foreground and background.

Chongqing was a really crazy place! Imagine a city with nearly a population of Poland :) And I had never heard of it, too. Well arranged old and new city here.

@Vaido: Cheers Vaido! There was so much construction going on as well. It is going to be even bigger!

Welcome back - you have been missed! This is a perfect example of juxtaposition in a photograph working! The combination of the old versus new is just stunning! I would image that with those roof tiles, this would loo great in colour as well?

@dobbino: Many thanks Rob! The roof tiles were rather monotone, of darkish greyish dirty brown hue, and I do not think that colour would actually bring in too much here. If they were of nice hues of red/bronze, then possibly :-)

Excellent look at the old and New buildings. Very interesting information with this image.

what a contrast. I know which part I would rather live in :)

Impressive contrast between modern towers and these small houses with tiled roofs! The new city seems gigantic! The history of the city is very interesting!

@mo.langel: Thanks Monique! Just imagine that the skyscrapers that you see here are multiplied at least fifty times and then try to understand how huge the whole thing is! I could not believe it.

I like how the B&W really highlights all of the graphic lines and textures/patterns.

An amazing contrast between the old and the new! A beautiful composition.

An eye-catching composition incorporating the old with the new here!! Beautiful tones and contrasts as well.

What a tremendous Story being told here!!! The backdrop of modernity looking over the houses and homes of those who live here...This is a really amazing story and image, Maciek.....
Chers to you both ;-)

A stunning contrast between the old and the contemporary buildings!

A dramatic contrast between old and new. I enjoy that gritty feel this beautiful B&W carries.

An excellent framing and contrast between old and new, the BW suits well !
Enjoy your 2019 year ;-)

I got to visit Chongqing in 2001. I was 3 weeks into a 4 week trip in China and I was tired and a little homesick since my husband didn't go on the trip. I really didn't enjoy this city as much as some others, and maybe that was why. It was so large, crowded, and very overwhelming. I like your POV for this photos, showing the contrast with the huge buildings.

This photo has been featured in an Aminus3 Photo Challenge: Parallel Worlds