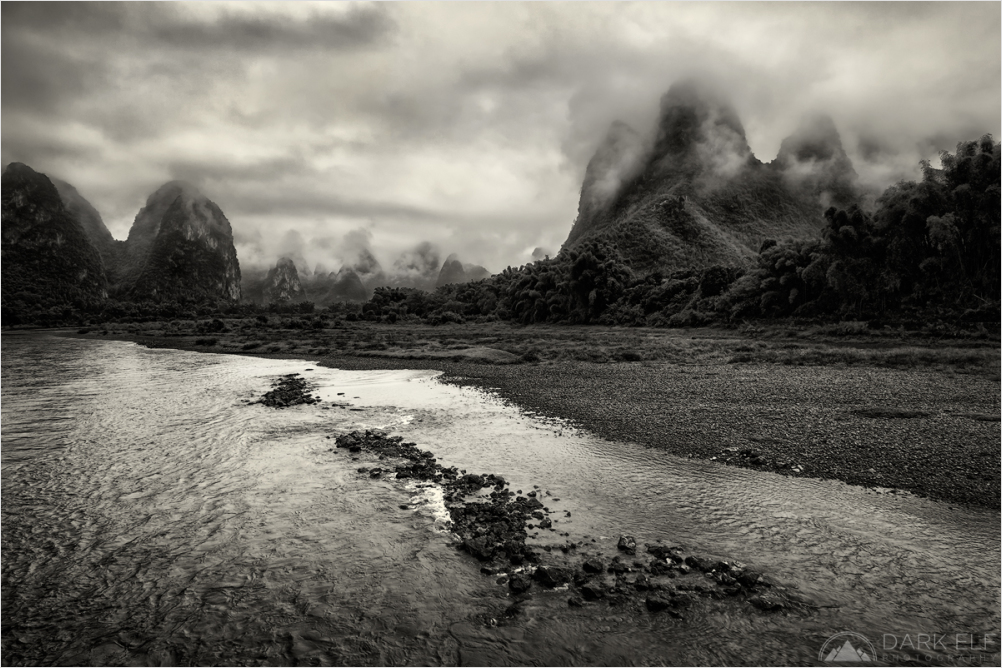 During our China tour we enjoyed a short cruise on Li River between Guilin and Yangshuo. The cruise took us through one of the most picturesque regions of China, littered with rolling hills peeking over the horizon in every direction. As you can see in the photo, the weather was unfortunately rather bleak. There were thick low level clouds and there was a bit of rain about as well. I cannot complain too much though, these hills still had something magical about them even in the conditions that we encountered.

In this photo I wanted to portray the mysterious atmosphere that gloomy conditions and clouds imparted on the hills and the river. We could see clouds swirling around the peaks, weaving their way through and engulfing the peaks. It seemed like being on some lost world, something equivalent to Jurassic Park almost in nature and atmosphere. That is of course, if you are willing to remove from your mind fifty other boats in the procession that we were part of (which I was able to do after the initial shock of seeing all of the boats lined up in our departure dock).

While taking in all the scenery, my main focus in terms of photography was looking for compositions that could later work well in monochrome and tweaking camera settings to ensure that photos came out sharp in low overcast light. The boat was moving slowly but it was still sufficient enough to introduce motion blur, especially in objects located closest to us. Luckily, these days the cameras are much more capable in terms of dynamic range and it was possible to keep the ISO down to 200/400 and shutter speed to around 1/100 sec, knowing that you can recover a lot of dark areas later post processing.

This is one mysterious place, and photo holds that mood perfectly.

A magical place ! the bad weather and your choice of monochrome gives a mysterious and gloomy mood !

A superb mysterious atmosphere wonderfully captured! The place is beautiful and wild!

Many mystery moods in the picture. Amazing landscape, top in b/w. Absolutly five stars for me!

Karst limestone landscape from the look of it, always good for drama. Nicely treated and composed

A superb capture of the mist around the mountains. Excellent treatment.

A spectacular image. It must have been amazing to see this landscape. The low hanging clouds over the hills creates a very mysterious atmosphere. I really like the use of monochrome. It further enhances the atmosphere and the eerie feeling.

I can't remember seeing photos of karst topography in China and Vietnam in b&w. Wonderful!

A fantastic atmosphere with the clouds swirling around all these peaks. The image certainly imparts a mysterious mood indeed.

this image is superb, even if one feels oppressed by the clouds

@yoshimiparis: Thank you :-) That's the way they felt when we were out there.

A remarkable and mysterious landscape! I love the toning ...
Congratulations :-)

Almost missed this one Maciek! Looking at this scene, it's almost impossible to imagine that you weren't completely alone, with no-one around! And I think you did achieve the goal of capturing the mysterious atmosphere - it looks desolate and gloomy, and slightly ominous!

Well, I absolutely LOVE this presentation, Maciek!! The drama and presentational feeling that this scene emits, is just fantastic..The clouds rolling around, the light mixed with dark...Just Outstanding! This is a Spectacular presentation, Sir!!! Thank You ;-)

This seems to be a place of mystery because of the low clouds. Congrats!