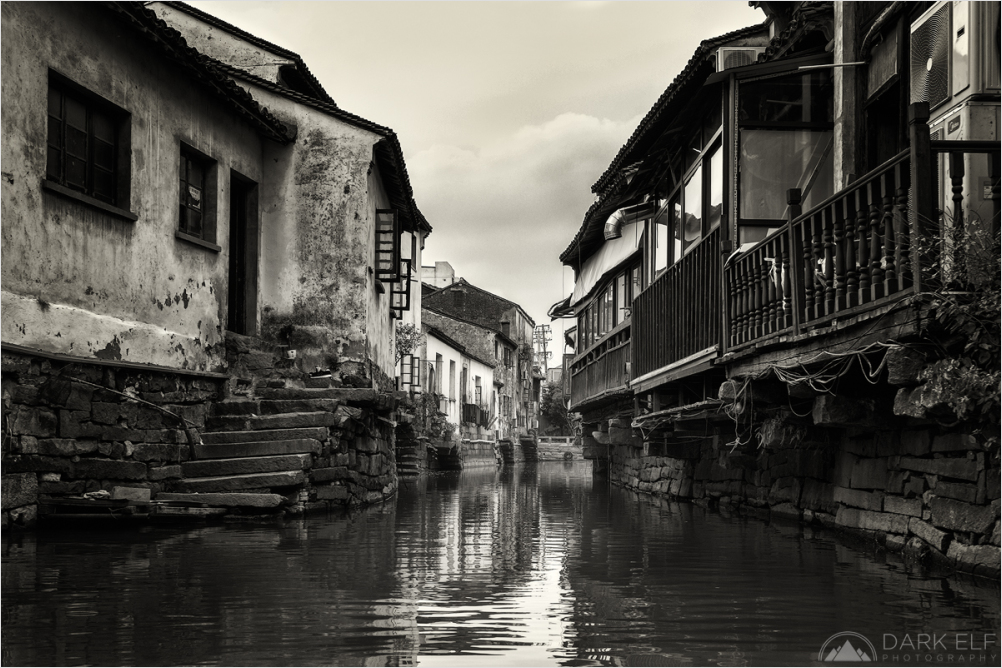 This is the scenery along Suzhou section of the Jiangnan Canal, which is the southernmost section of Beijing–Hangzhou Grand Canal. The Grand Canal is the longest as well as the oldest canal or artificial river in the world. It begins in Beijing and links Yangtze River and Yellow River, terminating in the city of Hangzhou. We enjoyed a slow cruise along the part of canal which is still inhabited by local residents and it was an insightful experience to peak a little bit into their private lives and dwellings. It was another part of China that I have not heard of before and it was a fantastic discovery. I can only imagine that there so many other little intimate locations like this hiding all around China.

The canal was very narrow in places and we really felt like we were almost inside the small houses and looking into someone's living quarters. It was a quiet day with not too many people around. We did see someone doing some washing on the shore but otherwise it was very peaceful. That made for a great break from the busy city streets we encountered everywhere we went.

The boat was very low and the sitting deck was actually below water level so we had a perspective right from the canal level. It gave a bit more height to the buildings surrounding the waterway. I hope I was able to convey the closeness of the houses to the boat. We could touch the walls in many places and if we wanted to we could easily jump out onto the stairs leading down to the water. I particularly liked this spot where the canal was getting narrower and the shores were converging in front of us. There was just a hint of haze in the distance, which helped to work the atmosphere of this interesting place.

A beautiful perspective and atmosphere ! it's the " secret China " !

Another superb image. I wonder if this canal rises during heavy rain causing flooding to these houses. A superb image and so good in B/W. 5*

@Shaun: Thank you very much Shaun :-)

an interesting capture and experience of a fast disappearing world

Very nice angle of view in a very nice BW! It is a wonderful and very interesting trip you have made!

A fine black and white capture of this sad place Good exposure into the darker areas.

The dark contrasts are full of interest. I also like how the water draws my eye

Perfect low pov! Like I'm sailing a boat through the canal ...

I like the detail: below the balconies, the crooked steps, the decaying paint......takes me there

A fantastic image from water level. A superb perspective and a great adventure along the canal.

A different kind of street... A truly timeless moment here.

Wonderful capture of the canal. The B&W is generating a fantastic quiet mood.

Absolutely adore the mood you have captured here. As usual the composition and toning is great. No real reason for it, but I find I'm left with a sad feeling. Looks like the place has seen some tough times.

@dobbino: Cheers Rob! There is no doubt that I was going for more melancholic moods with my black and white takes on China.

Fascinating. Yes, the image captures what you describe. I had no idea that this canal existed.

A wonderful composition and superb angle , just if we were with you in the boat !

A wonderful view of life along the canal. I like the narrow part showing the buildings on either side and the light and reflections on the water. This must have been such an incredible trip.

@Elaine Hancock: Many thanks Elaine. It was certainly an opening experience to visit China. So many different places and such different culture. Might go back again one day if we get the chance.

Yes, a wonderful water-level perspective here, as both you and Steve note.. Such an amazing and impressive feeling here, sir! Some decades ago, I was working on a project to build a power plant for Hangzhou. I am embarrassed to say that I cannot remember the specific companies, etc...but I am sure it will come to me...With my advancing age, I am, unfortunately impacted, somewhat, by memory issues..but it will come to me:) i DO remember that the projects were incredibly interesting ;-) Awesome shots here, Maciek...Your work is so fantastic. Thank you for blessing us with this images ;-