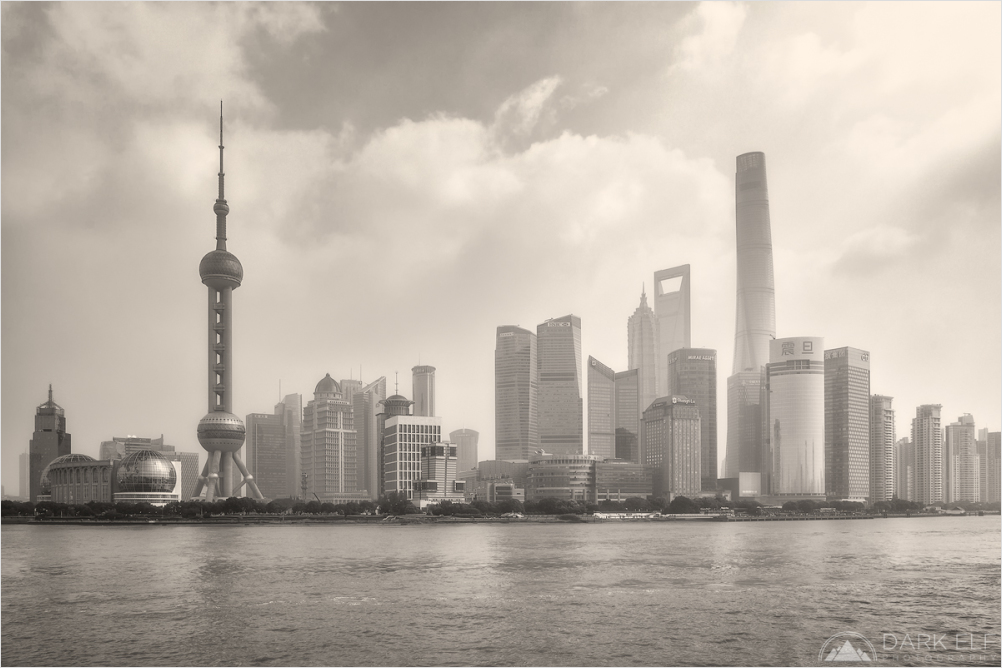 When we arrived in Shanghai towards the end of our travels in China, it greeted us with the kind of haze that we expected early on in Beijing. The centre was hardly visible from a distance and even when walking along Yangtze River, the skyscrapers on the other side were shrouded in humid haze and pollution. When I saw them, it made me think of an opportunity for a more of a high key image that emphasised the thick air and limited visibility.

I have not seen too many photos of Shanghai skyline beforehand and I was very impressed, from the modern city perspective. The skyscrapers stretched along the river and perspective kept changing as we were walking along. There were many possible vantage points from where to take a good cityscape. I picked this particular composition to post because I liked the balance between the TV tower on the left and the Shanghai Tower building on the right and how they reached up into the clouds while framing the rest of the city between them. This view also offered a good spread of the structures along the river.

Shanghai Tower is currently the second tallest building in the world behind the Burj Khalifa in Dubai and it is definitely the dominant feature. The TV tower, also known as Oriental Pearl Tower, is also very eye-catching with its rocket like futuristic design. There were some other rather tall towers hiding behind. You can see the "bottle opener" building (Shanghai World Financial Centre) and right next to it the Jin Mao Tower. The fun fact about Shanghai is that the number of people living there is equivalent to entire population of Australia (25 million), while the area of the city is roughly the same as my home city of Perth which has a population of around two million. Talk about a difference in population density!

@Anne: That is the way of the world today Anne. Always looking to go higher, longer, better...

An amazing skyline of this crazy city ! We recognize the famous high buildings, TV Tower and bottle opener ! I also like your soft high key BW which suits well to this atmosphere !

An amazing shot of this gigantic city that reminds me of a science fiction movie! Excellent and vaporous BW that suits this view well!

A superb capture of these magnificent buildings. I really like the haze covering the city. A superb image. 5*

A gorgeous view of the skyline! And a good choice of PoV to balance the image. Interesting to learn of the pollution.

I haven't seen Shanghai skyline either... A hazy one, indeed - with most impressive buildings.

@Vaido: It got better over the next two days, but the first one was very hazy indeed.

Composition is great - as is the framing. This one is a big step away from the rest of the photos you have posted so far. But you have certainly achieved the effect you set out to achieve. Everyone's different (and thank goodness for that!), but for me this image is the first you've posted that isn't overflowing with "soul".

@dobbino: Cheers Rob. I think that moving from intimate moody city streets and scenes to a very much cold modern city skyline can have that effect.

A beautiful view of the hazy city. I've experienced even worse haze and smog in Hong Kong. From the air, it seems the smog drifts into Hong Kong from the mainland.

@Steve Rice: When we visited HK ten years ago, we had reasonably clear air. The worst one we experienced was Singapore, I think. That was in 2015 when there were huge fires burning in Malaysia and all the smoke was being blown right across the city. The air was almost brown as the time.

I remember my trip up the Pearl Tower, and how much fog and haze there was over Shanghai. This is a beautiful shot and brought back fun memories for me. We had a few sunny times on the Yangtze River, but mostly cloudy and haze. That was also just before I got my first digital camera, and film just is not as forgiving. I have often thought how I'd like to do that trip again with my current cameras.

@B. Thomas: Sounds very similar to our trip Barbara. We had exactly the same on the Yangtze. We were pleasantly surprised though, to have a couple of lovely clear days in between the haze.

@yoshimiparis: I am happy that it brings memories and wonder how different the city must have looked back then.

I love the mood you have captured in this skyline. The tones are beautiful. The tower certainly captures my eye.

Exceptional photo and the tones are incredible.

Aah yes that heat haze is both disconcerting and exciting to capture on camera. Great work.

Oh, this is absolutely fantastic... the must and haze really provide a drama that is great!!

Excellent photo in soft grey with the dramatic effect of haze !

Wonderfully hazy and therefore so soft!!! A well balanced composition ...

Such an interesting skyline. It almost has an other worldly feel to it. The haze creates an almost mysterious feel to the image. 5*