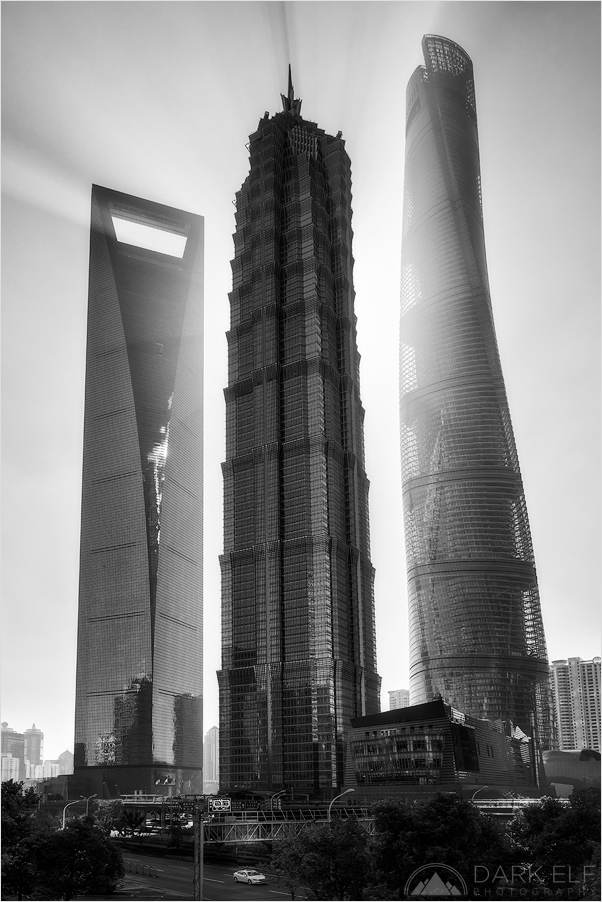 Posted by Darkelf Photography (Perth, Australia) on 11 February 2019 in Architecture.

Previous photo presented the Shanghai skyline from the opposite bank of Yangtze River. Today I am getting in between the skyscrapers, right at their feet so to speak, where it was possible to truly appreciate their height and construction. The three towers are the ones I mentioned last time - from the left: "bottle opener" aka Shanghai World Financial Centre, Jin Mao Tower and Shanghai Tower. This was our last morning in China and the air quality and clarity were much much better. We were able to see the detail of each building very well.

The slight haze, or rather glare, effect that you can see here comes from the sun hiding directly behind the middle tower. I liked how the intense sunlight was spreading around the central tower and how it was reflecting off the other two towers to create interesting visual effect such as rays, glow and reflections. Back light also helped to create good contrast between the three structures. I kept the taxi going along the street at the bottom to hopefully show a little bit of scale. It is easy to understand the height and size of these towers when you are standing right next to them, but it can be often a lot harder to achieve similar result in photography.

I think this might be the last monochrome for a little while. I feel like it is time to bring back some colour into my posts ;-)

This is truly magnificent! Can't believe you got that all in with the 24mm (I presume you use the normal 24-105mm lens?). I must say I've enjoyed the monochrome images, but even though I enjoy bot mediums, my first choice is colour, and I'm looking forward to the next series.

@dobbino: Thank you Rob. Yes, the 24-105mm is my first choice walk around lens and always goes in the bag unless I have other specific plans. 24mm was just right here with the towers filling the frame but enough space to straighten them out just a bit in processing (I was looking quite a way up). Colour is my preferred medium too but given the dull hazy light, I gave myself a challenge in China to try and look at world through monochrome "glass" :-)

up close and personal. great rays

Fantastic height and light!!!! That car seems so tiny ...

Just magnificent. A great look at these fabulous buildings. 5*

A fantastic choice of framing! Stunning!!!

Excellent image of these amazing structures. You captured their height and their individual style.

A wonderful image of these towers. I especially like the twist in the right one. The light is remarkable.

@Steve Rice: Thanks Steve. The twisting tower was great indeed but I also liked that all three had a different style to them.

This is magnificent. A stunning image! The haze really adds to the atmosphere and I feel enhances the image. These are amazing structures! 5*

Amazing towers, Maciek! It is really interesting how different architects can make make a variation on the same theme! Beautifully composed sir!

oh! I missed this one ! superb framing on these three impressive and all different towers! I love the halo in the sky around them and the BW works well ! You were able to capture the whole height.

I went up to the top of the left one (the right one didn't exist yet)
It was very impressive (at night).
Superb light.
Well done.

@Jean-Luc.M: The urban landscape is ever changing in all major cities around the world. Thank you Jean-Luc.

I've seen quite a few photos of these buildings, but there's something about the haze/glare effect combined with the black and white that makes this image special

It has a majestic impression... maybe because of the hazy atmosphere...