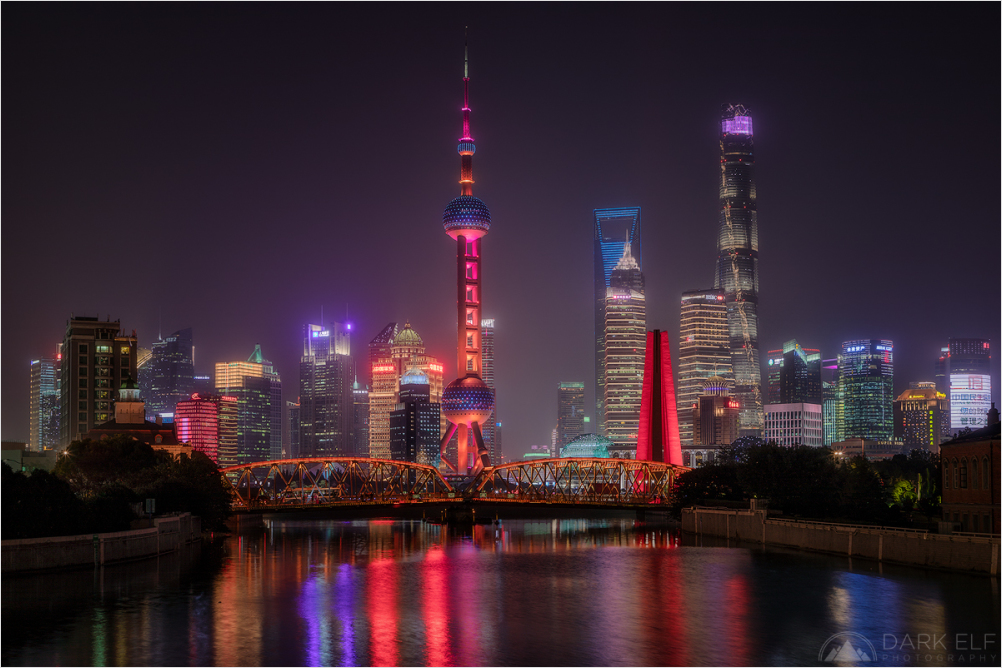 Posted by Darkelf Photography (Perth, Australia) on 18 February 2019 in Cityscape & Urban and Portfolio.

Colour is back! I am again going through my China photos now and trying to pick out another selection, this time of colour photos that I would like to present to you.

I am staying in Shanghai for today's post but presenting a different vision of the city skyline, compared to previous monochrome images. This one has a touch of Blade Runner mood to it and hence the title. I remember watching movies back in the eighties where various visions of the future were presented and the cities often looked dark, glowing and with strange futuristic architecture. In some ways that future is now. Looking at Shanghai city at might, I could not help but feel taken forward in time.

I played around with some on camera filters for this photo. I used what the manufacturer calls a "natural night filter (light pollution filter)". It is designed to remove wavelengths from common sources of light pollution. It was the first time I used this filter and I was interested what kind of results it could produce. What it did was to remove the bright green/yellowish glow and tinge that was present in an image taken without the filter. It also gave a bit more blue and red to the scene. I quite like that effect and it fitted with the mood that I wanted to photograph.

This is almost entirely a single exposure. I only used a darker frame to reduce the luminance of the brightest light and signs in the buildings. I did not want any overblown and distracting elements. I took another photo from the bridge which you can see just below the tower but that bridge was actually shaking a bit with people and cars passing by and I was unable to get a sharp result. We just walked along the water a bit further out to find a more suitable spot.

I hope you like my night filter experimentation. It is definitely a technique that I will apply in future night city photography.

Stunning night view with the beautiful colours reflected in the water.

Like a frame from a science fiction movie :) I think the filter did a good job here.

Such a wonderful setting…

A great view at night ! the filter gives a beautiful rendering of lights and colors !

This is fabulous - and Shanghai does look great in colour! I'm interested in the "in camera" filters you mention - must have a look but I'm almost sure my Fujifilm doesn't have those... Anyway, your title is spot on, and I really like the end result. Being naturally inquisitive, I would be interested to see the photo before the filter was applied. Now really looking forward to the rest of the series.

Awesome colors and reflections captured in this nighttime skyline! Great work with the filter.

A magnificent image of the city at night. Superb color. 5*

The color and reflections od color are superb

Superb night view with these colors and reflections!

This is a magnificent composition and incredible view of the city. Those buildings are so futuristic. A spectacular night image with gorgeous color. 5*

This is gorgeous! I think your experiment was a great success.

it is true that some cities really take the road of fufut with an architecture totally different from those that we usually see.
Very beautiful picture

Fabulous colors and refelctions!! Remarkable building in the middle ...

An interesting commentary. The picture and title fit well. The picture shows a lot about what the future is about in the 50's sci fi novels.

The lights and colors are excellent

The image captures perfectly the beautiful colors and atmosphere of this magnificent city. Great use of reflections as well. Well done!

It seems a magic world. Amazing tones and reflections

This one is fantastic too!