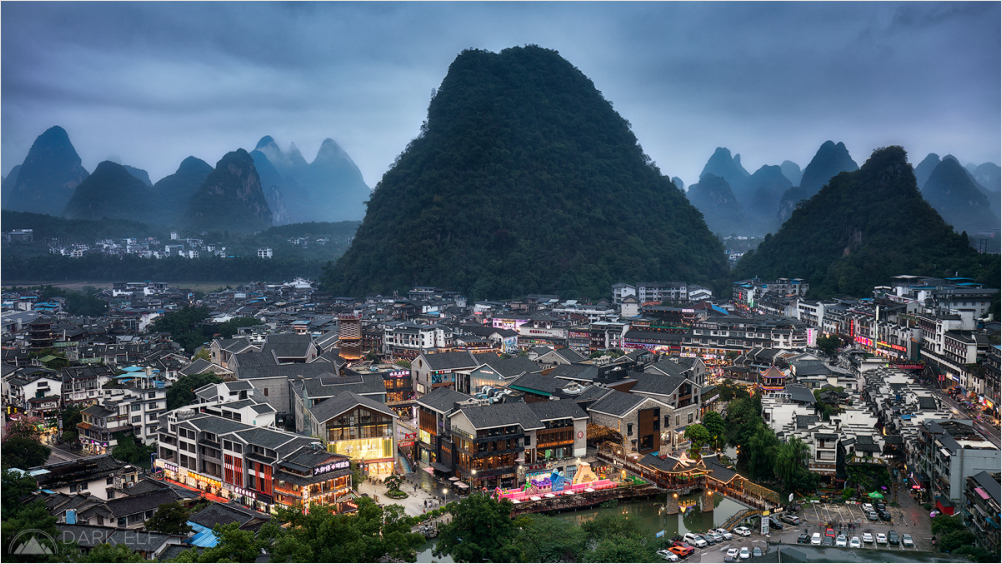 We did not get to see Yangshuo in lovely sunlight with beautiful golden hour light but we still loved the experience that we had. As long as the clouds kept high enough to reveal the landscape around the city, it was still a magical sight and gloomy weather added its own special atmosphere. We had half a day free after the walk through the rice fields and we used it to explore around the town. From our hotel window we spotted a small shrine atop one of the smaller peaks in the city. It took us a bit of time but finally we figured out the path to climb to have a look at Yangshuo from above. We walked around the hill from each side possible before we realised that the entrance point was where we originally started from.

As we were climbing to the top, the city kept opening up around us and every next vantage point looked better and better. The next thing we noticed was the endless range of mountains reaching way out into the distance as far as the eye could see. The view was out of this world. It gave us a true perspective on how amazing this area really was. Seeing the formations from the ground is one thing but seeing them from an elevated perspective was something entirely different. It felt like the city was just so isolated by surrounding peaks, which were hiding in the clouds and mist. You could not find this stuff in a fairytale.

Once we made it to the top, I instantly had an idea for what I wanted to photograph. I wanted a perspective over the city with the mountains lining up in the background and fading gently over the horizon. I also wanted to photograph the tonal contrast between the warm lights of the city and the cooler blue gloomy air in the background. I would have loved to stay up there a bit longer and let the darkness take over the city, however, we were a little pressed to make it back down to the hotel in time for dinner. I considered staying and skipping dinner, which would have been fine by me. In the end, because I did not have a flash light with me, we decided to make out way back before dark. It was rather wet and slippery on the worn out steps, so the risk was not one I was willing to take at the time.

I think that we managed to stay there just long enough for me to photograph the contrast in tones that I mentioned before. The lights had enough of an impact and the darker atmosphere around the peaks was just what I was looking for. I tried to accentuate it just a touch more in post processing. It was one of my favourite photos so far in terms of processing work. I mostly worked with dodging and burning to bring the city out a little bit more and to get the most of magical misty mood in the surrounding landscape. I remember standing at the top to take this photo and thinking how I would go about processing it at home. When working on it later, these thoughts came straight back to me and it was a very intuitive and natural flow that guided me. It is customary for me these days to get a few different exposures of the same scene and I used a darker exposure to control the brighter lights in the city to ensure that they were not too blown out.

It was our favourite view of the entire trip to China. Well worth the effort to find it and I am very happy with how the final photo turned out.

This is such a crazy place, perfectly framed! No wonder you named it a favourite view.

I would absolutely state that your visions are borne out here in this wonderful, wonderful image, sir! As I read your text and followed along, in my mind I was smiling the entire time!! I can certainly see why you were so "taken" with this fantastic view! And WE, your viewers and friends, get to benefit greatly by your unselfish words and presentations! This is just fantastic and i am so very glad that you were able to do this and that you presented this to all of us....We are so fortunate..

@Denny Jump: Thank you for your very kind words, as always, Dennis!

Ah Maciek - this was worth every minute you spent getting and then making the image! Looking at the buildings, I would not have guessed China! Just demonstrates the vast differences in just about everything over there. And those endless mountain peaks add such a contrast. Thanks for all the background information - helps put the shots into perspective.

@dobbino: Many thanks Rob. I just hope that what I write makes some kind of sense ;-)

Amazing and wonderful view ! A great point of view on the city as well on the layers of mountains in the distance ! A beautiful rendering of the atmosphere, the different light and colors. It's incredible how the city is built around the mountains ! I can easily understand your pleasure to discover this place from this high point of view !

Blikvanger from from, Belgium

quote: "And WE, your viewers and friends, get to benefit greatly by your unselfish words and presentations! "
And so it is! Thanks for that.

What a wonderful view of the city and the mountains in the background, these mountains remind me of sharp hats! I understand the enthusiasm you have had as you climbed up and discovered this wonderful landscape in front of you! It's a very nice picture and a very good report!

@grouser: It was an amazing sight indeed.

I think you should be well pleased with this excellent picture. A superb look at the city. 5*

The way those hills arise throughout is intriguing. Beautifully composed and presented.

This place is beyond imagination ♥ ♥ ♥ Beautiful landscape in the background!

A gorgeous image with the peaks springing up like mushrooms in the city. The colors are marvelous.

I really believe that you accomplished what you had envisioned. This is a magnificent image. I think that it is amazing how the town is just built right around the mountains. I love how the mountains just fade into the background. What an incredible place! 5*

it's strange. The first thought I made while looking at your picture; it looks like a model of architecture .... miniature houses

Nice—what a cool location! Definitely worth the effort to climb to the top.