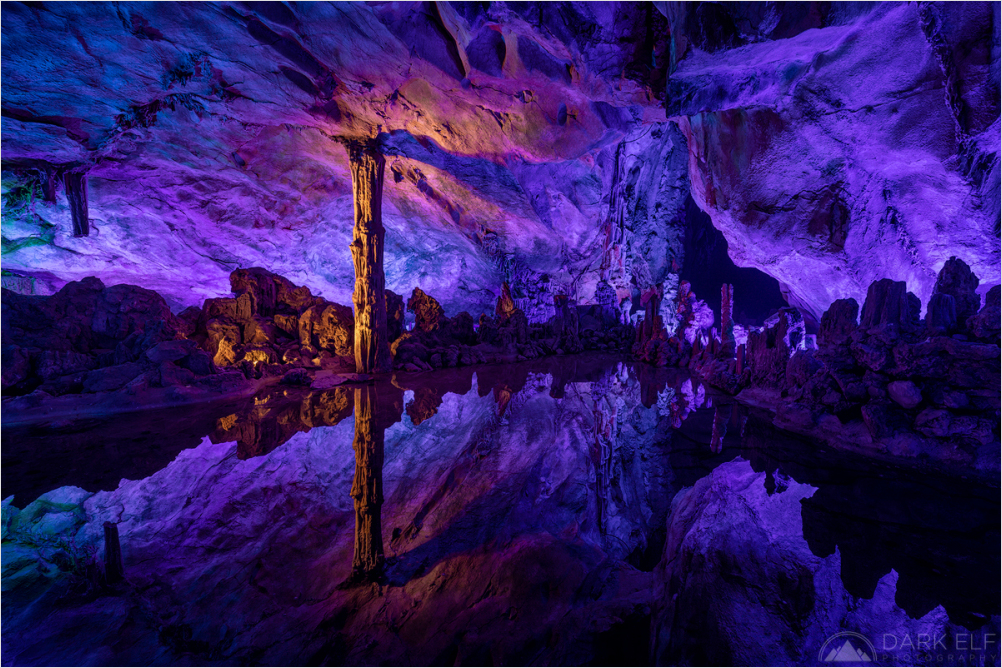 Reed Flute Cave is a natural Karst limestone cave and has been one of Guilin’s most interesting attractions for over 1200 years. The cave is named after the type of reed growing outside, which can be made into flutes. It is filled with a large number of stalactites, stalagmites and other rock formations, as well as lakes and ponds. They are all illuminated by multi-coloured lighting, which creates an amazing visual effect. It is like stepping into magical fantasy land.

In between various tour groups trampling upon each other, I was able to find a free spot here and there to take some photos from a tripod. This section is in one of the main chambers of the cave, which was once used a bomb shelter that could protect around 1000 people. As far as I am aware, there is no natural light inside and hence the artificial illumination. The multitude of colours can make the cave feel a touch fake at times but it is still beautiful nonetheless, especially for someone who has not see such illumination before.

Once I found a bit of space, taking the photo was very simple. I took some bracketed exposures that I combined later in post processing to ensure that I had good dynamic range of tones in the entire image. I did not use any additional filters and other than basic RAW processing, exposure blending and contrast tweaking, there was no need for any further work.

We have not heard of this place before we visited and therefore this is was nice discovery along our travels through China.

I've been there, incredible lights!

Wonderful creations by nature can be found...

Hammer effect. Excellent capture inside of this cave. 5*****

A beautiful rendering of colors, light and reflections ! an amazing place !

Very beautiful capture of this cave, the reflections, colors and light are superb!

A stunning image! The colors are enchanting. I especially like the large column on the left and the super reflections.

An incredible image! It is so magical. The reflections are gorgeous! 5*

You're right it's a really awesome discovery. The picture is fine and you have managed it well.

So Amazing and beautiful! The color is incredible! And, as always, your narrative is so fantastic!!! Thank you for this one, sir!