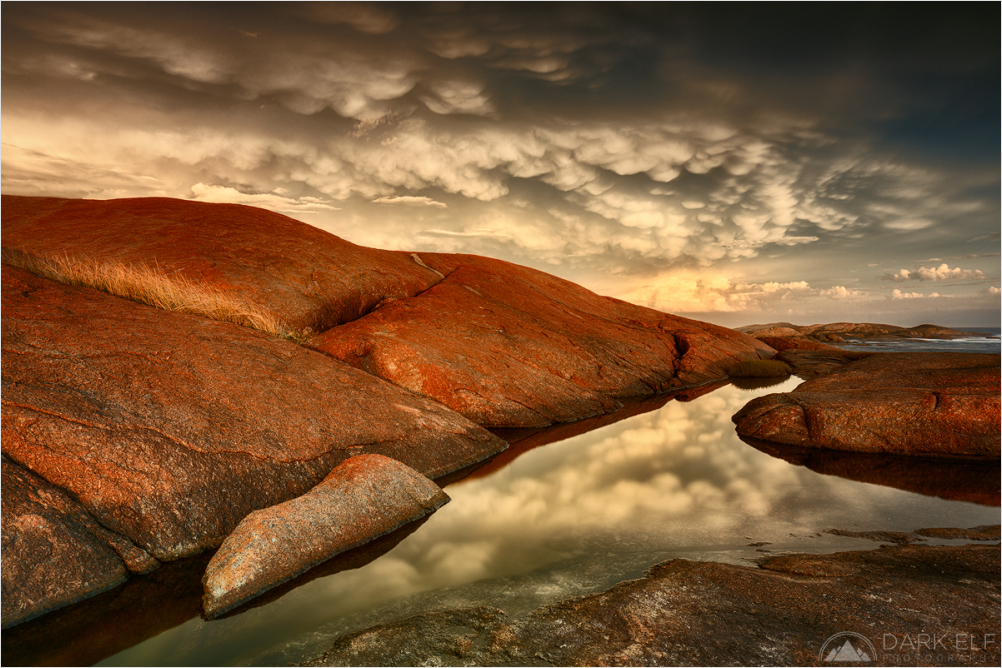 Posted by Darkelf Photography (Perth, Australia) on 28 May 2019 in Landscape & Rural and Portfolio.

It is incredible what nature can sometimes produce, just like these strange and alien looking clouds over the south coast of Western Australia. This photo comes from the Elephant Cove near the town of Denmark and was taken on the same evening as this one. This is a scene directly opposite to the previous view towards Elephant Rocks and I photographed it a little bit earlier before sunset.

Passing storms produced a stunning display of clouds, light and colours throughout the evening. When I was taking this image, the sun was low over the horizon and the rich warm Martian colour tones were just beginning to take effect. This is also then the clouds were at their most pronounced in terms of their shapes and 3d appearance. Earlier the contrast in the sky was very subtle and it was hard to make out the shapes. After sunset the wind picked up and took away the texture which you can see here. The pool of water was also still enough and that allowed for the clouds to be nicely reflected, adding extra texture and dimension.

Compositionally, I had to move around the pond while trying different angles and height perspectives to get the clouds reflected as I envisioned them and also to get the landscape lines and angles to work together in harmony. I am a very intuitive person when it comes to composition. I have the basic rules at the back of my mind but I always go with what in the end feels right or natural to me.

The challenge in post processing was in trying to get the colour to look how I saw it rather than how the camera did. The sensor recorded a scene which was very very warm and saturated. I decided to keep the clouds and reflections more neutral in tones and allow the granite rocks to retain some of these rich copper hues, enhanced further by the setting sun. I did some adjustment to individual colours, as well as, split toning of highlights and shadows to get a result that I was looking for. It often meant doing a series of tiny tonal changes and then assessing their impact. A number of times I had to go back a few steps when I felt like it was going in the wrong direction.

It was a really fun scene to photograph as well as to process later on at home. I was already thinking ahead to processing as we were driving back to our accommodation afterwards. The impact it made on me was very strong indeed.

Incredible colors and light ! excellent composition with the reflections on the pool of water, and dynamic sky ! A beautiful rendering like another planet !

@Anna Cherer: Thank you Anna. I appreciate your comments greatly :-)

More extraordinary sculptura rocks. I can understand how the cove gets its name. Excellent light and colour composition

@grouser: Many thanks Grouser. These are the "smaller" rocks but the ones that were direrctly behind me (and photographed in the linked earlier photo) are the real elephants :-)

This is just stunning. The colors of the rock are incredible. I love the cloud formation and how they are reflected in the water. Absolutely beautiful! 5*

@Elaine Hancock: Thank you so much Elaine!

A very otherworldly image. The colors and reflections are superb.

this is a wonderful scene. that ominous sky inspires dread and the rocks have very good color and texture. I think you might be a bit short of the "magic" you usually display as I think a little over sharpening or other adjustment has created a thin white rim between the rocks and water that make them see placed there rather than naturally there. I mention this because your work is usually so perfect that is surprising to see any flaw.

@Harry: Thank you for your detailed observation. It shows that someone is paying attention to every detail :-) I am not too worried about it. I have re-studied the master file at home and I believe it is just the outline of the next layer of clouds reflected in the water that is emphasised in the low resolution image presented here. It has been sharpened for the web and you are right in saying that it is likely a result of that sharpening.

Beautiful image. It looks as if part of the sky has settled down on the earth for a rest. The rocks on the left side look puffy, like they could be soft. Stunning shot.

I don't know why but this image reminds me of a giant seal!