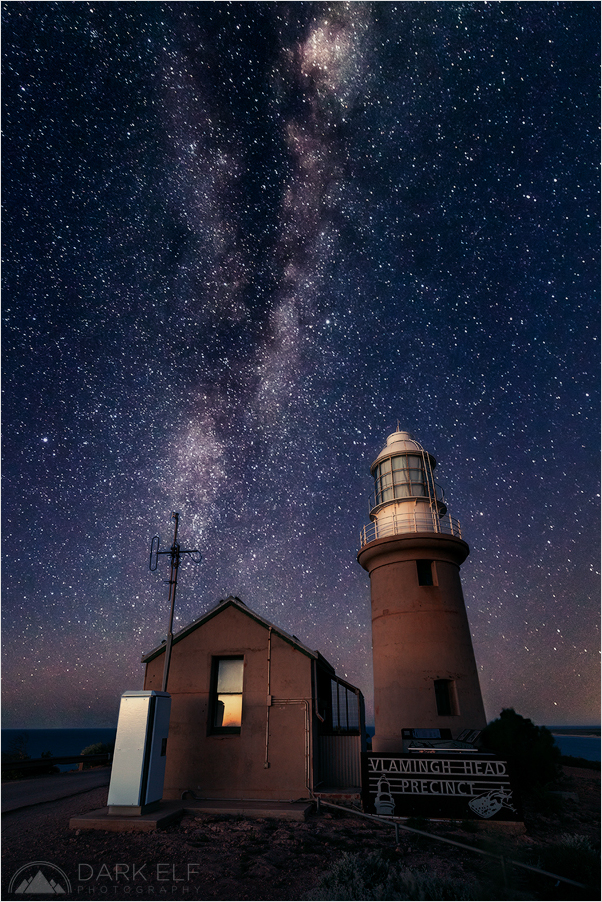 Posted by Darkelf Photography (Perth, Australia) on 3 June 2019 in Landscape & Rural and Portfolio.

Vlamingh Head Lighthouse in Exmouth, Western Australia, under millions of stars on a warm spring evening in 2018. We had very much cloudless days and nights when we went for a shot trip up there in September and therefore on the last evening I decided to give some astrophotography a go. It is a genre that I struggle to come to terms with and I probably do not shoot night scenes as often as I should.

This is a blend of two exposures - one for the night sky and one taken a little earlier for the lighthouse. Putting them together in post processing and unifying them to create one scene was a big challenge. A number of times I started from scratch when I became unhappy with the progress of the image. The toughest part was matching the tonality and blending in the starry sky around the fine detail of the the upper parts of the lighthouse and the antenna. There was no real possibility of using luminosity masks to automate the process so I did it by manually brushing in the lower part of scene. When it came to the small detail, I had to brush the sky in and out several times to ensure that it looked seamless enough.

Luckily for astro work the location was perfect. There was very little light pollution and I was able to get good contrast in my sky exposure with stars clearly visible. Usually a f/2.8 lens or brighter is recommended for this style of photography so that you can use the lowest ISO possible and shortest shutter speed to avoid star movement (unless shooting star trails) but all I had was f/4 lens so I used that one at 16mm and hoped that I would be able to get a good result. The foreground was shot at ISO 400 and the sky at ISO 3200, both at f/4 and focused manually at the start of the evening to ensure that I had exactly the same scene to blend together at home.

I hope you like the final result. It certainly represents my impression of that evening when it was magical to look up at the sky and see the Milky Way appear slowly overhead after sunset. Since then I have purchased f/2.8 lens, which I hope to put to good use in the second half of this year, especially in Iceland, where I will be looking for an opportunity to photograph the northern lights in late September.

The magic of the Milky Way beautifully captured

How you did the editing of 2 pictures to 1 is a great job for me. Beautifully done. Bravo 5*

A great sky over this lighthouse. Nicely Done.

Really a magic moment ! a fabulous result of your editing work !

The tonality matches very well in the final result! And the details of the Milky Way are beautiful.

A magnificent image. I don't see how it could be any better. Excellent work all around.

Congratulations on Spotlight, too :)

Splendid composition and excellent work, it is an image of all beauty! I like it very much! Congratulations on the Spotlight!

Absolutely wonderful!
I have thousands of stars in my eyes

@Gary Hart: Many thanks Gary!

Most star shots do not have such an interesting foreground. Great image.