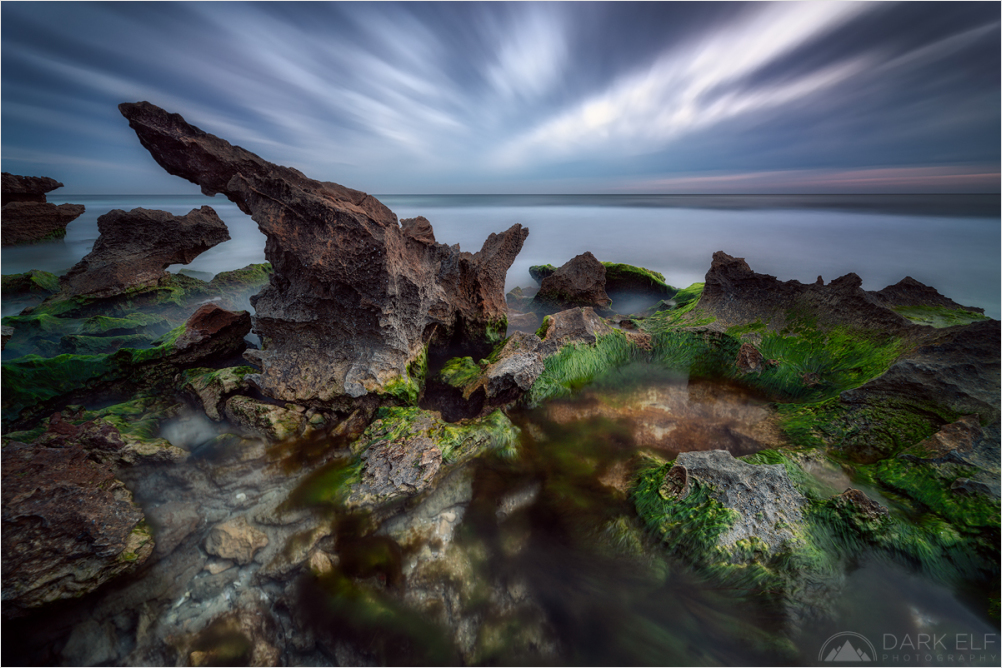 A photo hot off the memory card, taken just a couple of days ago. I finally found a moment to head out to local beaches in search of a new composition. I was hoping to take advantage of moody conditions that were preceding first serious rain of the winter season. I also wanted to test out a new 14-24mm f/2.8 lens that I hope to use for some northern lights photography later this year. I just got a basic set of filters for it as well so it was a good opportunity to see how it goes in the field to have an idea of what compositional challenges might await me in the future. It is only 2mm wider than my 16-35mm f/4 lens but already that makes such a big difference.

I went to a spot that I knew but never explored a bit further and was pleasantly surprised to find quite a fantastic and alien look section of the shore. I actually focused on a completely different composition first but decided that it did not work and got my feet wet to venture out a little to see what was around the rocks that I was originally photographing. This is was the scene that I found.

Alien eroded rocks pointing in every direction combined with surreal looking fresh green moss that signals the arrival of the cold season. I found the cloud alignment to fit this scene much more than the previous one I was shooting as well. Swell was very low and there was only the odd wave penetrating the rocky foreground so any ideas for a dynamic seascape were quickly abandoned. Instead I went with a long exposure of six minutes to get maximum ethereal effect out of this place.

The result is the Theory of Chaos that you can see in the image. A somewhat busy but hopefully engaging and mysterious scene. I liked how there was just enough motion blur in the foreground water to soften some of the detail in the bottom. I feel that if there was sharpness all across the frame, it would really all become just an overload of detail and it would take away attention from the main rocks and moss in the mid layer of the frame.

One of the reasons that I love landscape and seascape photography so much is that hardly ever the conditions are exactly the same and no matter how many times I have been to a particular location, I always find something new and interesting. Today's photo is a great example of that.

This "chaos" is really wonderful!

A very nice result. I like the color on the rocks and moss.

Superb documentation!
Really enjoying your blog when I get time to read it!
Learning vicariously from your photographs and settings also ... thanks!

This is a spectacular image! I love the colors and the shapes of the rocks. It is quite open to interpretation but alien is a good one. The sky and the water with the long exposure creates the perfect background. 5*