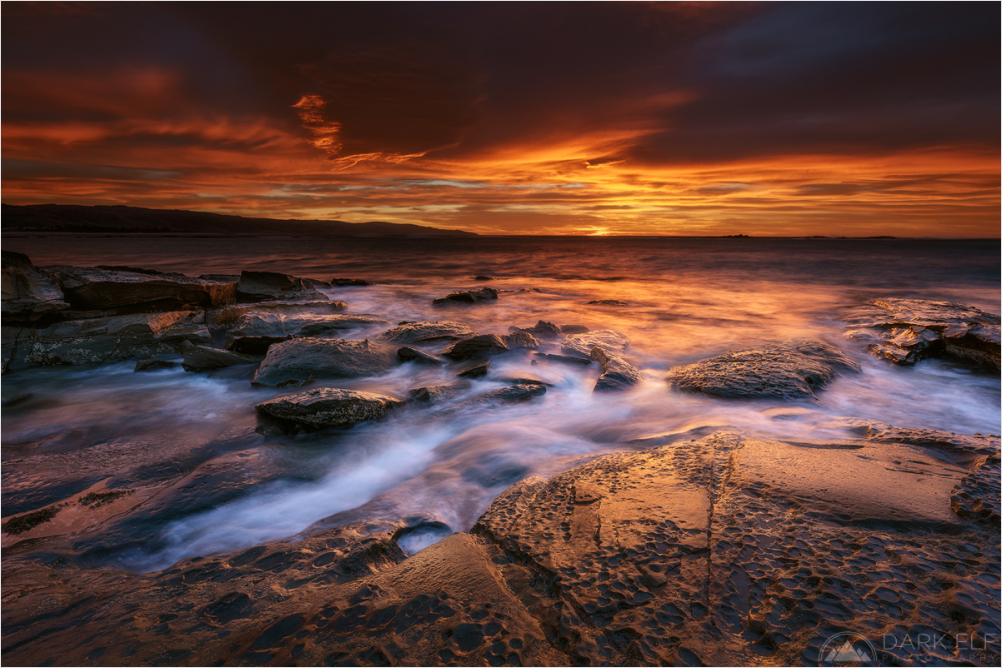 Out of The Dark

Vivid and colourful morning in Apollo Bay on the Great Ocean Road in Victoria. I took a number of (in my opinion) good photos that day and I am just slowly spacing their release around. While the sky remained almost uniformly brilliant throughout the morning, there were just so many interesting shore elements to photograph in the foreground to make each photo substantially different from the others.

This scene attracted me because of the silky water movement and dynamic atmosphere in addition to the colours in the sky. The waves were breaking a fair way out from this spot and the water flow was very measured which resulted in a more dreamy look of the water. Exposure time was also long enough to take advantage of these conditions without completely removing any texture from the water.

This photo is a combination of three exposures with the base one being for the water and reflections in the sea to get the best balance of water motion and properly exposed tones. I used a different exposure to keep control of the highlights in the sky and used another one to bring back some detail in the shadows, especially in the rocks on the left. Even with filters it is sometimes impossible to capture the required dynamic range in certain situations. It is customary for me now to shoot at least three exposures to ensure that I have all the information required to develop the image that I envision.

This scene at that moment of the morning was particularly difficult to master. I was using a four stop reverse graduated filter but the exposure difference between shadow and highlights was still too big and I had to take five different shots to cover the entire dynamic range. An added advantage of this is that you can then also review where the water motion looks best and possibly pick that exposure as your base, which is what I did in this case.

Beautiful capture of this special moment ! superb light and colors !

Excellent result with this superb image.

And into the light ... Awesome colors! Beautiful textures in the lower part ...

A stunning image. The colors are just spectacular. The textures in the rocks and the long exposure makes the water so magical. Absolutely beautiful! 5*

wonderful colors and tones; a beautiful place nicely framed and exposed (and processed).

@Harry: Thank you very much Harry :-)

I never get tired of looking at this wonderful photo...