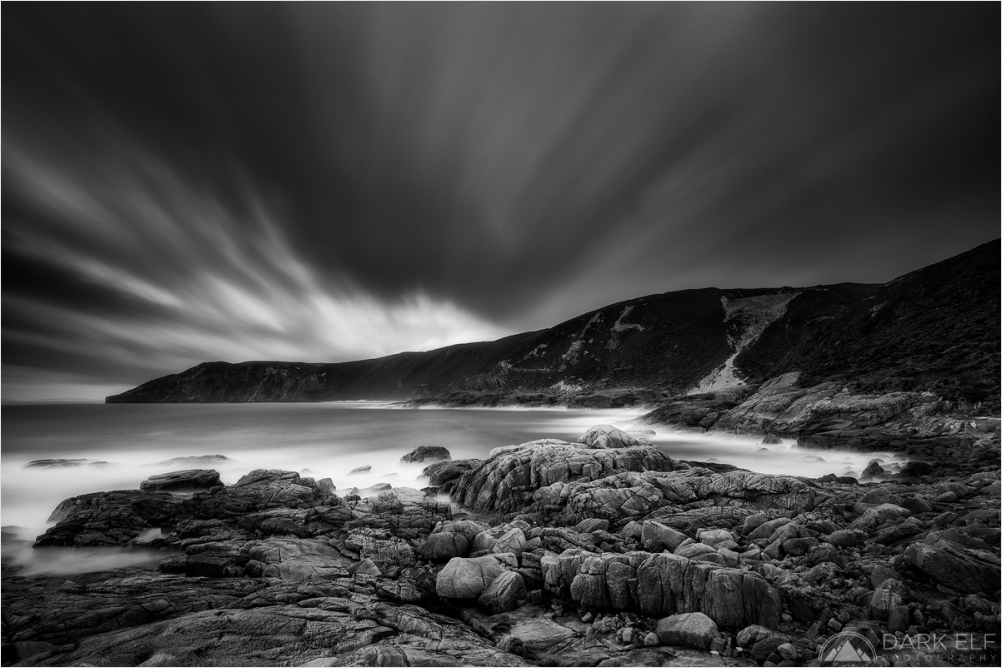 Long exposure from the rugged coastline of Torndirrup National Park near Albany in Western Australia. Fast moving clouds prompted me to bring out a six stop neutral density filter and run the exposure up to four minutes to get the most of that motion in the sky. I also liked the fractured, rocky foreground that had so much detail in it. It fitted with the overall dark mood that I was going for.

I took some photo around sunset earlier in the evening and as I was taking them, I kept an eye out for possible long exposure compositions. I wanted to give clouds enough space in the frame to have a strong effect of motions, while also having plenty of interest in the foreground. What attracted me to this composition, aside from the rocky foreground, were the different layers that were present throughout the scene. The smooth sea added good separation between the closest rocks and the dark headland in mid-frame. The headland anchors the clouds for me and has just enough detail in it to have interest but not too much to take away attention from the clouds and foreground.

The photo has good detail, you hit upon a good exposure time and in my opinion the zoom effect of the sky really makes this photo.

@Jerry: Many thanks Jerry

This is so beautiful.

A superb long exposure and great dramatic atmosphere in BW !

I really like the documentation! Perhaps I need to take a photographic holiday in Australia?

@: Helen :: Thank you Helen :-) Our beautiful country has so much to offer. As much as I love travelling overseas, I just as much enjoy discovering our own backyard.

The sky makes this a great image.

A gorgeous B&W image of the coast. The sky is amazing as are the rocks in the foreground.

@Harry: Many thanks Harry!

Beautiful tones and textures, the slow shutter speed really brings a wonderful feel to the sky. Nice in B&W. I really do need to force myself to use my tripod more!

@Maureen: Thank you very much Maureen!

Oh I LOVE this one, Maciek!! It's like traveling through a Time Warp!!! Just a fabulous piece, here, sir....
I Just LOVE your work!

@Denny Jump: Thank you Dennis! Great to see you back on board :-)

Wonderful shot. It almost feel like you zoomed as you shot, creating the radiating effect, especially in the sky. Great work.