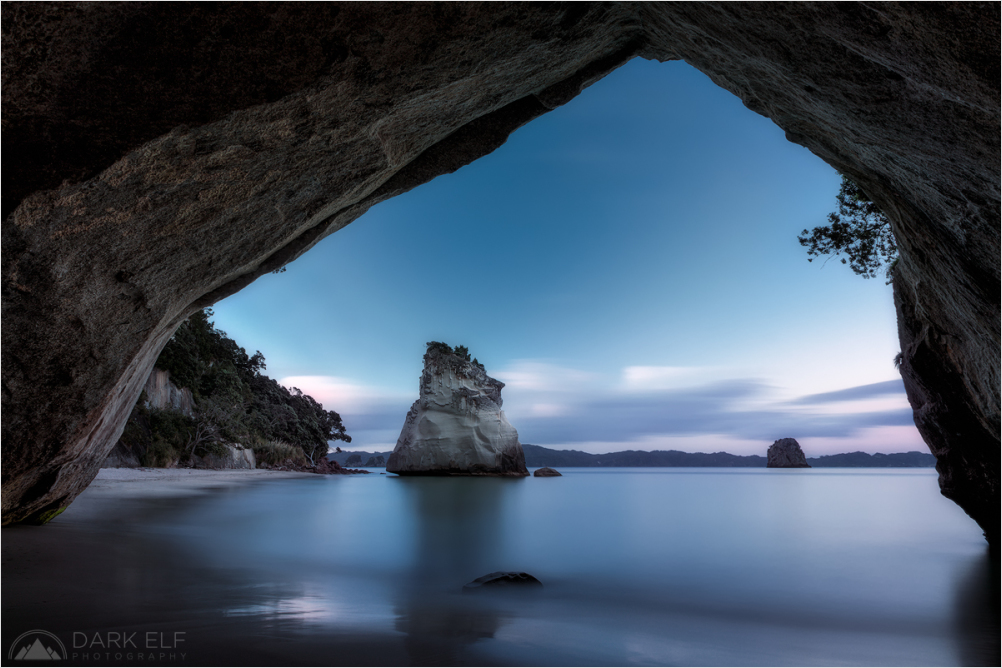 Another long exposure but a slightly different kind of mood for today's post. This photo comes from the Cathedral Cove on Coromandel Peninsula on the north island of New Zealand. It is a beautiful spot away from major civilisation. I was actually inside the "cathedral" when I was taking this shot looking out towards a sea stack just off the shore. I did not get any great photos of the cathedral itself so I stayed a bit longer into the blue hour to photograph from inside the large opening in the rocky coast.

In this photo I wanted to emphasise the smooth calming blue tones of the early blue hour. No colours eventuated from the sunset so I disposed quickly of any other ideas I might have had and concentrated on getting all the frames to put this image together. It was impossible to get all the dynamic range in one frame so I shot one exposure for the landscape and another couple for the inside of the cave. The rock ceiling was much darker and while retaining some detail I did not want to stray too much from that tonal difference, However, I did not want a silhouetted outline either. I hope the tonal balance worked out well in the end.

The smooth blue water worked in unison with the blue sky, while the sea stack, beach and clouds provided mid-ground interest to take the attention outside the cathedral. I liked how the long exposure soaked up the gentle blue colours that were just becoming visible not too long after the sun disappeared. I played with a black and white version of this scene for a moment but in the end I felt that the blue mood just worked a lot better for the image and my vision for it.

I was hoping to return to this location over the next two evenings when we stayed on Coromandel. That was not to be, however, as we had a tsunami alert overnight, because of an earthquake on the south island, and we were told to avoid low ground over the next two days. We would definitely like to visit the area again in the future. It is another amazing location that New Zealand has to offer in its rich landscape repertoire.

Excellent framing from this beautiful place ! superb colors of the blue hour and rendering of the smooth long exposure !

Stun-ning!!! So well framed and such a magical seascape!!

Such a calm and gorgeous image. It's a masterful presentation of the beauty of this place.

Fascinating seascape. The point of view and framing could not be more perfect. The long exposure really worked it's magic.

This is gorgeous! The sea stack is beautifully framed. The long exposure creates a magical atmosphere with the blue water and sky. A magnificent image. 5*

You got wonderful tones to the picture from that iconic place, with the textures of the rocks.

Beautiful soft lighting. I love the overall mood and the composition.

Lovely color and a bit of a dreamy Paradise , nice framing

@Maureen: Many thanks Maureen

The framing is perfect... it kind of protects the beauty!