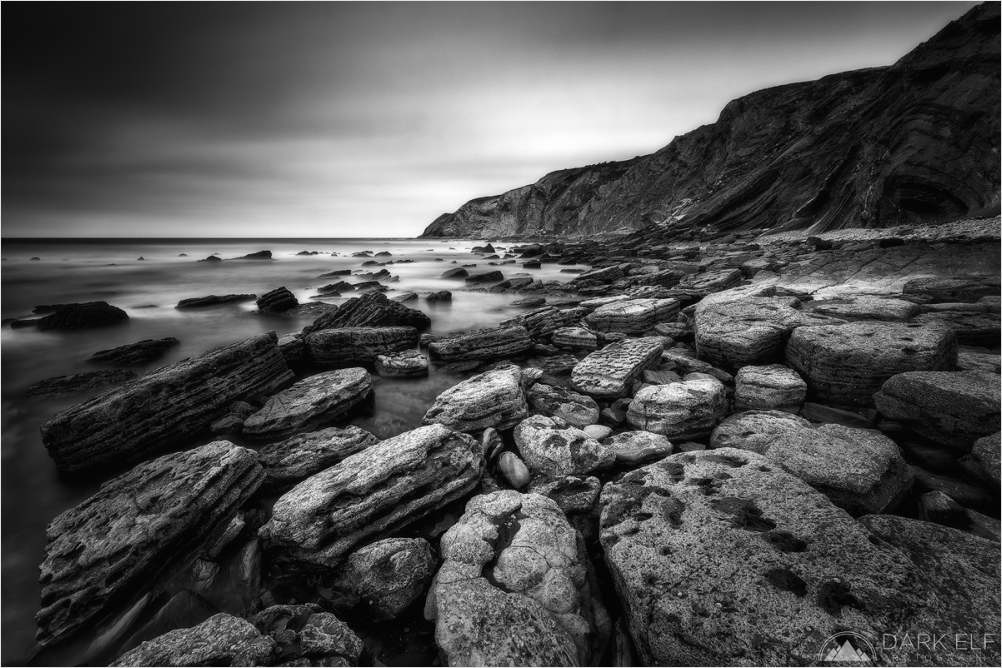 Northern coast of Spain, from the Basque region, through Cantabria and ending in Asturias, has been on my mind for a long time and it was great that were able to travel there last year. Coast unlike any I have seen so far with big cliffs, many different rock formations, jagged shores and beautiful beaches. So familiar in principle to an Australian and yet so very different to the coastlines that I have seen at home. One of the things I did not know was that to access most beaches one had to climb down good 20-30 metres via steep steps to get to the shore. "Hard work", especially when going out for sunrise, but the views and the coast itself more than made up for that "effort" ;-)

When we went to Barrika Beach, near Bilbao, for the first time, we were greeted by gloomy conditions and overcast day. The tide was at its low point and I was able see the broken rocky shore stretch out before my eyes. It was interesting to see how sea and wind erosion had shaped this coastline. The were rocks scattered all around with many placed in different directions and at different angles. There were wavy lines and ridges leading all the way out to see (these will be more prominent if photos from Liencres that I will post later). I was immediately taken in by the shapes and textures around me. Once I walked over the rocks out a little bit, I was surrounded by this "broken realm" and no matter which was I looked, there was something interesting to see.

I took a number of long exposures and this was mainly because the clouds did not have that much definition to them to have an impact during shorter shutter speeds. Also, the water movement was not that exciting close up with low tide and small swell keeping the action and drama to minimum. Going for longer exposures allowed me to work the mood of the moment a little better. In my opinion, clouds and water look better in this dreamy/misty effect than they did otherwise. This further allowed me to concentrate on the detail provided by the stones and rocks. The main interest in this scene was definitely created by the rock textures and the mosaic formed by various boulders.

This photo did not require much processing work. Conversion to black and white and then mostly dodging and burning to work on the balance of light in the scene. I wanted the eyes to catch the interest in the foreground before working their way through towards the misty water and ending on the high cliff in the distance. For me the end result is this timeless strange landscape, ancient and brooding coastline that seems almost raw and untouched by civilisation.

I love this coast with special rocks formation ! superb chaos of rocks in the foreground, beautiful long exposure and BW !

A superb composition in a long exposure and BW! I really like the framing with the rocks in the foreground!

An excellent moody look at this bit of coastline. We have travelled along it and also in to the Picos but not spent enough time there to explore it properly so I look forward to this series with interest

@grouser: Thanks Grouser. We could not make it to Picos unfortunately so we stayed along the coast line most of the time.

A gorgeous view of the rocky coastline and the water. Beautiful light. The black and white is incredible. 5*

well worked B&amp;W - the foreground is spectacular and it leads perfectly

Plenty of beautiful rocks here on that coastal line.

A magnificent image! The long exposure and B&W treatment are perfect. I can almost feel the textures in the rocks up close.

Amazing texture and detail on the rocks. Beautiful B&W.

Amazing tones and textures in this image packed with fascinating details.

Love this monochromatic conversion. The contrast and textures really stand out!
A very strong composition