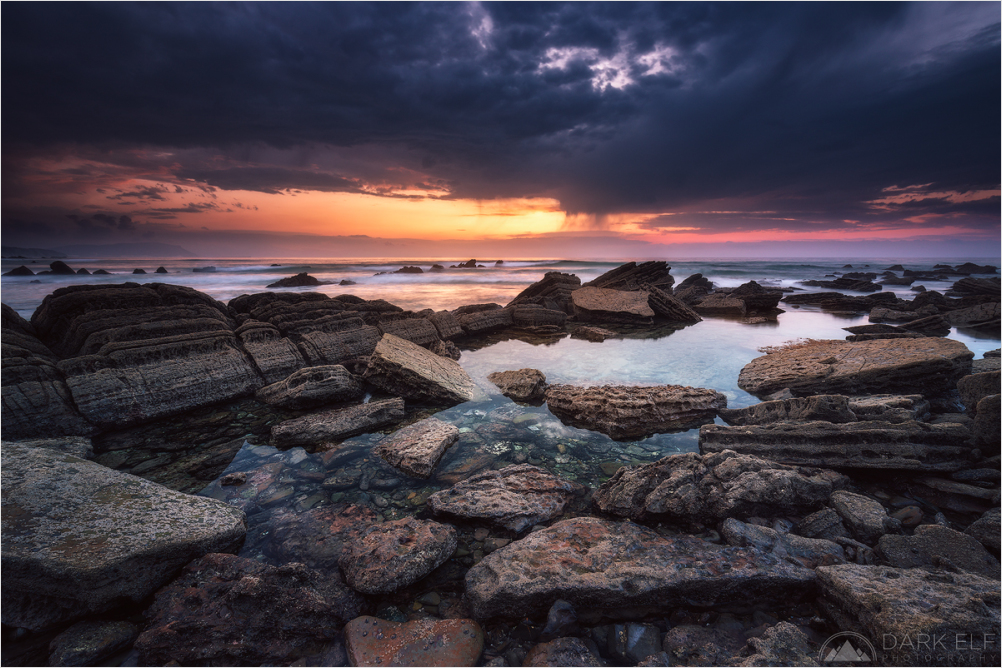 Secrets of The Sea

Posted by Darkelf Photography (Perth, Australia) on 23 April 2020 in Landscape & Rural and Portfolio.

What a difference a day makes. This is Barrika at sunset a day after previous photo was taken. Low gloomy clouds have moved away and they were replaced by more dramatic stormy clouds with many breaks in between. That resulted in a beautiful colourful sunset that combined nicely with the rugged shores. There was threat of rain and thunder around but I managed to get some photos before darkness and rain came and we had to pack up and withdraw back to our vehicle.

It was a "run and shoot" kind of situation because we got just a little bit later than expected. Having been there a day earlier helped a lot because at least I knew where some interesting composition were and I went straight to those spots. However, this is a location where you could find a decent composition almost everywhere. The main factors affecting compositional choices were the weather, the tide and level of water.

That evening the water level was a touch higher than the day before and it filled the space between rocks to break them up a bit further and to give a respite from the endless flurry of detail surrounding me. The water was still low enough not to be impacted by the waves, which allowed a glimpse of the detail and textures on the bottom to come through. I used the polarising filter to remove reflections in the foreground pool but dialled it so that the scene retained a lovely glow and reflection in the pool closer to the horizon.

Dodging and burning has definitely become my main post processing technique. Indeed this was the bulk of my processing on this photo. I used it to re-shape slightly the flow or the path of light through the scene. I did not want the overly bright rocks in the foreground to steal the attention away from the water pools and rocks immediately next to them. Sometimes it takes a lot of work, sometimes just a few gentle brushes but I have noticed that it makes a huge difference to most of my photos and the mood that I want to portray.

Barrika was a great introduction to the northern coast of Spain. The scenery was fantastic all along the coast from San Sebastian to Bilbao. The hardest decision was not what to see but what not to see and what not to photograph. We spent three days in this area before moving on and it was nowhere near enough. Hopefully one day when the world settles down a bit, we will be able to go there again.

Beautiful light you had here this evening, indeed!

Wonderful moods in this seascape.

The lighting is very beautiful.

@grouser: Thanks, as always, Grouser :-)

such beautiful composition, clouds, colors & lights!
A M A Z I N G !

A gorgeous sky complemented by the eye-catching foreground!!

A magnificent composition. I love the rocks in the foreground and the dramatic sky!

Amazing light coming through the clouds. I enjoy the pools of water and the rocks in the foreground.

@Stu: Cheers Stu :-) I was so looking forward to be in Japan next autumn but this is not very likely to happen now...

What a beautiful and peaceful landscape! The hues and the light are superb! A great achievement!

... and what a piece of great news to have your photos bigger here :)

@Vaido: :-) After so many years posting here, I decided to give it a go. I considered it many times before, as I found the basic photo quality staring to lack a little compared to other sites where I post. I looked through previous photos and even at 1200px resolution the different in quality is immense. This is especially true for photos with high texture/detail and lots of shadow areas.

Rain is coming ...
Awesome colors and landscape! The water is so clear!

Amazing depth, colour and clarity. The gradation of the warm orange is prefect.