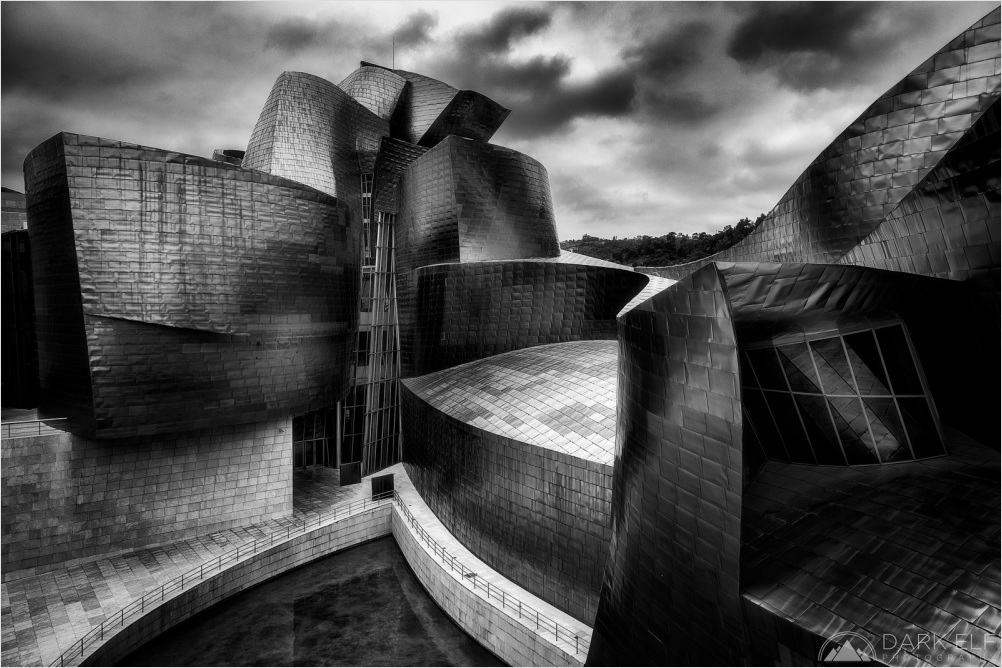 Posted by Darkelf Photography (Perth, Australia) on 30 April 2020 in Architecture and Portfolio.

Bilbao in Spain is fascinating for many reasons - Basque history and culture, food, Old Town amongst others. However, it also has one of the marvels of modern architecture, the Guggenheim Museum, gallery of modern and contemporary art designed by architect Frank Gehry. The architecture of this building is out of this world. It seems almost organic and fluid in nature. It is very similar to the Walt Disney Concert Hall in Los Angeles, designed by the same architect, that I saw previously on various photographs.

The museum looks different form every angle and it changes in appearance with every single change of perspective. It is not just the angle that changes, the building really transforms before your eyes and no doubt its design has a lot to do with that perception. It is one giant random generator of shapes and textures. Light conditions affect its exterior as well and I can imagine it appears different at during various times of the day. One would almost think that this style of architecture would be out of place in a city and especially in a city with a long history but it just works. You notice it, it is impressive and asking for attention but it does not look like it does not belong. It is seamlessly embedded into its surroundings.

The view from the riverside is the one that is most well known and photographed, however, I am glad that we walked around and found this spot at the back. While the waterfront and the area around main entrance were busy and full of people, this section was very quiet with hardly anyone venturing this way. That allowed me to frame few compositions without any distractions in the scene.

Overcast weather conditions pushed my vision towards black and white because the rich golden tone of the exterior was very muted without sunshine (it is clad in titanium plates that look like scales, which further entrances the organic appearance). Most of my post processing for this images was done through work on contrast and dodging and burning. I wanted an atmosphere that would fit the futuristic mood of this building and I focused on various shapes and details of the museum to enhance the feeling of depth and dimension that I was able to see and feel in front of me when we were there.

You know that I love landscapes and seascapes the most, however, I do like a good piece of architecture and a good cityscape too, especially when I get a chance to photograph them. I did not get quite enough time to spend photographing this building as much as would have liked. There is only so much you can do at each location in a limited time frame and it was the coastal scenery that had most of our attention. I am glad, though, that I was able to study this magnificent structure with my own eyes and that I managed to take a few photos in between as well.

A wonderful framing and BW processing ! I was so happy to see this famous building ! I took a lot of photos at different hours of the day, and by night too ! on all sides of the building ! the color change at every moment and I love the rendering in BW.

Excellent choice of viewpoint to capture Gehry's interlocking curvaceous cubist shapes. The B/W concentrates the eye nicely on the forms and their finish too.

@grouser: Thank you Grouser. Glad you like this interpretation.

beautiful composition of this wonderful architecture

What an excellent capture of this famous museum, the BW is superb and brings out its magnificent architecture! A great achievement!

@mo.langel: Thank you Monique! it is such a unique building indeed.

Beautiful work with all those gray shades and composition for that geometry.

@Vaido: Thanks Vaido. Hope you like it in larger format ;-)

Wow..very complex and very well captured by you!

@Paleblue Photography: Thank you very much.

Gorgeous tones and eye-catching forms captured in this beautiful building! It appears so surreal. 5*****

A stunning image. It doesn't even look real but more like a painting! I have seen pictures of it before but I believe that taking the photo on an overcast day really accentuates the lines and shapes. It is totally amazing! 5*

@Elaine Hancock: Thank you so much Elaine! Very glad you like this photo :-)

An amazing study in tones and textures. I think you nailed the light and dark areas beautifully. A delightful image.

@Steve Rice: Cheers Steve! i did some careful dodging and burning work on this one.

your shot is very geometric and absolutely superb (thank the architect anyway ...: D)