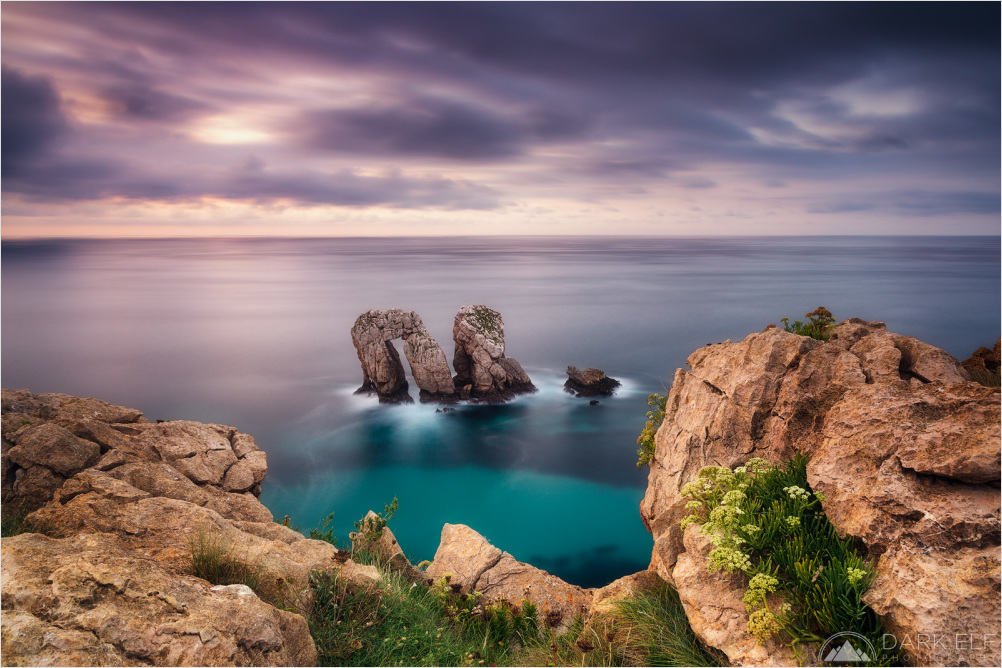 Posted by Darkelf Photography (Perth, Australia) on 12 May 2020 in Landscape & Rural.

These rocks are well known to photographers who traversed the north coast of Cantabria in Spain. They are called Urro del Manzano and they were my main reason to stop near Liencres. This is the evening prior to the sunrise photo from Arnia that I posted recently. This bit of coastline consists of many interesting rock formations, rugged cliffs and they are all within short distance of each other. After scouting areas around Arnia and also further beyond to the west, we returned to this spot before sunset, hoping for some evening colours and light. Clouds were quite promising but right at sunset a band appeared just over horizon, which meant that only a faint glow of sunset colour remained in the scene. It provided a lovely break from otherwise cold evening tones and cast enough light on the foreground rocks to give them a touch of warmth.

There are few different compositions possible at this location. I could isolate the rocks by themselves or I could use various foregrounds provided by the cliffs. If there was a bit more side light I would have moved a bit further to the left to photograph more of the rock face facing the sunset. In the end I settled for this composition because I liked the foreground elements that it provided and also the natural framing of the sea stacks. The various rocky outcrops point towards the stacks from different angles and I think it helped to focus the attention on the main feature.

In terms of exposure, I knew that I wanted to shoot a long exposure and the conditions that we encountered allowed me to follow this idea through. This is also where I further confirmed my composition choice. The water movement around the stacks was minimal and I just did not feel that it justified photographing the rocks on their own. Here the long exposure created just enough of streaks that linked the foreground to the stacks and also created a dreamy background of smooth water and soft clouds. The resulting peaceful and tranquil mood was exactly what I hoped for. There are different emotions that one feels in moments like this from the basic joy of just being out there to see and photograph new places to more profound feelings of peace and serenity that such landscapes can evoke.

One thing that can easily be forgotten when one is out photographing the world and that is to enjoy the moment and take the time to actually see and feel the world that surrounds us. When I take photos, I stop every now and again just to look beyond the scene in front of me. I often find it a surreal experience to comprehend that I am actually there and that I am seeing the beauty of nature with my own eyes. When I return home, I want my photos to reflect that feeling when I look at them later on. I want to bring back the memory of these moments and to feel like I am back there again. This photo definitely takes me back to that evening at Urro del Manzano and I get exactly the same goose bumps looking at it now as I did when I was there in person last year. I hope these feeling transcend through to you as well.

@Shaun: Cheers Shaun! I appreciate the sentiment but there are a lot of other magnificent photos too :-)

The long exposure works really well here, giving a magical presence to these megalith like rock pillars. A lovely landscape image.
I also like the philosophy behind your image and the scene it is set in. Many years ago I worked in photography and I found myself viewing the world entirely from the viewpoint of whether it would make a good image or not. This made me give up taking pictures for many years, until I could return to it without it detracting from the experience of being in and appreciating the moment first hand, rather than just through the lens.

@grouser: Many thanks Grouser. I know exactly what you mean. I have caught myself in the past trying to look at the world though a rectangle even without a camera. We first need to appreciate the beauty as it is before trying to convey it through our photos.

Now that is truly beautiful.

Tack-sharp clarity accompanied by beautiful colors in this view!

This is stunning. Beautifully composed. I like how you included the rocks and the flowers in the foreground. The different color of the water is just incredible. I like your comment about not taking the time to just take in the moment and view the scenery around you. I find that we get so caught up in trying to get the perfect image that we forget to do that. 5*

@Elaine Hancock: Thank you so much Elaine! I am glad that you share my sentiments.

Oh yes, this is wonderful! Including the foreground rocks was a very wise choice I think. The colors in the water and reflected in the water are a delight. You are an expert at your craft.

visibly and inevitably people take almost all the photograph of this place from the same point of view
Now, each of them to have their own paw (monochrome, long exposure, etc.)

@yoshimiparis: Hello! Given the alignment of the rocks it is impossible to come up with a hugely different angle unless you have a drone handy :-)

@marceline: Merci Marceline! I am glad you like long exposures as well :-)

The shades are beautiful! Very nice framing on this peaceful landscape!

Thanks to the use of a (I think) Lee filter (357 sec), a beautiful photo has been created with a brilliant depth thanks to the wonderful composition.

@Willem: Thank you Willem. This one was taken with Nisi six stop neutral density filter (plus polariser and graduate ND).

The color of the sea turns out so crazy because of the combination of the sky wit long exposure. The foreground certainly adds a feeling of the presence here.

@Vaido: Many thanks Vaido. Yes, definitely the long exposure took in all the changing light and colour to produce this result. One of the reasons why I like long exposures so much.

This is just wonderful, Maciek! Seeing your work again is like returning home after a terrible excruciating journey...Peace returns and a smile returns too....

@Denny Jump: Many thanks Dennis! You humble me greatly with you very kind words... :-)

Wonderful. Lucky to find 357 s without wind on the Atlantic shore...

@valenttin: Thank you Valenttin! Yes, it was very still, wasn't it?!

Amazing shot of a great place!

Stunning image that sets me off on travel dreams as I cancel flights and trips.