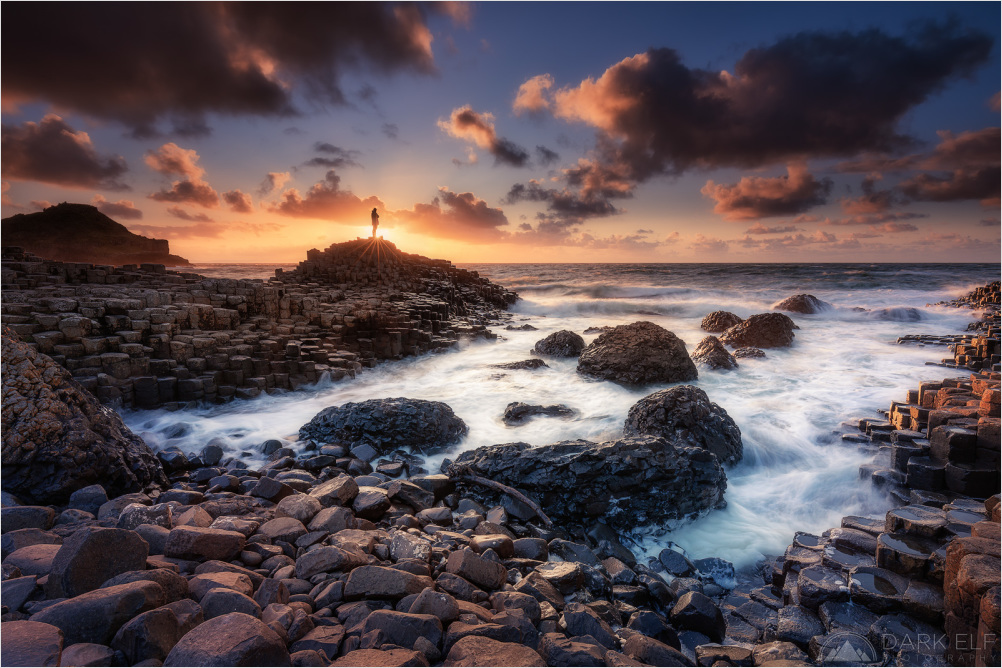 Child of The Sun

Giants Causeway in Northern Ireland is a place that has been on my list to visit for a very long time. I first heard of it when the Australian cricket team went to see it during one of the series in England in the 90's and they had a feature about it on TV. Since then, I have seen many photos that kept my interest up and finally we were able to go there ourselves in September last year. I have seen a few basalt column landscapes in the past, especially in Iceland and also here in Australia, so I was wondering whether it would still live up to my expectations and it did just that and more. Even if some places around the world share similar characteristics, each one is still its own unique location with its own atmosphere and I could definitely feel that here.

It is a popular place and because of that it is not an easy one to photograph at sunset with many people coming down to enjoy the last light of the day. I do not mind other people, we all want to see the beauty that this world has to offer, but I am not a fan of having people in my landscape photos for the simple reason that I like to photograph landscapes as they are in their natural state. There has been an increase in recent times of many photographers including a human element for scale and other reasons and I have usually stayed away from this approach.

In this case, I decided that since I cannot move the people out of the scene, I might just as well see if I can work with them. I was lucky enough for this individual to stand right on the point of one of the basalt causeways for some time in this position and I worked my composition to place the sun directly behind him. I wanted to create a silhouette of the person and also to see if I could get a star burst effect to happen. I was very happy to see that I was able to achieve that result. Even though this will not prompt me to include too many people in future work, at least I know I can get a photo with people in the frame if the conditions are right. I had the title "Child of The Sun" in my mind for some reason as well and that just fitted nicely with the vision that I had for this image.

I have actually removed some people from this scene. It was very busy with people coming and going. That spot in the sun was a particularly popular place and many people were moving around it during the evening. Since I was shooting bracketed exposures anyway to account for the high dynamic range, I took few more frames at my chosen base shutter speed to be able to pick areas free of people to make up the entire scene. Once I matched them all up in Lightroom, I was then able just to do some free hand blending in Photoshop to very quickly clean up the scene. This technique can also be used to remove flare that often accompanies shooting directly into the sun. Next, I worked with my bracketed exposures to bring back detail in the brightest parts of the photo, mainly in the water and in the sky right behind the person. From there I did some general contrast and tone adjustments with dodging and burning to complete the photo.

We were lucky to have been able to spend two evening at this wonderful location and I have some long exposure images to process from Giants Causeway to post in the future. As usual, two days is never enough to fully explore a location to find some unique compositions and this is yet another spot on the ever growing list of places to visit again (not to mention a list of places that we are yet to see). Whether we will be able to do that, only time will tell.

A truly beautiful image... five more stars for your collection!

What a wonderful job to display the magic of that location... Most certainly I remember the crowd there :)

@Vaido: Many thanks Vaido! it was much the same when I was there. I like you perspective in that photo, looking back towards the hills. I definitely wish I had more time to explore this area.

This is outstanding. TOP! 5*

Excellent work and documentation of it. Your thought and time spent here have created a beautiful image and the single figure is the icing on the cake as far as I am concerned

@grouser: Thank you Grouser! Glad you like the lone figure. I also think this time it worked very well.

Coming from Ireland I know this place well. This is a superb image. 5*

@Shaun: Many thanks Shaun! Hopefully it brings back some happy memories.

Incredible work behind the scenes to create this astonishing view!

The light falls just right on the person who has to stand still, and again a beautifully chosen composition and beautiful details.

@Willem: Thank you very much Willem!

Perfect! I can appreciate the time and effort to get something just right. This has it all. Your use of multiple photos is very skilled. The result is beautiful.

@karla: Many thanks Karla! Thanks for visiting and for your kind words.

Beautiful! I never put people in my images, but I have to admit that it definitely works here.

@Gary Hart: Thank you Gary. This was a very rare occasion when having a person in the scene worked for me. Not a path I am likely to follow though ;-)

This is gorgeous. A magnificent view and beautiful color. I don't like people in my landscape images for the most part but it is getting to be harder and harder to do these days. 5*

@Elaine Hancock: Many thanks Elaine. Indeed, we are everywhere. I think the only positive from the current situation is that the planet gets a little bit of a respite and a chance to re-generate, even if it just a small one.

this is spectacular, and I made a point to read your text. I had assumed you composited in the lone person and the star-burst. Their presence in the original scene are a testament to your skill behind the camera. Both are extraordinary element that raise the level of an already wonderful seascape.

@Harry: Thank you very much Harry for your thoughtful feedback :-)

A magnificent composition that makes me dream! Excellent work! What a great place!

an "other" wild but beautiful side of Ireland