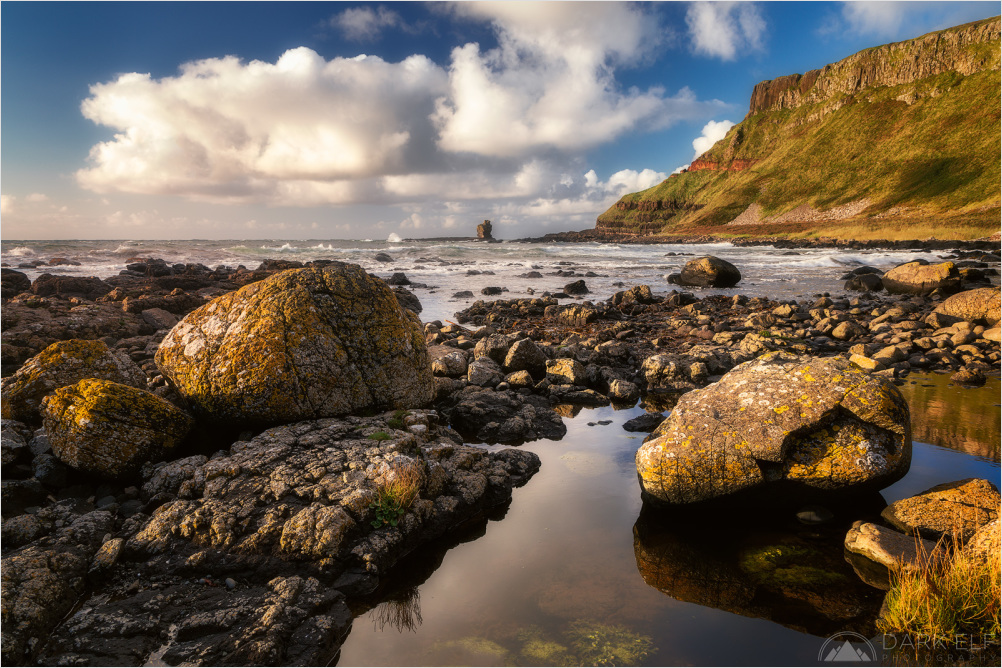 Our stopover in Northern Ireland was very brief with only two full days available to us but I am glad we had at least a little bit of time to explore the coast. There are so many beautiful places to see there and some are so close to the main tourist attractions and yet they seem like a world away from them. This location is only a few hundred meters away from the Giants Causeway and while everyone was giving their full attention to the basalt formation, hardly anyone took the time to explore a little bit further.

As we descended down form the cliff top trail we found this beautiful spot with warm late afternoon light hitting the large boulders in the foreground and the cliffs in the background. I especially liked the foreground elements here and there were plenty of boulders to choose from to include in the composition. I was also very happy to see some clouds about that added to the overall mood and filled the blue sky very nicely.

It was one of those beautiful simple scenes that did not require too much thought or effort. The aforementioned afternoon light was beautify warm and golden and illuminated the scene uniformly which meant that no additional filters were required. I only used the polariser to increase the contrast and deepen the blue and green tones in the sky and landscape. Because the light was coming from a low angle to the side, it also created additional depth by making the contrast stronger between illuminated and shadow areas.

Beautiful coast there. Wild and rough at the sea. But even nice calm water in the puddles as contrast. This warm light made this picture lovely.

A great image to admire from Ireland. 5*

A beautiful composition with rocks in the foreground and the solitary one stand in the distance ! Superb warm light and beautiful clouds that add attractiveness to the landscape !

Amazingly captured in this photo. A big wow is in place ;-)

Nicely composed with strong rich warm colour and crisp textures.
One of the things I remember about Ireland, something it has in common with the west coast of Canada is the great clarity of light there. I guess the prevailing weather coming from the west over the oceans washes the air clean as whistle :)

@grouser: Cheers Grouser. I think you may be right and I also think it has to do with cooler air as you push further north.

A splendid view from along the shoreline that you've captured here! Beautiful warm tones in the landscape that contrast well with the refreshing blue sky.

Wonderful image with such a beautiful foreground ...!

wow - another fine seascape. I cant stop looking at those foreground rocks, yet the lovely cliff and sky keep drawing me up

@Harry: Many thanks Harry

This is gorgeous. I love how you composed this image with the sweeping cliff that has beautiful color and the rock formation in the distance. The rocks in the foreground with the yellow and the reflection is beautiful. It creates such a nice contrast with the still water as compared to the breaking waves in the distance. 5*

@Elaine Hancock: Thank you very much Elaine, as always :-)

Ireland is definitely a beautiful country

Those boulders had a magnificent color and texture there, indeed - and the wall behind them was wonderful, too. I like that low point of view which emphasizes these boulders well.
So I searched a shot from there for tomorrow, too :)

@Vaido: Thanks Vaido. I look forward to seeing the photo!

A superb composition with a wonderful light that brings out the warm colours!

The clarity and low position make this photo a winner.