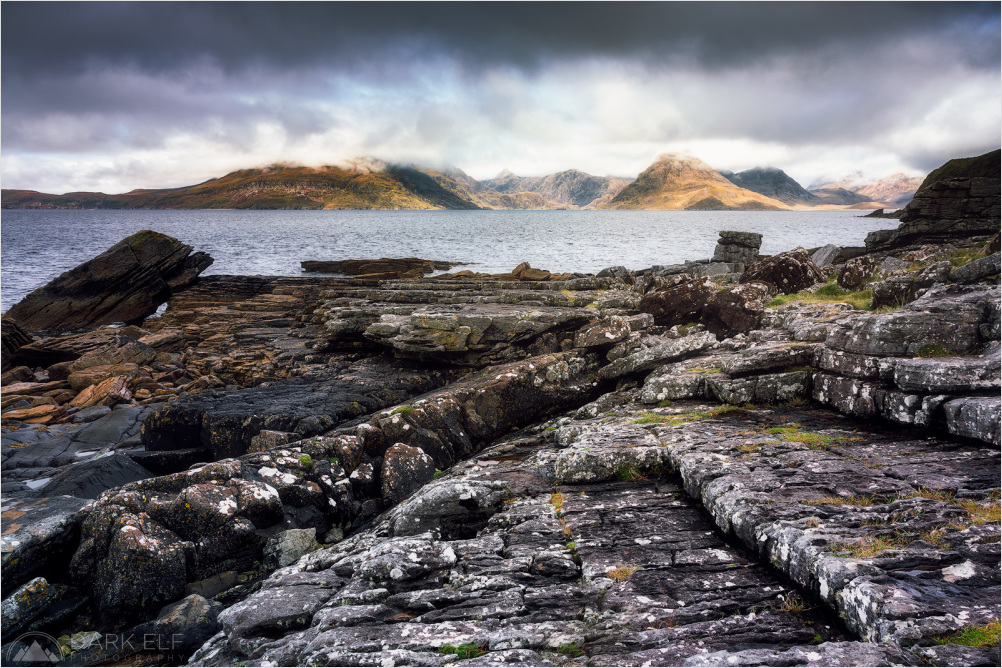 Moving onto Scotland for a photo or two. Unfortunately, I had limited opportunities to take some, let's call them "more artistic" photos during that part of our journey. We treated this visit as more of a scouting trip with a view to hopefully return one day for a little bit longer. In many places the weather did not always cooperate and we were travelling in a group, which meant that I was not as free as I would have liked to give proper attention to photography. This has impacted particularly strongly because we were exploring new horizons and we placed more emphasis on the exploring part. But enough with excuses, I just set high standards for myself and ultimately, I think I failed to take the photos I was hoping to in the Scottish highlands. It was still great to see the highlands thought and the glimpses of beauty that we saw have definitely left use wanting to come back one day.

Today's photo comes from Elgol Beach on the Isle of Skye. It was one of the rare moments where I was able to walk around with photography in mind and had time to really take in and breath the landscape around me. I was immediately taken by the textured shore that you can see in the foreground. It was the middle of the day but the passing rainy clouds hovered nicely over the mountains on the other side of the bay and the sun managed to find its way through to shine beautiful light that created great dimension in the background. That helped to give the scene a bit of drama and atmosphere.

As is often the case in cloudy conditions, I considered a black and white option but the colour and light in the mountains made me stick with this version of the photo. The contrast between the sculpted rugged shore and the lusher looking background captivated me as well. I also like the mountains disappearing from view behind the rocks, which makes me think of what might be discovered if one was to follow the shore around the dark rocks to the right. Hopefully, we will be able to return and do that one day because I really liked what we saw of this area.

Very nice picture. Good composed. Sky is a wonderful island. The weather canges often there and travelling in groups isn't perfect for good daytimed photos. I'd the same problem, if I was there. You're result here is very well.

Excellent look at the Isle of Skye. There are many little Islands off the Scottish coast.

@Shaun: Many thanks Shaun. Yes, there are! I hope to return there one day.

A beautiful composition between the rough foreground of the rocks and the softness of the background ! I hope you can one day return to this beautiful island alone, to remake more beautiful pictures as you want !

That looks like limestone pavement to me and you have captured it beautifully. The backdrop of the lowering cloud and the light on the mountains below it is excellent too. A lovely detailed textural landscape

Great contrast between the sky, sea and the rocks... nice one.

A beautiful image. The rocks in the foreground are really interesting. I like the formations and the textures. The view in the distance is lovely with the sun shining on the mountains. A fabulous sky! 5*

@Harry: Thank you Harry! Always appreciate your comments and visits :-)

Given the many constraints you spoke of, you've come away with a beautiful view captured here! Here's to next time after scouting the region.

@Steven: Thank you very much Steven

A magnificent composition that makes us feel the atmosphere of a Scottish landscape! I like it very much!

The light on the mountains back there is beautiful... As well as the rocky texture in the front.

A good choice to present this photo in color. Indeed the weather is not always beautiful in Scotland.
Nevertheless, the Scottish climate has produced a beautiful picture with the clouds over the mountain tops.

this landscape is fantastic, both literally and figuratively
Your photograph brings her a little bit of mystery

Beautiful series! The skies seem to enhance the earth and vise versa.