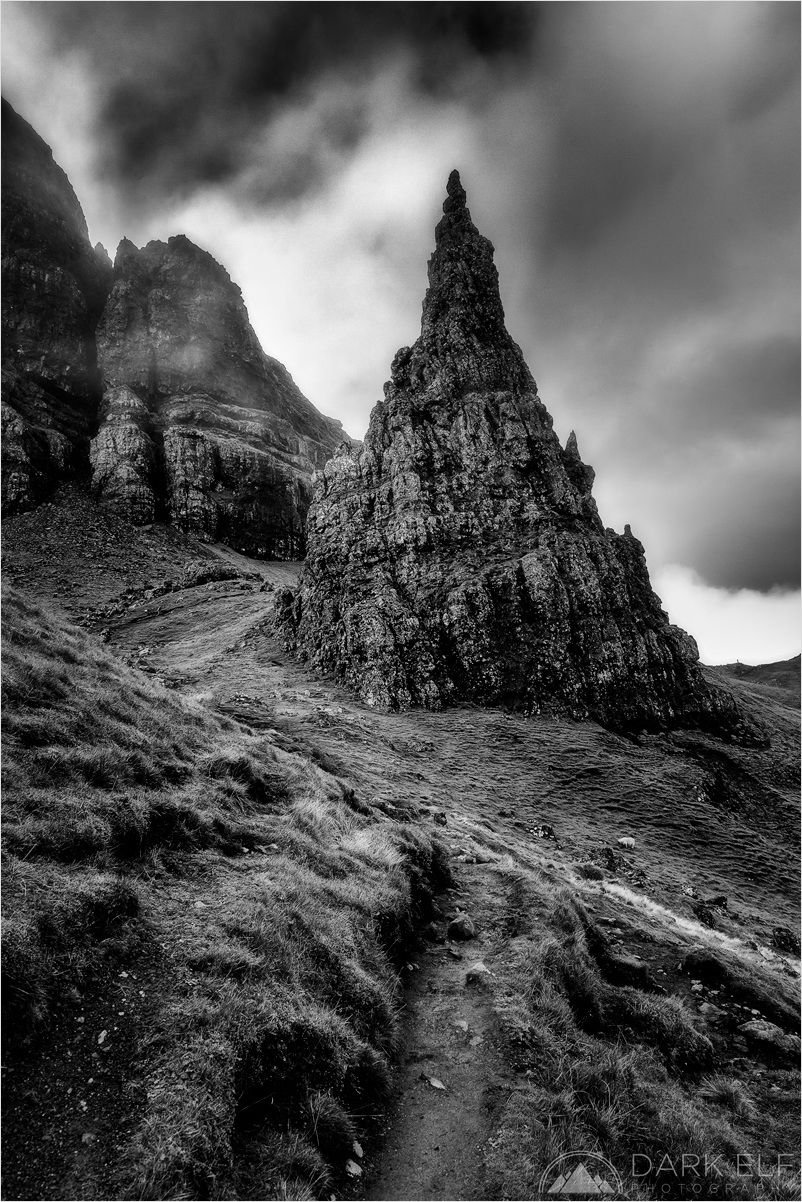 Isle of Skye in Scotland abounds in iconic and beautiful locations. Old Man of Storr is one such place and it was a must on out list when we visited. As I mentioned previously, one cannot pick his weather and so it happened that the day we went up there, the weather was very mixed to say the least. Early on, it did not look we were going to make it at all. The higher parts of the Isle were all covered by clouds with almost zero visibility. By the time we arrived at the car park, the clouds lifted a little and we braved the blustery conditions to climb the slippery track to the foot of the Old Man of Storr. It was very cold in windy conditions but luckily we were prepared clothes wise. As soon as we were half way up, we also managed the wind behind with conditions suddenly becoming very calm and enjoyable for the rest of the way.

We could not get to the spot with the iconic view of the Old Man but we were able to walk around the base of these huge formations and explored the rugged area a little bit. The formation that caught most of my attention is the one in this photo called The Needle. It really is amazing and massive as we stood at the bottom and gazed up towards the sharp peak, which was appearing and disappearing as the clouds moves fast around it. These conditions were perfect for a black and white take on The Needle and this was my favourite shot of the few that I took around it. I would think that normally there would be many people admiring the rocks from up close but the weather seemed to put off most of them form climbing too high.

Similar to the previous photo from Elgol, the textures of the landscape, in addition to the sculpted cliffs, were what made this location so interesting. I keep being amazed by what nature can produce and that sensation just gets stronger with every single place that we visit. The spire looked almost like remains of some old castle created out of the rock through sorcery and magic and no doubt it has been an inspiration to many a fantasy setting in books of this genre.

For the ones of you that have attention for detail and just for fun, see if you can spot a stray sheep that ventured high up there to check if the grass really tastes better in the upper regions. It seems to me that sheep are quite adventurous animals that enjoy a hike or two. Everywhere we climbed in Scotland, Iceland, New Zealand and other places, there were always sheep, even on the highest mountains, as long as there was grass to be found. You would not see another human being for miles but there always would a white (or black) dot visible from far away.

The B&W makes the atmosphere very intriguing. I like it!

What an interesting rock! Black and white works perfectly here, for sure.

@Vaido: Many thanks Vaido. I had a dark Gothic feel in mind as I was taking the photo and processing it later.

Beautiful angle of view on this strange rock ! Excellent special atmosphere with the weather and your BW ! I can see the sheep ;-)

what a marvellous craggy rock spire and how good of the sheep to trek up there and give it scale :) The BW treatment enhances both the mood and the textures. Excellent dramatic landscape capture

@grouser: Thanks Grouser! I am quite sure the sheep later ventured further up.

Always something good to see on the Isle of Skye. Excellent capture and really good in B/W.

Such an eye-catching rock formation against a very steep grade! Your black and white processing really brings out the nice tones and textures. And the sheep help add a great sense of scale.

@Steven: Thank you Steven! Loved the location and wished the weather was little better to explore it further. Scotland is our number one location to visit as soon as it is safe to travel again.

What an interesting place! Black and white was a perfect choice for this image. It has an almost scary, ominous feel to it. I love the clouds in the background. The rock formations are amazing! 5*

@Elaine Hancock: Many thanks Elaine. The rocks and the mood were asking for a black and white treatment here.

The details are beautifully preserved and also a nice depth thanks to the low point of view.

@Willem: Many thanks Willem :-)

Thank you for all these interesting explanations about this place
I think there are places it is good to visit when the weather is overcast, which makes them even more mysterious and magnificent

I certainly see one sheep and two more I think at a greater distance. Such a magnificent formation and stunning image.

Beautiful. The Needle made me think of a temple.

@B. Thomas: Thank you Barbara. I like your analogy, it does look a bit like a temple.

I see one sheep, to the right, though it looks more like a very round white rock on little supports. This is a very rugged area! That needle is indeed fascinating. It's been shaped by wind and water, presumably. Great moody photo, angled nicely.

@karla: Thank you very much Karla