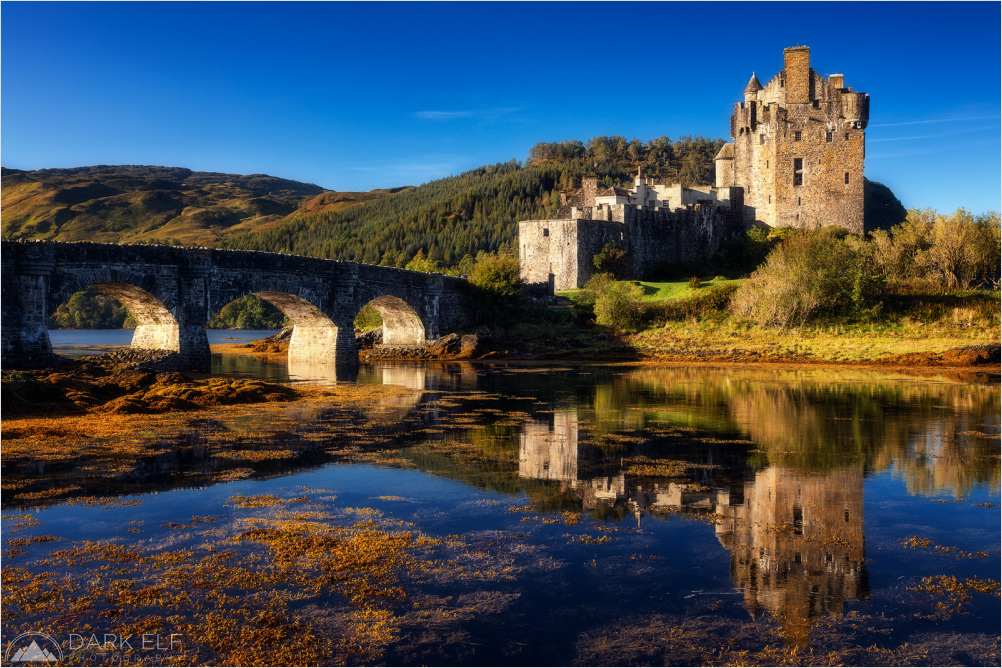 Posted by Darkelf Photography (Perth, Australia) on 27 July 2020 in Architecture.

One of the best known Scottish castles can be found on the way to the Isle of Skye and it is of course the Eilean Donan Castle. It is located on a small island where three lochs meet - Loch Duich, Loch Long and Loch Alsh. It is a very picturesque location and it has been a photographer's favourite for a long time. It has also been utilised in various movies and television. I remember it vividly from the film Highlander where it featured prominently.

We did not stop overnight near the castle and passed by it twice - once on the way to Skye and once on the way back. The two occasions provided very different photography conditions. On the way in, the weather was overcast and greyish, while on the way out, it was a beautiful crisp morning with beautiful morning sunlight illuminating the castle and bringing the colours of the surroundings to life. The tide was at about a mid point and that made for reflections to appear in the water while still allowing for interesting foreground details to be visible.

It was early autumn and you can just see some of the fall colours starting to show in the surrounding hills. It was not autumn in full swing but the moment definitely had an autumnal feel to it, especially with the cool, crisp highland air. If we were not in a hurry to a planned distillery tour that was quite a long way away, I would have definitely loved to stay there a little longer on that morning.

In terms of the photo itself, it was very straight forward. Hand held with just the polarising filter added to brings out saturation and contrast in the scene. I did not dial it all the way in because I wanted to retain some reflection of the castle in the water. It was very quiet at that time of the day so there was no issue with visitors running around and having to clone them out later. In post processing I just worked a little bit with colour and contrast plus I added a touch of dodging and burning in a couple of places. I loved this colourful scene straight away and there was little need to push too far in processing.

I also have some more moody images from the overcast day that I will post once I have completed the post processing work.

I was like ... did he use a filter to get such colors?
I understood from reading that you used a polarizing filter; the effect is really successful
The old castles, the ruins of castles I love it and your photography is really very beautiful
Maybe you will post pictures with overcast and gray weather?

@yoshimiparis: Thank you very much! Yes, I used a polarising filter for this photo and yes, I will be positing a photo from this location from the overcast day :-)

What a magnificent composition that represents Scotland with its hues and this beautiful light! Very beautiful reflection of the castle!

Superb composition with the reflections ! beautiful light and colors !

@Anna Cherer: Thank you Anna. It was a lovely morning.

Lovely composition with beautiful intense colour. An excellent capture of this iconic castle. I hope you enjoyed the whisky :)

@grouser: Thanks Grouser! Yes, I enjoyed our visit to Glendronach distillery and the whisky too :-) Also, whisky was so cheap in pubs and bars compared to Australia.

A superb view of the old castle.

What a stellar capture of this majestic castle nestled in the serene landscape! The colors, warm sunlight and reflections work well together here.

@Steven: Thank you Steven! Sometimes it is just nice to get some lovely clear light to bring out the colours and detail, especially in a fantastic location like this.

Wonderful composition and light. The reflection was worth keeping there, indeed.

A gorgeous image. I love the view of the castle and the bridge but my most favorite is the reflection. It is magnificent. It looks like a painting! 5*

@Nazzareno: Many thanks Nazzareno!