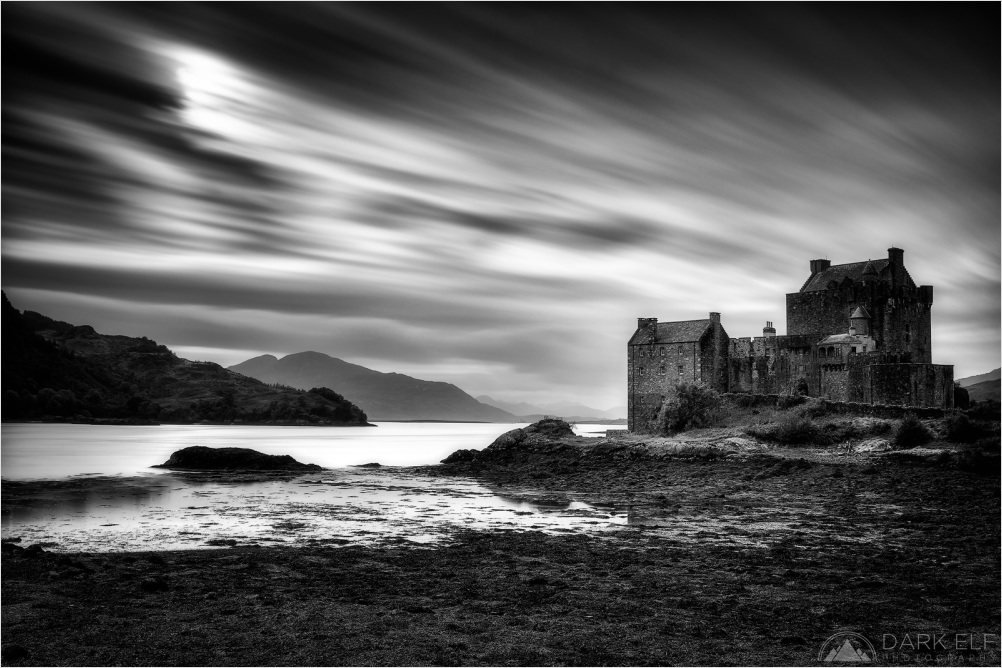 Posted by Darkelf Photography (Perth, Australia) on 10 August 2020 in Landscape & Rural and Portfolio.

Returning to Eilean Donan Castle for a brief moment today. I mentioned under the sunlit photo of the castle that we also stopped there on a cloudy day and this is a photo from that day. The clouds moving fast overhead brought plenty of rain the next day and it was already becoming very gloomy as we travelled towards the Isle of Skye.

My best option was to try some long exposures to give the castle a bit of surreal character and may be even ominous feeling. I felt that scenery was going to work with that concept and I also thought that the contrast between the motion of the clouds and the stillness of the castle would give the building a timeless atmosphere, as though it was standing there, just like that, for centuries. Its history is not quite as majestic, it was destroyed in early 18th century before being re-built in early 20th century. Nonetheless, I felt that as it is still standing today, it deserved that timeless stature that long exposure can enhance.

I chose the view from the eastern side because it allowed me to position the castle at the point where the movement of clouds seemed to be originating and also to minimise the presence of people in the scene. Most of the visitors were gathered near the bridge and on the other side so I was able to get the photo with minimal interruption. Also any people moving about near the castle were blurred away during the exposure and I did not need to close out anyone from the scene. The direction of the light, as the sun appeared between the clouds, was also towards the castle, mountains and loch in the background. This created a natural spotlight on the castle and some nice glow in the hazy surroundings.

We had two different days with different sets of conditions, each producing a very different photo. One beautifully sunny with vibrant saturated colours and one very moody and well suited to black and white long exposure. Which one did you like more?

Definitely I prefer a black and white version which suits well to the mood and long exposure !
Excellent framing and lighting on the castle, the motion of clouds gives a dramatic atmosphere.

@Anna Cherer: Thank you very much Anna :-) This one is my favourite too.

I don't think you can make a choice really, the moods are so different. Each has its own attributes. Here the mood is dramatic with marvellous movement in the clouds and the feelings and textures enhanced by the B/W treatment

@grouser: Many thanks Grouser! Love all the photos you are posting from your part of the world.

Such a dynamic sky that complements the inanimate landscape very well! The tones are beautiful in this composition.

I love this "holy ground". Your treatment is excellent. Top dramatic effect. 5*

Congratulations on the Spotlight! This is a beautiful and very dramatic image, especially with the sky and how it seems to be moving. The light, especially on the water is amazing. The castle itself looks centuries old even though it was recently rebuilt. A gorgeous and very atmospheric image.

@Elaine Hancock: Thank you very much Elaine. The castle definitely retained its old character after the rebuild and its location is incredible.

@Harry: Many thanks Harry! Always good to hear from you.

Wonderful! And an incredible place. Congratulations on the spotlight.

Congratulations on the spotlight. It's very beautiful !

And the time flies by... Very good viewpoint for handling the clouds movement, indeed. All the bricks from the wall is possible to count here :)

What a magnificent composition and atmosphere rendered in this superb BW! A highly deserved Spotlight, congratulations!

@mo.langel: Thank you very much Monique :-)

Stunningly composed. The B&W is fabulous. SUch a glorious mood

The 240 seconds produced a top photo especially the sky, also a fine b/w treatment as I am used to from you.

Great treatment of this image. I like the dark moody textures and tones. Great detail and composition too.

@Ana Lúcia: Many thanks Ana!

Beautiful part of the world, you've captured the scene well.