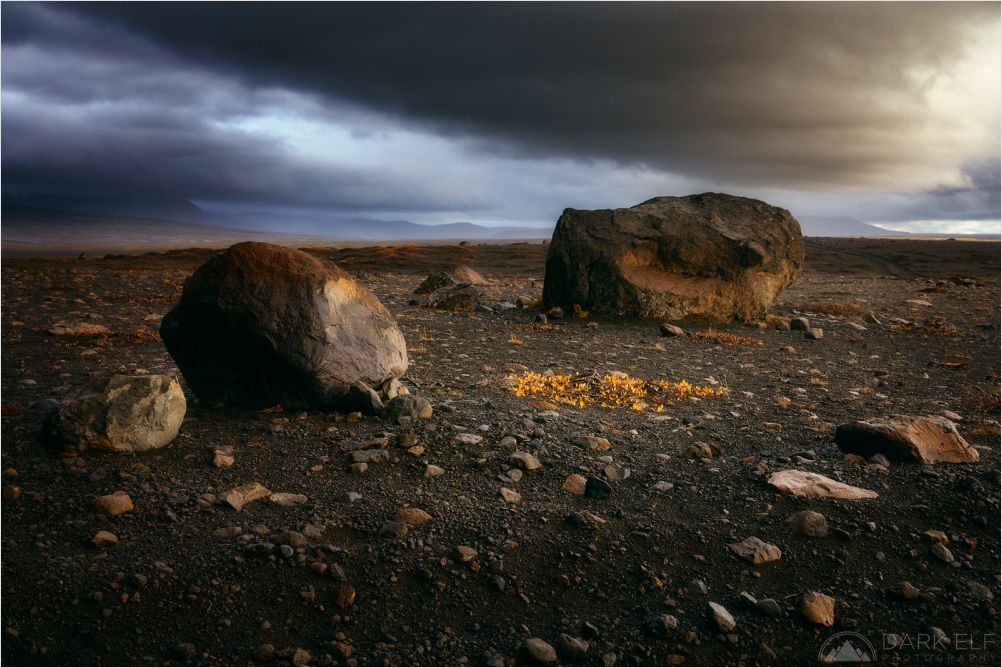 Each time we have travelled to Iceland, we have planned to make an incursion into what I consider is the most interesting part of this country - the desolate interior highlands. Last year we made a return to route F35, The Kjölur Route, which goes right across the centre of Iceland between Langjökull and Hofsjökull glaciers, from Gullfoss in the south to Blöndulón valley in the north. It is probably the most accessible of the highland routes but it still has its challenges. The scenery along the way is well worth the effort though.

We previously travelled this route from the north to Kerlingarfjöll mountain range and we also did the trip to Kerlingarfjöll from the south. Last year was the first time we did the entire route in one drive. It was very much weather dependent. If the forecast was not favourable we would have to drive the long way around via Route 1. We were lucky that weather cooperated with us and we were able to safely make it across. The only spot we missed out on was the previously mentioned mountain range, as it was covered entirely in clouds and there was also a very strong wind present in the upper regions.

We had the path to ourselves when we left early in the morning and as we were driving along, we were able to stop frequently to admire the scenery and soak up the views. With clouds moving fast around us, I was looking for photographic opportunities with some interesting light conditions. One spot that attracted my attention was the one in today's image. It was a very simple composition but I liked the way the light coming through the clouds highlighted the larger boulders and also shined on the spot where small highland shrubs were glowing with their orange autumn colours.

The clouds were broken up somewhat and this created wonderful patterns of light and shadow on the flat terrain surrounding the route. You can see the light shining on the rocks, then dark shadow behind them, then light again in the far distance. I loved the way the conditions helped to create a dramatic background which completed the scene for me and added a bit of extra context to the landscape.

I am continuously fascinated by the landscapes of Iceland and especially by the rugged highlands shaped by volcanoes and glaciers. It seems like another Earth altogether, different almost alien landscape that was born from the fury of the elements impacting upon each other. I hope was able to convey its beauty and nature in this photo.

5***** to this magnificent light and composition

@Marie: Many thanks Marie!

I love the dramatic, mysterious and even mystical atmosphere ! the lighting through this cloudy sky is fabulous ! the strange rocks create the mood of another world as you say so well in your title !

Well captured with the pool of light highlighting the fragile colonisation of the land by plant-life. It is always inspiring to see the resilience of life in the most testing of places. I came across somewhat similar situations on Lanzarote, one of the Canary Islands. The arid climate there makes for a very slow and challenging environment for life to get a foothold on the volcanic landscape

@grouser: Cheers Grouser. I also find fascinating the way that nature tries to re-grow in even the harshest conditions.

Yes, it's like being on another planet! Excellent composition and atmosphere!

It might be this earth everywhere if we keep going like we are. But as Grouser says, life finds a way to thrive. Excellent image !

@Jason Kravitz: Thanks Jason. I feel that some life will always survive on our planet, whether humanity will as well is a different story.

Such an eerie and isolated locale that evokes an element of enchantment! Beautiful capture with a narrative that takes us there.

Looks really like an image of the mars rover. Very nice picture.

@Ralf Kesper: Thanks Ralf. It certainly feelt like being on an alien world when we were there.

excellent landscape from a non-traditional choice of elements

@Harry: Thank you Harry. Always good to hear from you :-)

It almost looks like a moonscape. The light is beautiful. The low hanging clouds create an almost desolate atmosphere. Beautiful color and detail. 5*

I am time from Pune, India

Wonderful ...we are on another planet !

These patterns of light are truly remarkable for the rock textures.

A wonderful soothing photo with beautiful details and skies.

@Willem: Many thanks Willem

or the ... this dark cloud does not suggest anything very pleasant

@yoshimiparis: It could well be very ominous but this time there were just passing showers, a bit of sunshine and the winds were not very strong. So in the end, all was well :-)