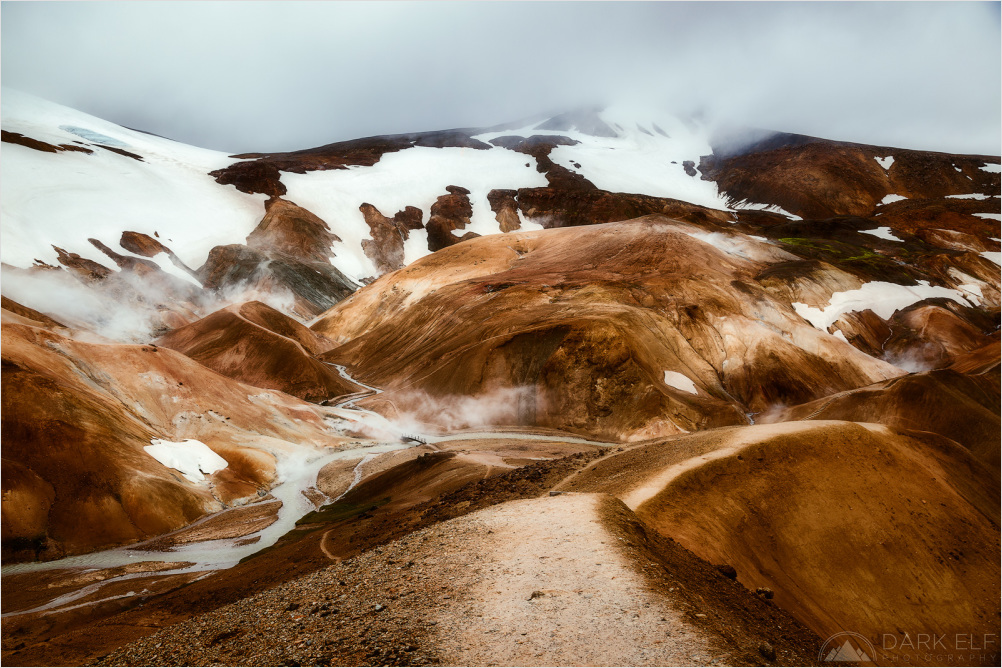 I mentioned in the previous post that we have done a couple of trips to the Kerlingarfjöll mountain range in the centre of Iceland. When we travelled through route F35 last year, our aim was to also stop by and re-visit the rhyolite mountains again. Unfortunately, the weather was the worst that we encountered there so far, with the range covered entirely by clouds and very strong winds blowing all around in the upper regions. When I was writing the last post, I decided to look through my old photos from 2015 to see if there was one from this location that I have not posted yet and that I could work on and do so now.

It comes from our first visit to Kerlingarfjöll and we thought the weather back then was not favourable. Little did we know and at least we were able to see something despite the very strong winds, which kept us from wondering around too much. When we stopped by a year ago, we could not see anything past the path immediately in the foreground and it was completely miserable. We waited for a bit in the car to see if the clouds would blow over but it was to no avail. Such is the nature of Iceland and highland regions in particular. The weather is very fickle and one wither needs a bit luck, which we did not have, or time to plan the visit on a more favourable day. That was the case when we did get some luck on our second attempt and I refer you back to this image to see how what the mountains look like in beautiful sunshine and with fresh snow.

That is not too say, however, that they don't look brilliant even in gloomy weather. I still loved the first glimpse of this unique area that you can see in today's photo. The colour of the rhyolite mixed with the steam rising from hot springs and the patches of snow made for an incredible sight. If you could also imagine the sulphuric smell, you could almost feel like you were standing there with me. It was the first time I saw a landscape of this nature and that experience of awe has stayed with me since that day. I still remember the feeling of excitement and the thought that this is the kind of Iceland that we went over to see.

It looks rather peaceful in this image, in a way, but I had to lean forward to counter the wind when I was taking this shot and I could hardly look through the viewfinder as the wind was directly against my face. There were very brief moments of respite and that allowed me to take a reasonably sharp photo at lower ISO. I was listening for the sound of howling wind to cease in the distance to be able to anticipate the next tiny moment of illusive stillness before the wind continued on relentlessly. It was also difficult to even attempt to take of a glove to change settings on the camera and there was no chance at all of setting up a tripod.

There was no one else around and together with the atmosphere of the landscape it made me think of an abandoned planet kind of mood. If we were ever to depart this planet in a hurry, who knows if any entities visiting in the future would not find it all looking exactly like that...

Giant and magnificent this red desert. A superb photo

indeed, it is this effect that your image gives. A grandiose landscape, hard, cold and not very hospitable

@yoshimiparis: Thank you Yoishi. I am glad you felt the feelings I tried to convey in this photo.

An amazing wild landscape ! a very inhospitable planet indeed ! a great view and a sense of scale, superb colors !

an exceptional landscape with the most extraordinary colours and textures. My eye is drawn by the track to the little bridge in the valley

@grouser: Many thanks Grouser. Thank you for your continued interest and comments :-)

The strange atmosphere is very well done, it feels like another planet! Excellent composition and framing! We imagine the immensity of the landscape by discovering the small bridge over the river!

After reading your narrative, I find it amazing that you were able to take such a beautiful photograph. I can't help but think of a chocolate and vanilla ice cream creation when looking at this landscape. A very beautiful (and delicious) capture!

@Steven: Thank you Steven. I was amazed that anything at lower ISO valued came back sharp at all. The chocolate and vanilla ice cream comparison is spot on.

Strange colors everywhere... An I love this tiny-looking bridge in the middle. I haven't been in Midland range yet, hope to be there someday...

@Vaido: Thank you Vaido. I picked the composition with the bridge to post because of the sense of scale. Otherwise it would difficult to imagine the size of the landscape. You have to explore the highlands if you ever have a chance. This is where for me the heart of Iceland is.

I'm so happy for this well deserved Spotlight !
Congratulations my dear !

@Anna Cherer: And thank you again Anna :-) I appreciate all your kind words and support.

Splendid image !! Congratulations on your Spotlight !

Congratulations on the Spotlight! This does really look like a scene from another planet. And such a difference from the previous image. It is amazing how the clouds and the sky and light can totally change the way a place looks and give it a total different feeling and view. A magnificent composition.

@Elaine Hancock: Many thanks Elaine! Glad you like the change in mood and scenery. Thank you for your comments and support :-)

Congrats for this Spotlight !

@Elaheh: Thank you Elaheh. Lovely to hear from you :-)

Back to congratulate you on the well-deserved Spotlight on this "delicious" capture!

That is so beautiful.

The only thing missing from this shot is a bunch of hobbits ...

Thanks to the excellent position with the light part in the foreground, a nice depth has been created in this photo.
And for me the most spectacular thing: is the bridge !!

A stunning landscape!! The brown colors are so incredibly intense with just a tiny hint of green. Superb contrasts due to the snow ...