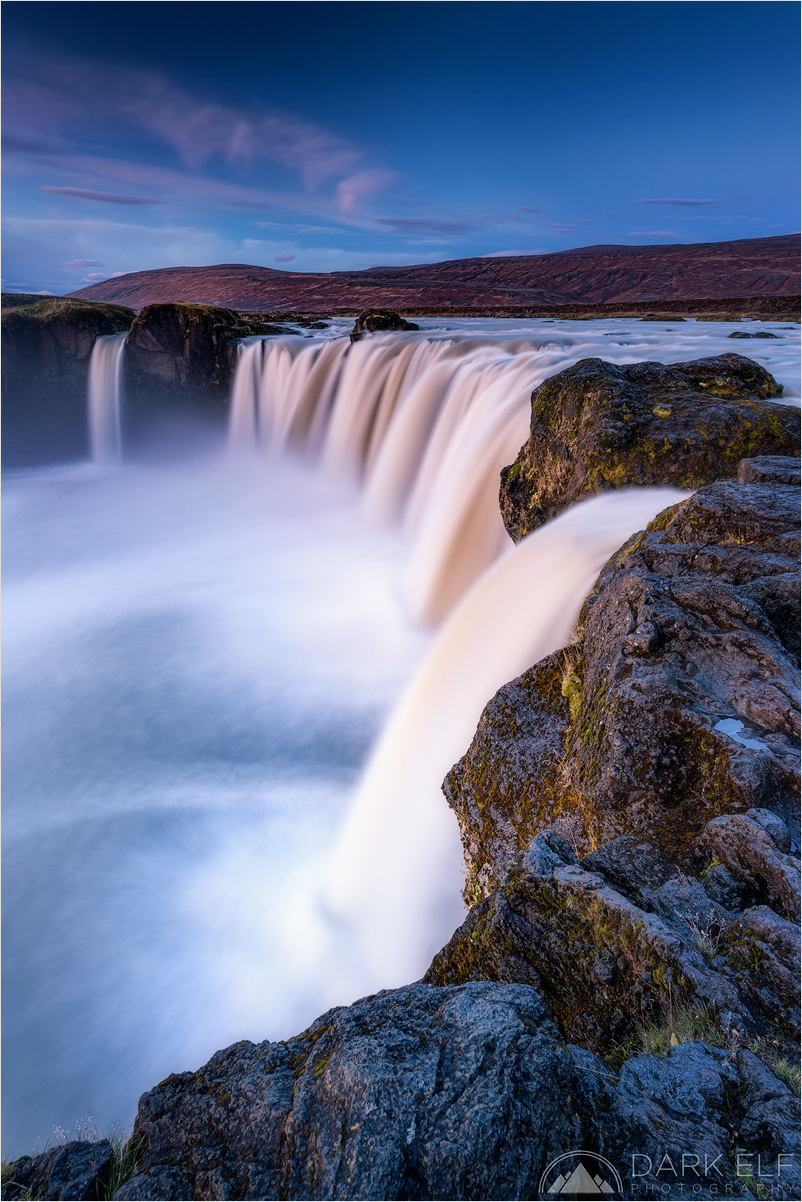 Out Of The Blue

Posted by Darkelf Photography (Perth, Australia) on 1 October 2020 in Landscape & Rural and Portfolio.

The mighty Godafoss waterfall in northern Iceland on a beautiful crisp morning last year. You cannot just go past Godafoss without stopping, you can even just about see it from the car along Route 1 and it is impossible not to stop. The water fall beautiful, massive, powerful and tricky to photograph, especially if one tries to get in very close. You have to either go with a very wide lens or to shoot for panorama to stitch later in post processing. Then you also have to endure the endless spray that raises above the fall and swirls with the wind as the tonnes of water splash down.

I chose this vertical composition because the water flow was the clearest on this side of the waterfall. Its other side, which is to the left, was covered in very fine spray and not much detail was visible. It was also facing away from where the sun was about to rise and I wanted to photograph the glow in the streaks that the morning light created. You can just see a hint of warm tones in the falling water. It was not a colourful sunrise so the effect is subtle and I wanted to keep it that way. The tones in the sky and water were these beautiful deep kind of blues so I also wanted to preserve the feeling of blue hour atmosphere in the scene. There was enough cloud in the sky to prevent it from being devoid of any texture and I prefer to have some cloud around rather than none at all. I think almost all photographers do.

I tried some shorter exposures to see what the flow would look like but I did not like the texture of the water at the bottom of the fall. It looked very messy and distracting. Thirty second exposure was a good balance between achieving a pleasing smoothness to the water surface and not losing all the texture from the falling water. It is always worthwhile to experiment a little with different shutter speeds to see what the final result could be. Having different options is also great when choosing later which photos to post and to process. The final texture of the dispersed water was the effect that I was looking for here.

Godafoss is somewhat of an enigma of a waterfall for me. I love it, I enjoy being there but I always struggle photographically around it. On the few occasions that we visited, I tried to look at it from a different perspectives to see what else I can discover. One perspective I have not tired yet is from the bottom of the falls but for that the wind would have to be very favourable to blow the spray away, otherwise it would be very difficult to take a photo with continuous wiping down of lens and filters. That hopefully will be something for another trip to Iceland. Even if I walked away with no photos, I would still be very happy to see this place again and again.

Superb place and long exposure on these falls

A wonderful place ! excellent framing, I love the soft tones and smooth flow of water !

Like the overspill from the churning of the Ocean of milk in Hindu mythology and a beautiful contrast between the milky waters and the rocks with just that hint of warm light on them. Nicely composed with the arc of the falls

@grouser: Thank you Grouser! The curved line of the falls attracted my eyes right away.

Awesome long exposure image!! The water is like cream ...

@Dutchess: Many thanks Dutchess :-)

A beautiful view as the milky waterfall is nestled between the blue hues! Good choice to go vertical.

@Steven: Thank you very much Steven

Splendid composition in long exposure! It looks like a milk cascade! Superb framing!

@omid: Many thanks Omid

A well presented and managed shot.

A beautiful place is perfectly captured.

You caught the light wonderfully on the water .... I love it!

Absolutely beautiful! This is a gorgeous point of view. The water looks like soft cotton! A magnificent image!

I love those rocky textures around the water. Godafoss is a great place...