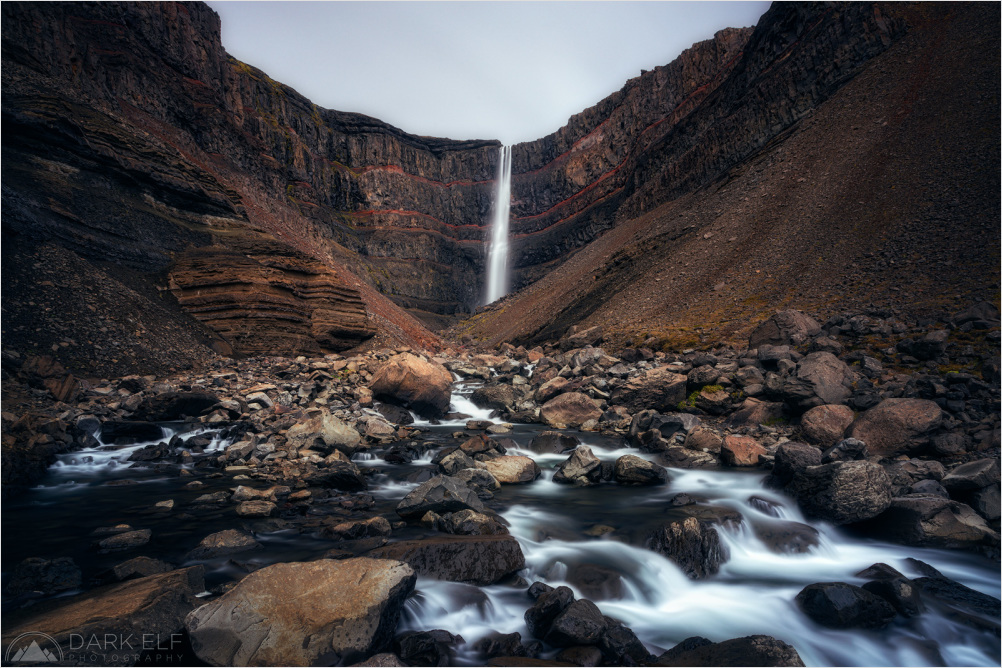 Posted by Darkelf Photography (Perth, Australia) on 30 November 2020 in Landscape & Rural and Portfolio.

We did not plan to return back to Hengifoss last year but wild Icelandic weather revised our plans for the Eastern Fjords, which allowed us to make the hike again. I didn't mind too much as it is one of my favourite ones in Iceland. For some reason fjords have never treated us kindly in terms of weather. When we drove across the mountains to stay in Seydisfjordur, visibility was so low that we were crawling at 10km/h and constantly checking on maps as to where the road was leading. At least on the next day, the clouds lifted high enough to be able to drive more safely and that allowed us to make the return trip to Hengifoss.

The hike is quite strenuous but the view at the end is spectacular and well worth the effort. It is also surrounded by tall cliffs, which makes it reasonably secluded and calm even in otherwise windy conditions. The waterfall is almost the background to the full story here. What fascinated me the most were the amazing basalt cliffs and the crimson veins running through them. These layers and textures combined beautifully with the scattered rocks and stream in the foreground.

Depending on conditions, one can walk almost all the way up to the falls and there many opportunities for composition along the way. I have already posted vertically oriented photo from this area and this time I decided to go with a horizontal view. I think the stream was a little wider flowing this time around and I also wanted to bring in more of the basalt cliffs to each side of the waterfall. I liked this scene because everything seemed to radiate from the point just under the falling water and the light also helped to enhance that feeling.

I looked through the different frames I took of this composition. They all had different shutter speeds and also each had a slightly different light falling on the scene. Some were very dull, some had light falling on different parts of the valley. This one had the light falling mostly on the converging slopes, rocks just where the stream re-appears and also a little bit on the cliff face in the background. I think longer shutter speed worked in my favour here because the passing clouds allowed the light to gradually illuminate the scene more and more during the exposure. As usual, I did work on it further in post processing and used dodging and burning together with vignette to further emphasise that light but without it being present in the first place, it would not work that well.

This is yet another great location in Iceland. There is another bonus waterfall along the way called Litlanesfoss, which also has beautiful basalt column surrounding it, but I am yet to get a photo decent enough to share. It looks like I will have to return there again in the future ;-)

Very beautiful crater with superb layers. I really like the long exposure on the water. 5*

Superb framing ! I love the colors of the layers on the rocks ! the long exposure give some softness !

These rocks seem to have a life of their own! Nicely captured.

This is fabulous. Superb result. 5*

@grouser: Thank you Grouser. There are so many fascinating geological formation Iceland.

Amazing shot of a strange place!

@Akbar&Armaghan: Thank you very much!

Superb framing and color! The place is magnificent and grandiose, I love it!

Photographed from a beautifully low point of view and the slow shutter speed naturally gives a beautiful effect.

Beautiful layered strata captured in this canyon's face! I love the low PoV.

An incredible image. It must have been amazing to be standing at the bottom of these cliffs that are surrounding you and looking up at the waterfall. The colors are beautiful with the red veining that seem to accentuate the layers of rock. I love the view of the waterfall and the long exposure. The water is gorgeous. Without out anyone else around, the silence except for the water must have been amazing. A stunning image. 5*

@Elaine Hancock: Thank you very much Elaine! You always take the time to study my photos thoroughly and I enjoy and appreciate your comments greatly.

this is breathtaking - so beautiful. I am surprised that a 25 second exposure left any detail in the flowing water, but the only spot completely white is in and near the lower right corner. (Of course your skillful dodging and burning might have contributed to that). Your 24mm lens seems built for that scene.

@Harry: Thank you Harry. The bright spots are due to the long exposure. I do not mind them in this instance as there was not much texture in there anyway.

Great balance between foreground and background... I love those layers in the back.

This is spectacular. Love the rugged rocks and the soft water.

thanks for the reply. waterfalls and rapids are favorite subjects to shoot when I can get up to the mountains, so I am familiar with the challenges of conveying movement and preventing blow-out. Even at ISO 50 (and f16) 25 seconds is a challenging exposure. I have experimented with ND filters (not graduated) and find them useful only on the brightest days. Your shots are an inspiration for me.

@Harry: No worries at all :-) I enjoy when someone takes the time to study a photo in depth and appreciate all the feedback. Often when you mention something about a photo, I look back on it to see whether I can improve in the future. This is the best kind of discussion to have about photography. It fuels creativity and also encourages improvement and learning.

I always enjoy your story's that go along with the photograph. The waterfall is beautiful but what really interested me is the different colors of earth along the cliff, browns and red veins as you put it. I thank that is really cool. :))