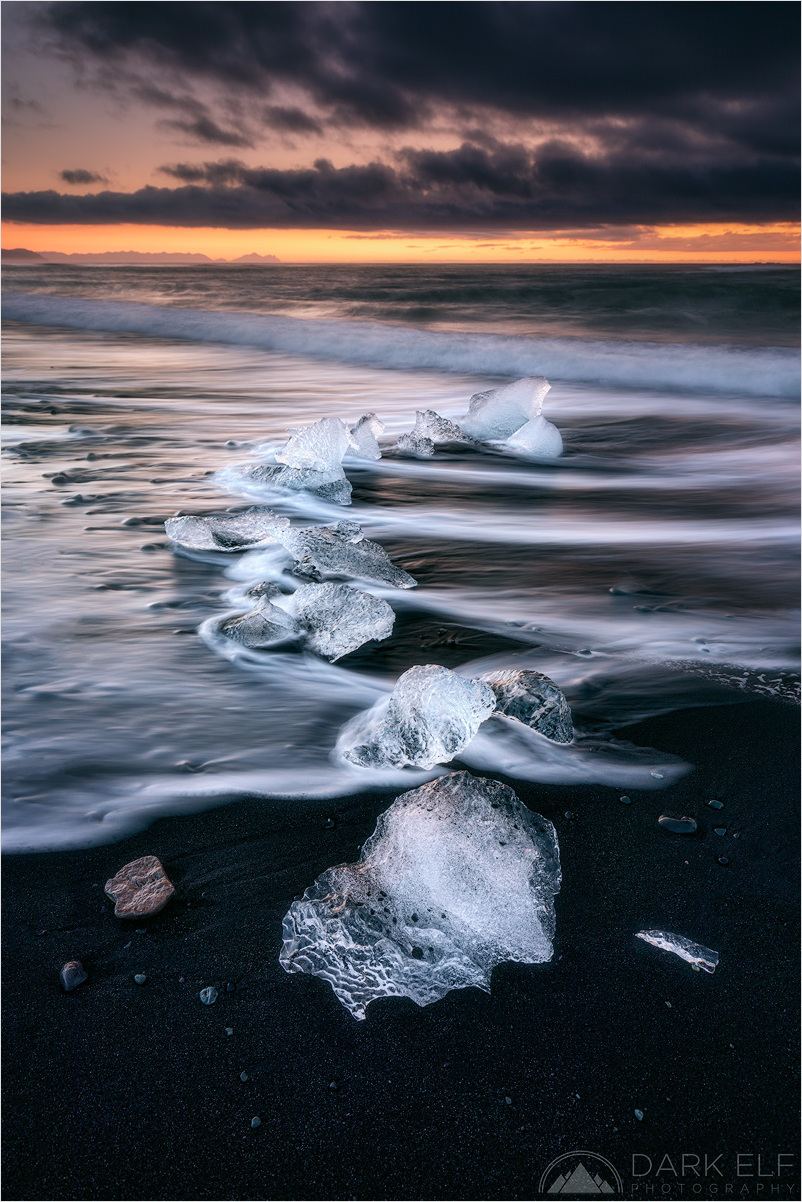 Posted by Darkelf Photography (Perth, Australia) on 14 December 2020 in Landscape & Rural and Portfolio.

There is something special about the black sand beach near Jokulsarlon Glacier Lagoon in the south of Iceland. It is called Breiðamerkursandur in Icelandic and it is also known as Diamond Beach. It is still one of my favourite locations. It has been photographed many many times but it felt just as magical to be out there in 2019 as it was when we saw it for the first time ever. I was able to spend two mornings photographing the icebergs returning to the shore after they have been pushed out of the lagoon into open waters by outgoing tide.

The mornings were quite cold, around zero degrees, and I had to be well prepared with gloves and even balaclava to be able to spend couple of hours each day looking for icebergs to photograph. One item I could not find room enough to pack was a pair of wellington boots. They would have been really handy to be able to get closer to the most interesting ice formations. I did have my waterproof boots and trousers though and I even bought some waterproof socks. They allowed me to at least not worry when slightly bigger waves reached further up the shore and I did not have to run away every time while being able to catch the lovely flow of water around the ice.

It was actually the busiest that I have seen this location, with large groups of touring photographers descending on the foreshore on each morning. I am not sure whether there were more photographers or icebergs around but in the end everyone managed to find a spot for themselves. I think there was more photographic gear around than in any camera store that I have ever seen :-) We were lucky enough that there were plenty of icebergs on the shore. They were mostly small but they lined up on the black sand as far as the eye could see and they presented lots of compositional possibilities, especially when combined with crashing waves and the water moving around them. It can happen that there are no icebergs on the shore at all and we have also experienced that during our visit in 2017. It could be very disappointing to arrive only to find the beach empty with no ice to be seen.

You have to very quick to photograph a given piece of ice or their combination. Incoming waves move them around quite a bit and often you may only get one chance to catch them in a specific position. A couple of times I took a photo, then took another soon after only to see that the iceberg has already drifted and I had to re-compose my shot again. Shutter speed is also important in these conditions. I used 1.3 seconds here, which was probably a little risky because the ice could have moved and become blurred during the exposure. These icebergs stayed in their place, however, and I was able to get the photo I envisioned. I did not want to go to higher ISO and I wanted sufficient depth to keep all the ice sharp. This meant that I had to go for longer shutter speed and it also helped with getting great smooth flow of the water.

I liked this particular arrangement of icebergs when I saw it. They made a good leading line through the flow towards the sky that had a touch of morning colour and dramatic clouds to complete the image. I also liked the line of mountains just over the horizon to the left, if you enjoy that kind of small detail. The one furthest to the right is Vestrahorn (one form my previous post) and having a hint of it in this photo made a nice south coast connection for me. The south has this wonderful wide open feeling and on a clear day you can see for miles along the coast. Vestrahorn is about 40km in a straight line away from Diamond Beach and being able to still see it from here was fantastic.

If you like this photo from Breiðamerkursandur then the good news is that I have a few more to process and post from this location and will be sharing them a little later on.

Troubling ... This catch is a real gem. The magic of Mother Nature. Fantastic photo! 5*

Wouaou lucky you a 5 star frame

Such a beautiful shot from an amazing place!

You managed to catch an excellent composition despite these complicated conditions... This shutter speed seems to be perfect here.

@Vaido: Thank you Vaido! The conditions were dynamic indeed but that just made it that much more enthralling.

A famous place of Iceland ! I love it ! A fantastic composition with beautiful details in the foreground and low angle. Magic !

A stunning image that appears so ethereal with the wave patterns created by the slow shutter speed! The color of the water appears to glow in the lighting.

@Steven: Thank you Steven. Yes, some of the glow over the horizon was reflecting in the water.

great depth of field and a lovely lead in for the eye from those chunks of ice to the beautiful sky. The back story makes an interesting read too. I like the idea of waterproof socks :)

@grouser: Thanks Grouser, as always! Waterproof socks were just perfect. Even if some water got into my boots, my feet still stayed dry and on that cold morning you would not want to get your feet wet for too long.

Congratulations on the spotlight.

Congratulations on the Spotlight well deserved !

Congratulations on the Spotlight! This is a stunning image! You captured the water beautifully. It is just magical. The light in the sky is gorgeous. I love how you got this image that has such a feeling of isolation and peace when there are a crowd of photographers everywhere. You would never know it! When I was a child, we lived in Hawaii when it was still a territory. We visited the Big Island and went to the black sands beach there. I will never forget it.

@Elaine Hancock: Thank you Elaine! I appreciate your words very much. There is just something so different about black sand, isn't there?! I also remember the first time I walked out onto a black beach and it was so surreal.

Pure magic from front to back! Your attention to detail is rewarded once agin with a perfect image. Congratulations on the Spotlight! It's very well deserved.

A masterpiece again. Congratulations for this Spotlight.

@Ralf Kesper: Many thanks Ralf!

Wow! a troublesome shot but worth making!
This coast is amazing to take such a wonderful capture by a longexposure specialist like you dear friend
Good luck and stay safe
:)

@Akbar&Armaghan: Thank you very much my friend :-)

@Gérard: Many thanks Gérard

You have captured the tranquil icy water beautifully with the icerocks

A very nice composition with this nice ice chain on the black sand beach! Congratulations on the Spotlight!

cool how the waves mimic the clouds

@Daniel: Thanks Daniel! It is great to find these patterns and similarities in nature.

That is such a cool shot!!!! I love it! That ice is so awesome to look at

A magical photo thanks to nature and photographer and beautifully presented vertically.