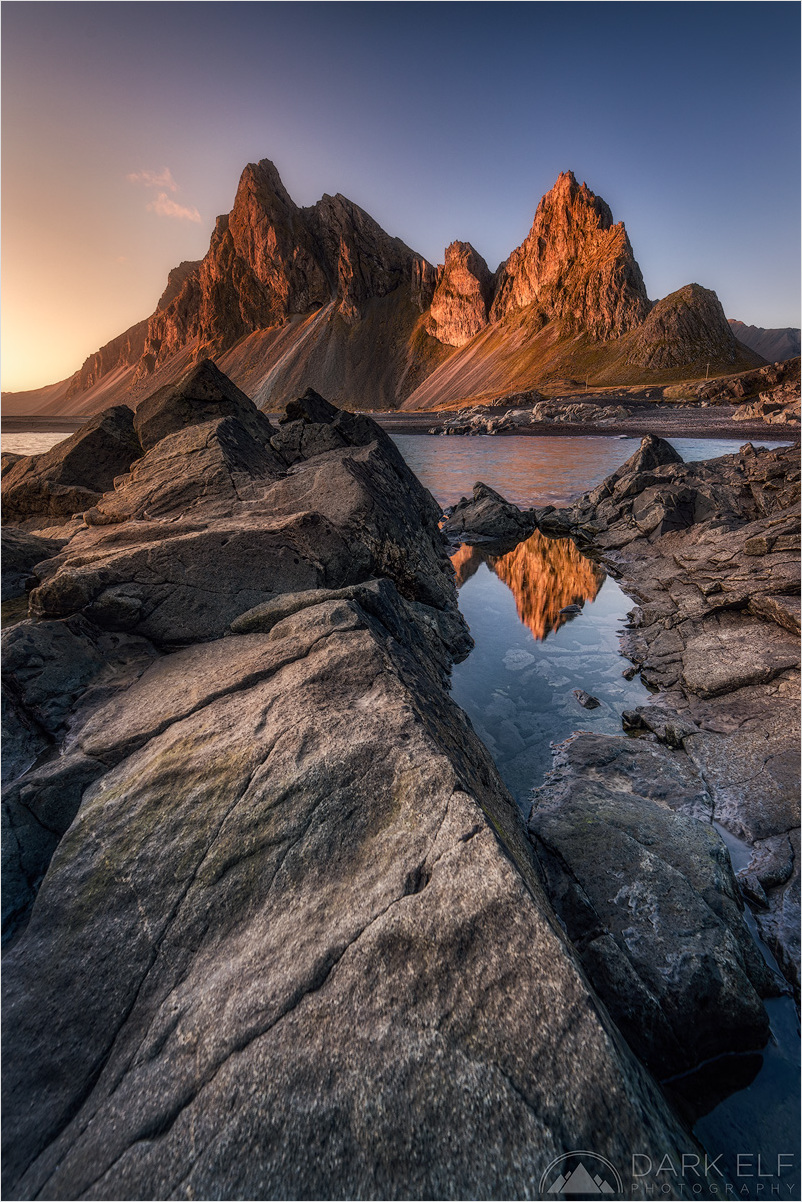 Posted by Darkelf Photography (Perth, Australia) on 21 December 2020 in Landscape & Rural and Portfolio.

You might have seen photos that I posted of Vestrahorn peak, including one very recently. This is its eastern sister mountain called Eystrahorn. It is located further to east on the other end of a stretch of coastline made of black sands, interrupted by a few bays and rivers. This area is called Lón, which means 'lagoon'. We have driven past this beautiful location on a number of previous occasions, usually in a hurry to get from one side of Iceland to another. Last year we were able to stop there for a bit longer and we spent a bit more time exploring the area. I also had one evening when I drove out there by myself and roamed around for a couple of hours looking for compositions and taking in the views.

Once again the clouds have decided to abandon me in my photographic endeavours and that made me search for compositions that worked better with clear skies. Such situations were a constant feature during our travels in Europe last year. I think we experienced may be four or five instances of colourful sunrises or sunsets over a four month period. Otherwise it was either clear skies or complete cloud cover. I am used to that now and use these times to practice my vision and composition skills so that I can still take a decent photo or two.

As I was driving along, I realised I was going to get some lovely evening side light on the mountains before sunset and it was a matter of finding a good foreground to make this photo more that just a basic mountain shot. As you can see, the water in the bay just past the foreground rocks was rather blurred and its texture was not all that exciting so I explored the shore to look for other elements. The rocky shoreline presented plenty of different options and I was really excited to find this little pool of still water where I hoped to get a reflection of one of the peaks. It took a fair bit of moving about to get a final composition that I was happy with.

Firstly, I was looking for separation of the foreground rocks and the mountain. It was not fully possible, however, because the higher I had to get on my tripod, the less reflection I had in the water. Secondly, the lower I got to maximise the reflection, the more the rocks protruded onto the mountains. After moving a few centimetres at a time, while being careful as the rocks were quite slippery at this spot, I was able to establish this composition. I think the foreground connects well with the mountain without overtaking it, the reflection has enough substance to it and the area of rough water was reduced as well. I also feel that I still managed at least some separation between foreground and the mountains.

One last final consideration was whether to shoot the entire scene in one frame or take a number of photos with different points of focus and then focus stack them in post processing to maximise depth of field and sharpness. This decision was taken a little out of my hands because I found this composition not long before the sun went below the horizon, which meant that the beautiful light on the mountains and in the reflection would be gone very soon. I took this photo as a single frame and it was just in time. When I took a horizontal perspective a few moments later, the light was already greatly reduced and it did not look anywhere near as good. I used a very wide angle of 14mm for this photo and I was confident of getting good depth of field. The extreme foreground is the only area just getting out of focus but I was alright with this sacrifice to get the rest of the scene as it is.

Sometimes, when I write my text to give you some context and insight how I take my photos, I feel like I make it into some kind of great struggle story. It is challenging but it is never a struggle as such, even if sometimes the photos do not come out at all. That is the exciting part of being in the field. If it was as easy as just pressing a shutter button and moving on, I do not think I would get ever into it. For me, when I have move around to explore the area, when I have to make changes and adjustments, when I have to think about choices and make decisions, that is what makes me love photography. That is what also makes me embrace environment and landscape around me because I can take the time to study and learn it, to feel it before I take a photo. That is where the connection is established and I hope that you can feel it as well in my images.

This is my last post before Christmas so I would like to wish everyone a very happy, safe and peaceful Festive Season!

A beautiful study of environment to find the best place, composition and framing ! a superb result !
I wish you and beloved yours a happy christmas season !

@Anna Cherer: Many thanks Anna! All the best to you and your family.

Yes it's amazing how rapidly the light changes and shadow areas, especially early and late in the day or with cloud movement, transforming the image from moment to moment. This is especially noticeable if you ever try sketching a landscape :)
A beautiful capture here with those wonderful needle crags and the reflected peak in the pool framed by the strong lead in lines of the rocks

@grouser: Thank you very much Grouser! Hope you have a good Christmas with your family in these strange times.

A superb composition with a wonderful light and very beautiful colors! What a beautiful place you captured!

Perfect color and light in this magnificent image. 5*

@Florence: Many thanks Florence :-)

A stunning composition of this rugged landscape with beautiful textures and colors! The reflection of the peak in the water makes an eye-catching "heart" in the center. Merry Christmas and Happy Healthy New Year to you!

@Steven: Thank you very much Steven!

such beautiful composition, lights & reflections!
A M A Z I N G !!!!

This image is just stunning. I love the light and the color. I am glad that you did not slip on the wet rocks. I love how you captured the reflection of the mountain in such a perfect spot. This is just gorgeous! It almost looks like it is from a different planet! 5*

Wondrous image! I enjoy your photos so much and your write-ups. I would be proud to have taken this amazing photo. Merry Christmas to you and yours.

You take common earth elements - rock, water and sky, and turn it into a masterpiece. Fabulous.

A stunning photo to end the year and enjoyed reading about the process too. It's incredible how much thought goes on in a compressed period of time and how much of it becomes 'hard coded' with practice. Take care and see you in '21.

@digitalCG: Thank you greatly Chris! There are situations when a lot is going on before a photo is taken :-) All the best to you and your family.

Your story of taking photos in last high speed fading lights of the day end reminds me of similar experiences at the fields of landscape photography!your result is fantastic especially that reflection in that little water.
I learnt a lot from that beautiful caption and I think you can be a good novel writer also
:))

@Akbar&Armaghan: Thank you very much! I appreciate you taking the time to read my text. Indeed, we can relate to many different situations as photographers and often it is good to know that others are experiencing similar challenges :-)

That is absolutely amazing.

Great story and an excellent resulting image. Your efforts to find interesting compositions and to immerse yourself in the landscape are reflected in your wonderful images. In this one, that light on them mountain is stellar and the peak reflection isolated in just in one of the pools is remarkable. Merry Christmas to you and your family !

Fantastic pov and framing. I love it.

Merry Christmas to you and your family! Stay warm, stay safe.

@B. Thomas: Thank you very much Barbara! All the best to you and your family. No problem staying warm here, it was 40 degrees C over the last two days :-)

This is a rugged landscape ... my old legs couldn't walk to a place like this anymore.

@CrashRyan: Cheers Ryan! I think if you could get to Iceland, you would be alright. The beauty of Iceland is that so many rugged places are easily accessible because stunning scenery is present everywhere. This spot is just off the main highway and in fact where you a couple of power line poles just under the mountain to the right, this is where the highways runs.

I like how the ridge in the foreground leads the eye to the peaks in background.

@Steve Carey: Thank you very much Steve. That was part of my compositional vision.