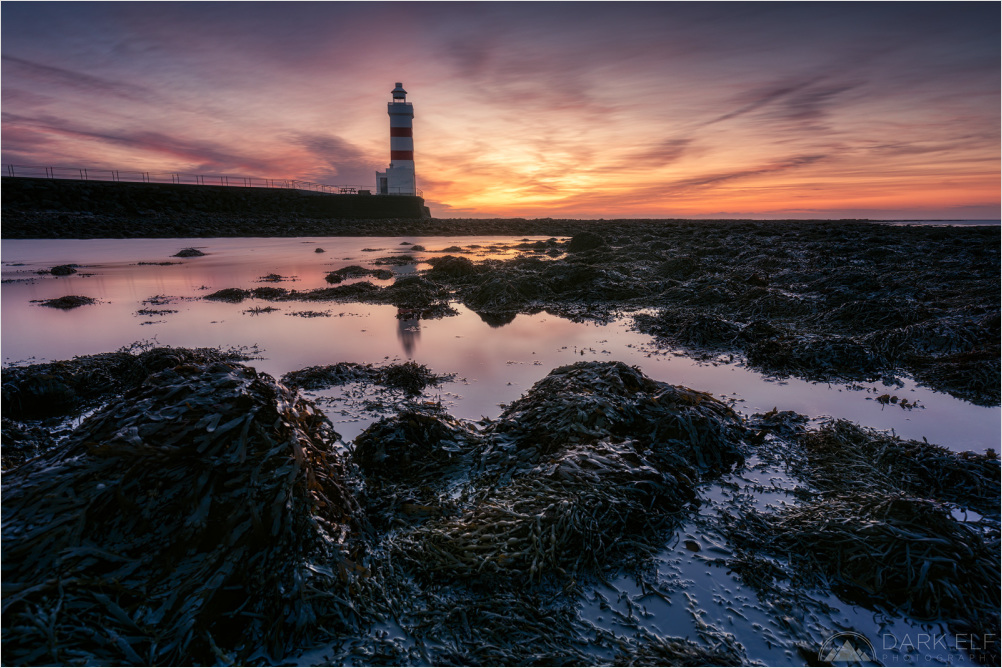 Posted by Darkelf Photography (Perth, Australia) on 6 January 2021 in Landscape & Rural and Portfolio.

Hello in 2021! When we visited Iceland back in 2019, we kept waiting and looking for a beautiful sunrise or sunset with colourful clouds and golden light. In the end, we kind of found it right on the very last evening of our trip at Garður Old Lighthouse on the north western tip of Reykjanes Peninsula, not far from Keflavik Airport. At this stage I was willing to take any hint of colour in the sky and at least that evening gave us a lovely send off. Some northern lights would have been nice but that was just asking too much ;-)

We spent a bit of time in the afternoon and evening discovering the area of Rekyjanes to the west and north of the airport. There are a couple of lighthouses there and interesting bits of coastline can also be found when driving around. I was looking for some interesting compositions in case aurora was forthcoming but the forecast was not favourable and after driving back and forth we returned to Garður ready to call it a day.

This is where I noticed hints of possible colourful sunset. The clouds were hovering nicely just over the horizon and sun begun to break through after what started as a bleak and gloomy day. We had enough time to explore around the Old Lighthouse and I was able to to look for possible spots to take photos later. We were lucky enough that the tide was quite low and that uncovered enough of the shore to use it as for a foreground. I was able to walk out on the fields of seaweed and jump around some water pools to see if I could work them into the photo.

The seaweed was rather slippery and slimy and I found myself ending up in it a couple of times as I carefully threaded my way around, while keeping half an eye our on the sea in case the water level was beginning to rise. I managed to find a couple of compositions that I was happy with and where I could extract enough detail to add interest in the foreground. I had no problem keeping the foreground darker and I felt that it gave the seaweed additional alien like feeling, especially to the piles closest to the camera.

The light and colours in the sky were on the subtle side but still very beautiful and they reflected nicely in the water. That added a bit of separation to the seaweed, which I do not think would look too attractive on its own, if it engulfed the entire foreground space. I had my polarising filter on, as I usually do, however in this instance I turned its effect to almost minimum to retain the reflected colour in the water and also to give the seaweed a bit of extra shine in the highlights. I was hoping that it would result in better texture and detail.

It was a nostalgic evening in a number of ways. I was really longing for a decent sunset by that time of the trip and also I knew were leaving Iceland in the morning. It is my favourite travel destination outside of Australia and while we always hope to return, one never really knows if that will ever happen. Still it was a lovely evening to finish and a beautiful sight to take in before moving on.

The explanatory note is very interesting and this sunset is splendid. I love sunsets and I never get tired of them. Mother Nature is the greatest of artists and the photographer who took the picture is not bad either. LOL!

@Marie: Thank you very much Marie ;-)

I missed this one, the first thing I thought of was falling down, I've been walking on seaweed. Then the light house with the sunset, I like this one. Thank you for sharing your story as always and amazing photograph.:))

@Linda Candilas: Many thanks Linda!

Yes it looks like bladderwrack which can be lethal to tread on. However the risk paid off here and the light on it is very effective. The lighthouse is nicely positioned with its delicate reflection and the subtle tints in the sky round the whole thing off beautifully

@grouser: Thank you very much Grouser. I had good sturdy boots and used my tripod as a walking stick to make my way around :-)

A spectacular image. The Lighthouse and water look excellent under this colored sky. Superb work. 5*

Wonderful seascape. This point of view is great with all this water holes and seaweeds. the lighthouse looks beautiful in front of this amazing, moody sky. 5*****

@Ralf Kesper: Thank you greatly Ralf. Hope you have a great 2021!

A magnificent capture of this wonderful sunset! The shades and reflections are superb! A success to end in beauty your stay in Iceland!

@mo.langel: Thank you very much Monique! I wish we had a few more sunset like this one but it was great to finish off like that.

Such a dynamic sky full of energy and beautiful color! What a reward to capture this on your last evening. A stellar composition!

@Steven: Thank you Steven. Loved the entire trip but it was great to sign off with a beautiful sunset.

@Florence: Many thanks Florence

Absolutely beautiful! The lighthouse is in the perfect position in relation to the sunset. The colors in the sky are gorgeous and I love how they reflect on the water. The seaweed creates nice texture, but I would not want to slip in it (and I probably would do that)! I appreciate your narratives and how you write about your thought process leading up taking the photograph. It helps me with thinking about composition. 5*

You certainly know how to capture detail - a great new perspective on the world.

The seaweed texture in the front is beautiful... As the colors in the sky, of course.

A gorgeous image for sure. The color in the sky and on the water is perfect. I'm glad you got the reflection. A super way to end your adventure.

This image is perfection in every way. I could not write well enough to do it justice.

@B. Thomas: Thank you Barbara. I appreciate all your comments greatly.

A beautiful, already a little dim moment before the sun disappears behind the horizon

I think you have left a part of your soul in Iceland :)
I expected you to tell me the continuation of that beautiful description:"At night we camped there by the lighthouse and in the morning we went from there to the nearby airport"
:))
The photo is also very beautiful, although in my opinion the black foreground is not attractive enough to form a large part of the photo, and if I were you, I would use external light to show the green color of its algae, and also move to the left to make the lighthouse reflex more complete.
Happy 2021
Stay safe and happy

@Akbar&Armaghan: Hello my friend and as always that you for your honest opinion. There are always compositional factors to consider and yes, I thought about getting a full reflection but then I would lose the seaweed in the foreground, which I really wanted to be in the frame. On my (calibrated) screen, I can see every single stand of seaweed so it is not a dark blob, but I can see how that would note be attractive in this image if it was just a dark mass. The algae had a dark brown colour in this instance so illuminating it with external light would not make much difference. But these are the choices we make as photographers. Sometimes they work better and sometimes not so well :-)

Wonderful composition and reflections in the water.

the clouds, sky and lighthouse are delightful, subtle rather than dramatic, but still nice. The foreground looks like muck and washed up kelp, which is certainly less photogenic than the magnificent rock formations you so often feature. I know one can only photograph what is there, but...

@Harry: It is what it is Harry :-) I appreciate your opinion regardless.