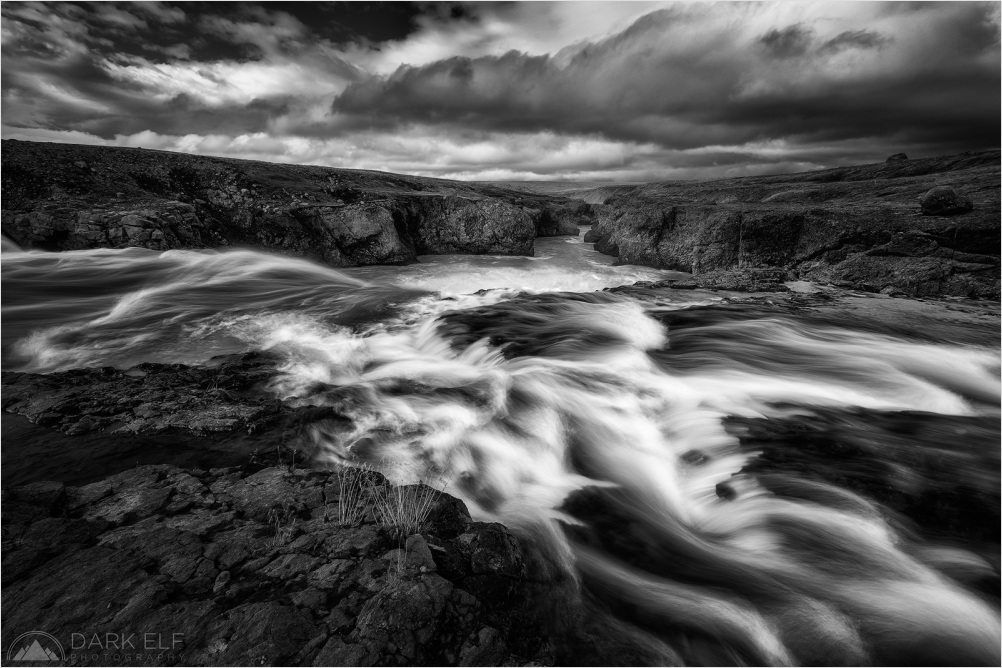 Previous photo was of our last evening in Iceland but we are staying there for a little longer with few more photos to come. This is another of my black and white impressions of Iceland and it comes from a lesser known waterfall along Route F347 to Kerlingarfjöll mountains. I believe its name is Gyglarfoss but I am not completely sure. It is just off the road and we noticed it as we were driving one way and stopped on the way back.

What attracted me was the flow of the water. There are actually two streams/rivers here that join together and come out through the canyon you can see in the background. The bigger and deeper stream flows from the left and the smaller but feistier one flows into it from the right. I ventured out as far as I could onto the headland and was pretty much surrounded by flowing water from most sides. For a moment I could not really tell where was the water coming from, it was such a mesmerising effect.

I liked this particular vantage point as it allowed a good look at the cliffs on the other side, as well as the exit point of the stream, which for me completed the composition nicely. I tried some wider views from a little further back but this time the foreground was even less interesting than the seaweed in the previous photo I posted, so I settled close in to the water while still retaining an anchor point in the left bottom corner. Wider view also diminished the presence and flow of the water and this was the central point of my composition.

This was a scene that did not seem to work with longer exposures. The water was ending up completely washed out and I wanted to keep the texture and detail. The foreground stream was flowing very fast and it made the water feel like it was dancing before my eyes. This effect was further strengthened by the spot where the two stream converged and the different flows were almost jostling with each other for the right of way. Shorter exposures below one second were the way to go and I shot many different variants from 0.2 second to 1 second before selecting this one, which provided a good balance of texture and smooth flow.

What I also enjoyed about this place was that it was not a grandiose and well known spot. It was just a small waterfall to the side of the road but the landscape around it still had that rugged highland feel to it that I love so much. The dramatic clouds were a big bonus as well. They completed the composition for me and enhanced the mood further. I went for a dramatic look and feel in my processing but I tried not to overdo the textures and sharpness, especially in the rocky areas as I did not want them to detract from the water. I tend to soften the detail in my photos these days before selectively applying various sharpening techniques to selected areas.

As always, thank you for all your comments and support. I appreciate all of them and enjoy exchanging views on different aspects of photography.

@Harry: Many thanks Harry!

Excellent BW photo ! I love the flow of the water in long exposure ! the two arms of the river is really impressive. The dark sky gives a dramatic atmosphere !

what a wonderfully dynamic shot. The writhing boiling water is complemented by the cloud above the dividing rock. Removing the colour concentrates the eye on the energy evoked in the exposure time, which though relatively short, captures an incredible amount of furious movement in the water.

@grouser: Thank you Grouser. I am glad you understand the reasons for going black and white with scenes like that.

@Steed: Thank you Steed! Great to hear from you, hope you are going well.

Great capture of the fast flowing water under this superb sky. 5*

Amazing place especially that double originated river in canyons. your camera level is also optimal to take both foreground cliffs to that clouds at distance. I wonder how you controlled your desire to go to longer exposures and make streaky lines in the sky ;) I personally prefer colors in nature and black and white mood dosen't attract me but in this photo is strangely mysterious and acceptable
Good luck
Cheers

@Akbar&Armaghan: Thank you! I appreciate your thoughtful comment and I am glad that you like this image in black and white. I also love working with colours but I have embraced monochrome as it can also be very effective in telling a story where colour may not be the most important aspect.

A spectacular composition with such a sense of dynamics and power that flows through this unique landscape! 5*****

I love the texture of the water.

and congratulations on the Spotlight!

The capture of the water flow is beautiful, like music.

@B. Thomas: Thank you Barbara.I like you analogy very much.

The play of the water is very interesting here... Very dramatic scene. Congratulations!

You have achieved that lovely balance between texture and flow in the water. The detail in the rocks is a delight. A magnificent image.

Such a rugged landscape ... dynamic capture!

Congratulations ! You really deserve it !

great capture...!
and Congratulations on the spotlight.....

@Parviz Falahatkar: Many thanks Parviz

Excellent use of the slow shutter !

A beautiful photo in this superb NB, the long exposure gives a great effect! Very nice framing! Congratulations on the Spotlight!

@mo.langel: Thank you very much, as always Monique :-)

I knew this had to be Iceland at first glance. Powerful image!

Congratulations on the Spotlight! A gorgeous image so full of energy and power. It is amazing how you took these 2 streams and made them look so big and powerful as they come together. A magnificent view. I love the black and white!

@Elaine Hancock: Thank you very much Elaine! It was a wonderful scene to witness in real life :-)

That is so beautifully done.