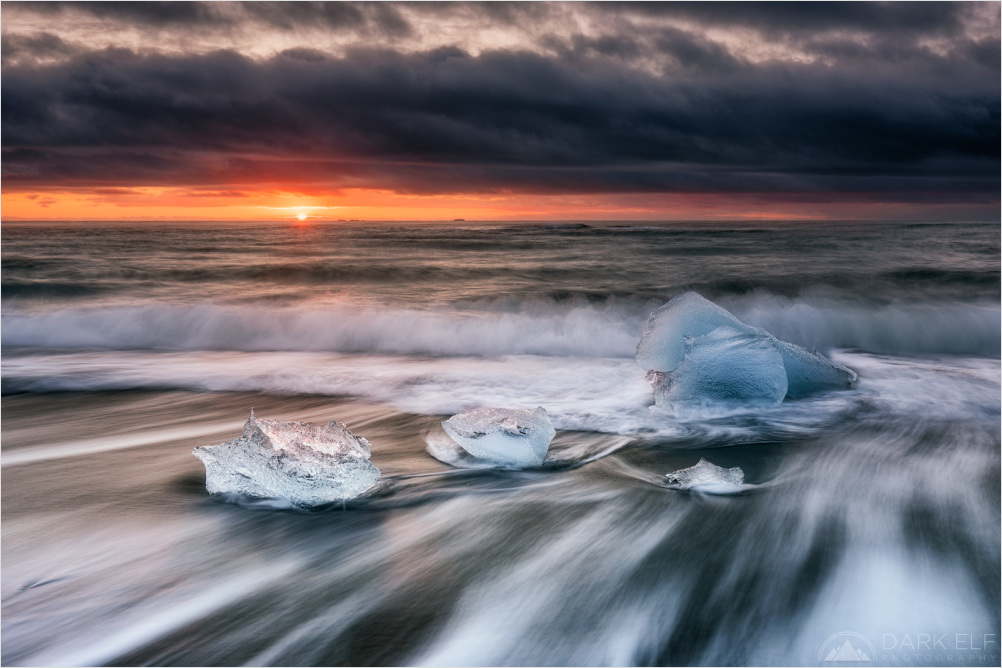 Posted by Darkelf Photography (Perth, Australia) on 18 January 2021 in Landscape & Rural and Portfolio.

Another photo from a couple of wonderful mornings that we spent at Breiðamerkursandur, the Diamond Beach on the south coast of Iceland. The sun made an appearance through the break in the clouds to shine a little bit of warm light over the water and icebergs. I was also able to get some nice dynamic flow in the foreground, which is something that I usually look for in my seascape photography.

I have already written about photography at this fantastic location. As I mentioned, on a good day you can enjoy countless compositional opportunities and it can be great walking along the black beach in search of interesting icebergs and light. It is what I like about seascapes so much - the combination of light, coastal elements and motion of the water. They can create a magical spectacle and it can be a lot of fun to photograph, especially when you are willing to get wet.

On this morning, the waves were actually coming quite fast one after another and that made for some very dynamic conditions. I liked the fact the the sea was not flat and the spilling sunlight gave it good dimension and depth. There was a gap just wide enough near the horizon for it to come through and add soft warm morning glow to the scene. The sun managed to just get sufficiently over the waves to catch some lovely highlights in the icebergs before the clouds covered it up again.

To get this photo, I worked around with different angles and shutter speeds to see what motion effect I could achieve. As was the case previously, I had to be patient to catch a moment when the icebergs remained still enough for longer shutter speeds to work without them ending up blurry. I wanted the ice to be crisp and sharp in contrast to all the movement around. The foreground streaks are actually from water receding back towards to the sea, while you can see the next waves already arriving in the background and reaching the iceberg furthest back. I found that when photographing the icebergs, the receding flow often worked a lot better as it resulted in a cleaner and smoother motion. This is also when the icebergs remained at their most still.

This is one of those moments when the beauty of photography can almost go beyond the beauty of a place. Obviously we would not see that kind of streaks and the water would be in constant motion in real life. For me photography is not just the final result, it is the combination of being there in that moment, using your skills and intuition to photograph it and then bringing it al together in processing. In this case, I remember the dynamic conditions very well and seeing the images appear on the camera screen, as I was taking them, gave me a real emotional high. These feelings will stay with me forever.

@Gérard Flayol: Many thanks Gerard!

An excellent capture in long exposure, the texture of the ice is superb!

Yes the energy of the receding water is wonderful as it rushes back to the advancing wave, with the static ice in crisp contrast. Topped off with a lovely background sunrise to make a delectable image

@grouser: Thank you very much Grouser. Hope you are keeping well.

Oh...this is wunderful to see

A splendidly-layered composition with a great sense of dynamics captured in the wave action! I love those jagged ice forms which contrast beautifully with the fluidity of the wave motion.

Wonderful. The light in the background really makes it.

A lot of work getting the ice and water to behave as you wanted them to. But, for me, the thing that takes this image way up a notch or two is the band of orange on the horizon and the sunlight across the water. Another brilliant image.

@Steve Rice: Thank you very much Steve. I agree with you, I also loved the light and colour around the horizon.

Wow - this is stunning.

Wow!
Just A M A Z I N G...
photography can go beyond the moments at the location and that is why it is an ART!

@Akbar&Armaghan: Many thanks my friend! Indeed it is art and I am glad we can contribute to it.

A gorgeous image. I love the color in the sky. I don't know how you were able to capture the ice with the constant movement of the water and the ice floating and moving itself. That was quite a feat, but you accomplished it perfectly. This is a magnificent composition. 5*

@Elaine Hancock: Thank you very much Elaine. The icebergs were large enough not to be disturbed by the smaller waves. Still I had to show a bit of patience to get them just where I wanted :-)

Wowzers ... that's some massive ice for your drinks!

This remarkable image sure lives up to the Iceland name. Those sparkling chunks of ice are intriguing. Another spectacular image.

5 stars. The shot of the month…