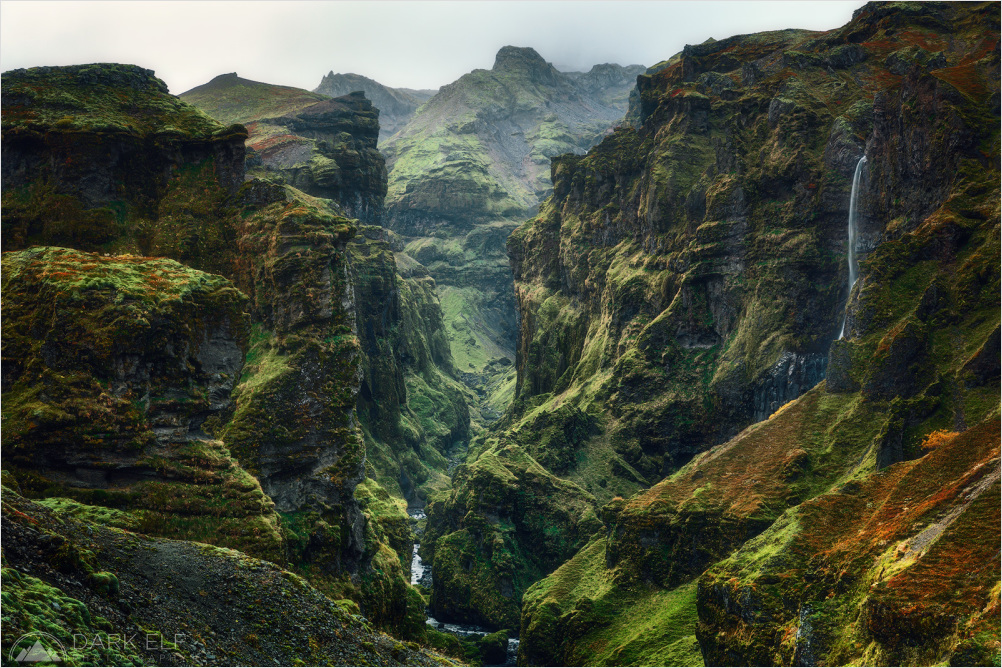 World is full of wonderful and mysterious places. Some are well away from the beaten tracks and some are hiding almost in plain sight, just like this magnificent canyon in Iceland. We had no idea it existed so close to other more famous locations and we were very happy to have found it during our last visit. The way the canyon is shaped and the way the cliff interacts with green moss and other plants are fantastic. It truly is nature's work of art.

We only had a general idea of where to find the canyon and we had to explore the area and maps a little bit to find its exact location. That made it extra exciting and made us appreciate the location even more. The best part is that it was so quiet there. We hardly passed any people on the way in and out. I believe that other photographers have deliberately kept the location secret so that the ones who find it can enjoy it in peace and I will keep it the same ;-) It could well be the worst kept secret but who knows. Our path lead early across beautiful autumn landscape and local glaciers were visible on the side. You can see touches of autumn colours in the photo especially in the foreground on the right. There were a couple of small creeks to jump over before we started climbing towards the canyon. This photo comes from one of the first places where we were able to peak inside the crevice. We had to keep a reasonably safe distance away from the edges as it was a bit slippery and the height of the cliffs was not to be sneered at.

The day was a bit of a mixed bag in terms of weather. It was overcast with low hanging clouds but also with few gaps in between that allowed some light to come through and hit the beautifully sculpted cliffs. Luckily the clouds were just high enough to reveal the canyon while adding to the overall mood. There was minimal texture in the clouds and that is the reason why I decided to keep the sky to minimum in the frame. The main interest was definitely in the canyon and bland undefined sky would not add anything further. I did like the separation that the low clouds added to the background with its more hazy appearance creating extra depth in the landscape.

Composition was very straight forward. I wanted to keep the canyon fairly central and with just a slight offset to allow for the waterfall on the right not to be right on the edge of the frame. The waterfall was a great element to include in the photo. It brought overall more a more balanced composition to my eye and also broke up the texture of the cliff, which was a little monotonous in that spot. The other major consideration regarding composition was how perspective changed when moving forward and back along the canyon. I had to decide what to include in the foreground and how to achieve good depth so that the terrain would not look too one dimensional. I hope I was able to address these points in the photo.

When working on post processing, I used dodging and burning to further build on the contrast in the landscape and create better separation between highlights and shadows. I think that it allowed for more depth and dimension to be visible. When I look at the final image, I feel just like I did when I stood there. I can see the way the canyon builds and progresses through the frame and I can see that there is a bit of distance between myself and the background, which is only just beginning to be revealed at the end of this section of the canyon.

I hope my photo can take you on a similar journey through the canyon and you can imagine for at least a moment that you are standing right there on its precipice and you are peering into its mysterious nature.

You have found a wonderful secret place ! it's like a fairytale landscape where we could meet the hobbit ;-) a superb composition and framing !

@Anna Cherer: A hobbit or a dark elf ;-) Thank you very much Anna, as always!

Wow,great spot ,i hope it will remain secret for a long time

@grouser: Thank you Grouser! It was an amazing sight to experience.

What a beautiful wilderness place you have found! The various shades are superb and the waterfall makes this mysterious place even more beautiful!

@mo.langel: Thank you very much Monique.

What an enchanting place! Beautiful work.

@Florence: Many thanks Florence! I appreciate your kind words.

Wow! An enchanting place with the eye-catching canyon formations covered in moss. Your narrative does this view great justice. 5*****

@Steven: Thank you very much Steven. It was a great place. We ventured in a bit more so I might have another photo or two coming later on.

Splendid picture ! Congratulations on your Spotlight !

A beautiful and rugged canyon with its coating of moss. I do feel like I'm standing there taking it all in. Congratulations on the well deserved Color Spotlight!

A great find. A spectaclar landscape.

Congratulations on the Spotlight! What a gorgeous hidden gem this is and a magnificent view. I love all of the different shades of green. Absolutely beautiful!

perhaps not the best photo you have produced, but this is such an incredible landscape! wow - I would love to see this wild place in person.

Great, wild and magic island. Congratulations for this spotlight.

gorgeous shot ...!
and Congratulations for this spotlight...!

@Parviz Falahatkar: Many thanks Parviz

and congratulations on the Spotlight!

You got him to see me there. Impressive photography.

I had no idea about such a green place in that cold Iceland:)
Very beautiful shot you made at the location
if I were you I would chose a zoom frame to make that waterfall embossed although I know you are a wide frame photographer
:)

@Akbar&Armaghan: Thankk you very much! I forgot to post a photo with EXIF details and no I have updated. I took this photo with moderate zoom of 62mm so I was thinking along the lines you suggested in your comment :-)

@yoshimiparis: Many thanks! Good to hear for you.

This amazing and exotic landscape looks like it could be from some other world. Thank you for letting me stand there and enjoy it's mysterious nature.

@B. Thomas: Many thanks Barbara

Are we visiting Middle Earth !?!?!?! Brilliant!

@CrashRyan: Middle Earth it could easily be :-) Thank you Ryan.

this reminds me of Hawaii. very nice.

What a great set of tones in that enchanted place!