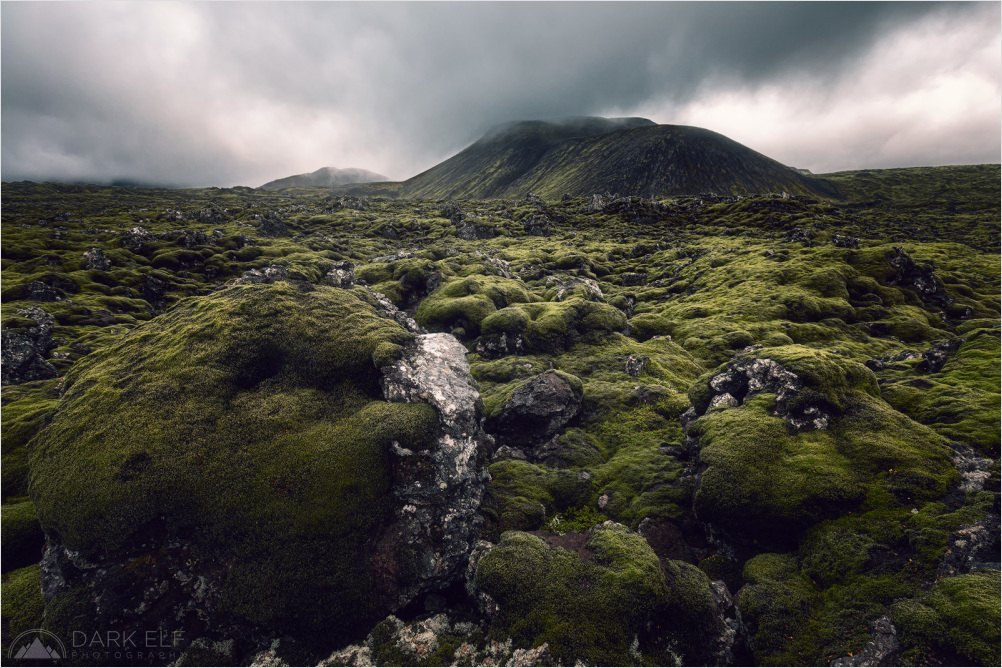 Posted by Darkelf Photography (Perth, Australia) on 1 February 2021 in Landscape & Rural and Portfolio.

There are many beautiful lava fields in Iceland. One of my first memories when travelling on a bus from Keflavik Airport was the lava field along the road to Reykjavik. It felt like such an alien landscape to me back then, especially with light rain falling all around. The fields vary greatly in their nature, from dark rough and rugged, to lush delicate looking ones. We found this field just south of the capital near an area called Reykjanesfólkvangur. I was immediately taken in by the overcast atmosphere and beautiful green tones of the moss. It had a surreal mood about it and we had to stop next to it to take some photos.

I took this photo hand held after walking along the edge of the lava field to find an interesting composition. The big blob of solidified lava on the left caught my eye, as well as the mountain in the distance. They worked well together to balance the scene. Clouds were moving fast and there was a bit of rain in the area so I had to pick my moment when to press the shutter button. I was looking for a bit of sunlight to come through onto the section between the foreground boulder and the mountain to create a kind of natural vignette effect and to lead the eye through the landscape.

The land forms created by the lava are magnificent and the re-growth that has occurred at some fields is really amazing. That green moss that we saw here was really delicate and gorgeous. It looked like a lush carpet thrown over the rocks. It had a wonderful texture to it and the way the green and black ashy tones mixed together produced a surreal result. I mentioned it previously but it did look like a different planet. No wonder they filmed some of the new Star Wars films on a similar field in the south of Iceland.

This is also an example of how worthwhile it is to look past the major attractions and locations. Most places, and Iceland especially, keep on rewarding if one is willing to explore off the main tourist routes and there are so many spots and different landscapes to find. Sometimes they are just a few steps away from the most popular places. One thing we have done in Iceland is that even on dark rainy days we drove around from place to place just to see if something new was hiding around the corner and we have been able to discover many interesting landscapes just by doing that.

Great framing and landscape.The kind of photo I would like to take...
https://labretagneselonmoncoeur.wordpress.com/

Superb atmosphere ! it's like another planet without people living here !

@Anna Cherer: Many thanks Anna

Beautiful landscape... the rocks are amazing.

@Ana Lúcia: Thank you Ana! It was an amazing landscape.

Excellent capture . I like the way the cloud just kisses the tops of the volcanoes and the moss covered boulders highlighted by the lichen patches are wonderful. A lethal landscape to wander through though I would think

@grouser: Thanks Grouser. Yes, dangerous terrain to tread on and we did not wonder in. You would never know where it is safe to put your foot down and also we would not want to disturb this pristine field.

A landscape so surreal and beautiful! The hovering clouds add a sense of enchantment here. While this is off the main route for tourists, does it attract a lot of photographers? Or were you fortunate to capture these beautiful views without being rushed?

@Steven: Thank you greatly Steven. Always great to hear from you. I don't know if this field attracts field specifically. I was the only one there when I took these photos and I had lots of time to pick out my composition. I am sure if anyone is passing by they would be taken in by the beauty of this place and they would stop as well. If anyone is like me as well, then they would also lock this place away in their mind to keep the possibility of returning again and may be during sunrise or sunset.

Otherworldly, is the perfect description of this place. I found a place for which this description also applies.

Your photo is quite gorgeous. The light and lava do draw the eye through the frame beautifully.

@Steve Rice: Thank you very much Steve. I had a look at your photo and I agree with your assessment. Lava fields hold a special place for me now that I have seen so many in Iceland.

Amazing green rocks with volcano in the background

@omid: Many thanks Omid

A spectacular image. It definitely looks other worldly. I am not sure how you managed to walk through that lava bed to find the perfect view. It looks nearly impossible. The color is gorgeous and such a surreal view. 5*

@Elaine Hancock: Thank you Elaine. We did not venture out onto the field, just along the road on the edge of the field. It would be quite dangerous to tread out there with no doubt many crevices hiding under the moss. Also we don't like to trample on pristine nature unless we see a path through or possibly solid rocky surface where we could avoid doing any damage.

I found this place very unattractive but your detailed description makes it quite noticeable and amazing
:)

@Akbar&Armaghan: Thank you, as always! Lava fields may not everyone's cup of tea and there is nothing wrong with that :-)

I was talking about traveling to Iceland one day with my brother-in-law and thinking about how many of these magical stop off's there must be to just sit and marvel and of course photograph. I love the mossy texture mixed with the ancient lava.

@Jason Kravitz: Thank you Jason! There are many fascinating places all over the world, a lot of which I have not seen yet and may never get to see. Part of the reason why I love Iceland is that there are so many fantastic locations packed into a relatively small country. No matter where you go, there is something new to see - mountains, lava fields, coast, waterfalls, rivers, glaciers and many more.

we feel through your photograph a heavy "atmosphere"

@yoshimiparis: Thank you. A heavy atmosphere is definitely what I was hoping to portray.

Photographed from an impressive point, the mist over the hills gives this photo extra atmospheric power.

@Willem: Many thanks Willem

I really love this. Lots of great elements. I enjoy your landscapes very much.

@Steve Carey: Thank you very much for these kind words Steve. I appreciate them greatly :-)

Your photos are always amazing and spectacular, as is this one.

These lava fields are an essential part of the Icelandic landscapes, indeed.