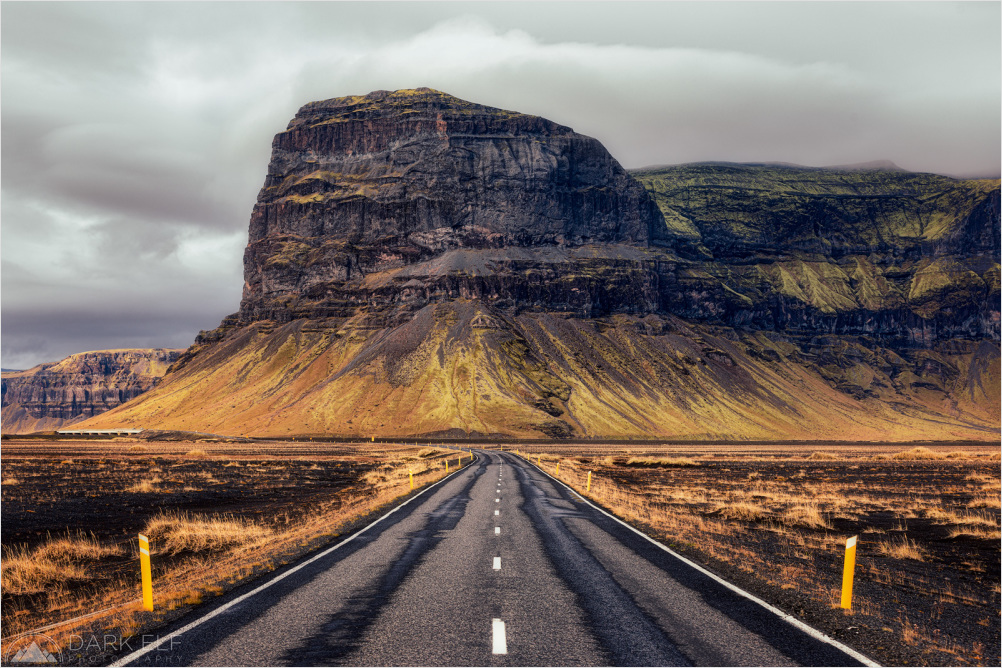 This is what I call it the most elusive mountain in Iceland, for me anyway. Not because it is hard to get to, as it is just off Route 1, but because every single time we went there it was covered in thick clouds. We drove past it a number of times and also went specifically there to take some photos but all we ever got were clouds. This time we were able to see it, even though clouds were still hanging around and waving their finger at me to take my chance before it's too late. Luckily, the highway was quiet at the time and I was able to photograph it with the road leading in, which was one of my pre-conceived compositions. The name of the elusive mountains is Lómagnúpur and it can be easily found in the south of Iceland.

I remember first time when were looking for it, we passed it on the way without even knowing where it was exactly located. it was not marked on our maps and I could not recall its name so we just went for a drive along the main highway and only after we got back we realised that we did not see it because it was hidden in the clouds. We were able to pinpoint its location for future attempts and while we were not able to see it, we were able to explore the area around it and visualise possible future compositions. One of them is the classic road photo that you see today. I was hoping to photograph the reflection of the mountain in a pool of water but there were not many around as there was not much rain in the few previous days. There was a pond on the other side but it was windy and there was no reflection. Also, Lómagnúpur looks a lot more impressive from this perspective. You can see its towering stature much better from the eastern side as well as its fantastic chiselled detail in the cliff. You might be able to spot a road sign in the distance ahead that can give a little bit of an idea of its size. It really does tower over the surroundings. I think it is more to do with its strong shape and large footprint because it is not that tall at about 760m high.

I had my 70-200mm lens attached as I was photographing some other peaks along the way and I played around with different focal lengths to see which one worked best. I was looking for that "compression" effect that long lens often produces but I did not want just the mountain in the frame. The leading road was an important element and I found that 70mm worked the best in this instance. There is enough of the road in the foreground while the mountain has that grand presence that I was looking for. Sometimes it is also worthwhile to take a few steps forward or back to see if that can improve the perspective. I did that here and decided to include the two poles in the foreground. I like the symmetry that they brought to the scene. They also act as kind of guides or markers that I found helped me to focus my eyes on the road and then towards the mountain.

We were into Autumn when we visited and I enjoyed the different tones of the landscape to the usual greens that we have seen previously. The grasses have turned golden yellow as did the base of the mound. It was cold, quite still and the crisp air made for great visibility despite the overcast conditions. It actually was the proverbial calm before the storm as over the next few days we experienced howling winds and usual dose of horizontal rain that we always get during our visits to Iceland. We could hardly get out of our cottage for a day or two and that made me even more happy that at least this time around Lómagnúpur was a little bit kinder to us and revealed its rugged beauty.

What a dramatic craggy rock this is. Excellent use of the lead in lines of the road, taking the eye straight to the centre of interest and then drawing it to explore further the surrounding dynamic light and colour

@grouser: Thank you Grouser. I know you like different geological formations this one was a beauty :-)

@Akbar&Armaghan: Thank you very much. Yes, our mindset was very similar in my search for a photo at this location.

your very beautiful photograph wonderfully translates this grandiose landscape, wild and hard to live at the same time

@yoshimparis: Thank you greatly! Always appreciate your comments and interest.

Another good one from Iceland,the weather can be so unpredictable, you can spend one week without seeing the top of the mountains

@Babzy: Thanks Babzy. Indeed, weather can be very unpredictable and especially in the northern regions.

A magnificent scene. I really like the road in this great picture. 5*

Your patience and preparation surely paid off. What a great view along this empty road leading us to the impressive mountain. Your story reminded me of an interview I heard recently with astronaut Chris Hadfield. He was talking about the challenge of photographing earth from the space station and if you missed a shot because of clouds etc, you'd have to wait weeks or a month or something like that for the next time you passed in that same orbit. He created a book of his photos called, "You are Here: Around the World in 92 minutes".

@Jason Kravitz: Many thanks Jason for your kind words and also for the info about Chris Hadfield. I will check out his photo book. I suspect his issues are a little more complicated from up there then the ones I was battling with :-)

No so elusive this time! And you captured it beautifully with its stately presence that towers above the landscape. The golden hues in the mountain have such fluidity.

@Steven: Many thanks Steven. Hope you are going well.

The yellow grasses and black rock of the mountain make for an instantly dramatic scene. The clouds are just high enough to work well as a background. I love this image.

@Steve Rice: Many thanks Steve. Appreciate it greatly :-)

A gorgeous image. I am glad that you were finally able to get a view of the mountain when not covered in clouds. It looks like the clouds could come in and cover it up again at any minute. The colors are beautiful. I love this point of view with the road that leads the eye right to the mountain. A magnificent scene. 5*

I can see that the road turns, but I feel drawn right into the mountain. Spectacular image.

It's a stunning landscape. So magnificent.

A great capture of this place that makes me think we could be on another planet! The colors are beautiful and I really like the shooting from the road!

this road into the Iceland mountain reminds me of a classic (that even I have attempted) road into Arches National Park in Utah. There, the problem more often is clear cloudless desert skies! You achieved wonderful tone in the burned-looking grass and the eroding mountain.

@Harry: Thank you very much Harry!

This deserves the Spotlight. A really cracking good shot.

@Daniel: Many thanks Daniel. I ahve not been to Monument Valley but I ahve seen many photos and indeed there is a strong resemblance from this perspective.

Addendum comment: Somehow this is really reminiscent of Monument Valley. I hope (but doubt) you were on a Harley to witness this vista. However it was experienced I'm sure your jaw was close to the ground.

@Stu: It does have that feel and shape that is reminiscent of Monument Valley, at least judging from the photo as we are yet to travel there. No Harley unfortunately. Actually, we have not seen too many motorcycle riders around Iceland. I think it would be great to do the Route One trip around Iceland for anyone who enjoys that kind of adventure.

Incredible how steeply vertical it gets ... it just pops out of the ground

@CrashRyan: Many thanks Ryan. It does rise rather steeply and I remember it just kind of popping out in front of the car as we approached. That was also partly because I was expecting it to be covered by clouds.

This is one impressive rock formation... Tones are different from usual, indeed.