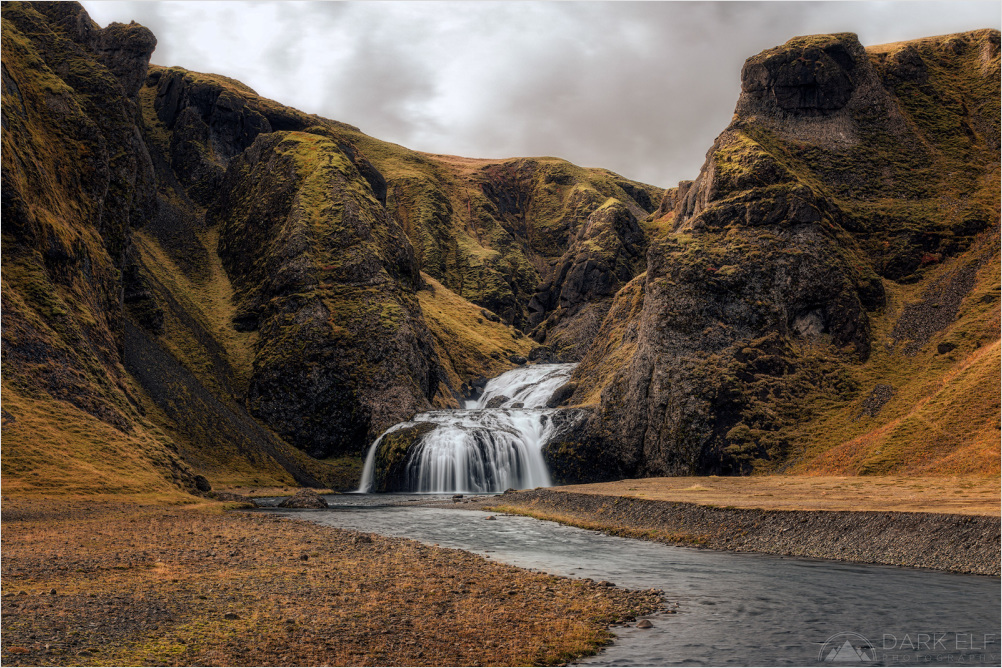 Another little gem from Iceland, just off the main highway and one that does not seem to be visited quite as often as other landmarks. When we stopped there in autumn 2019, there was no one in sight. The waterfall is called Stjórnarfoss and it can be found in the south near the town of Kirkjubæjarklaustur, if you can pronounce it (I cannot). This is a little further west along Route One and taken on the same day as the previous photo.

It is one more of those places that is very much hidden in plain sight. We visited this town on a couple of occasions to see other things and only discovered during our last trip that there are some cool waterfalls around in the area. We set enough time aside during our drive to be able to stop and explore some of them and Stjórnarfoss was the first one. It can actually be seen from one of the side roads and it is only a short walk to the waterfall.

There are not too many different angles from which you can photograph the falls. You can walk on each side of the stream or get into the stream if that was something one was into. The main consideration for me was how close I wanted to get to the falls and how much foreground/background to include. One obvious option was to focus closer on the actual waterfall and make it large in the frame but I chose to work with the surroundings as well. There was also a change from greenish tones to more autumnal yellow/orange as well, as we travelled along the south coast, which can be seen here (and in the previous photo). The autumn colours looked really good in between the rocks and I loved the shapes and forms of the cliffs so I wanted to show the waterfall in their context in this photo. I really like the balance here between the rising cliffs, their forms and the waterfall. The river leads in before the waterfall catches attention but it then leads you up towards the cliffs to have a look further.

The overcast weather was just right for me in terms of daytime waterfall photography. It eliminated harsh highlights that would have formed over the water streaks. I kept the shutter speed at a level where the streaks would also not get too washed out and there was nice texture to them. This was may be not as important as when photographing a closer view of the falls but I wanted to keep the water exposure under control as much as possible.

Not sure if you have noticed, but recently I have been picking out some photos from our last trip that we took at less known locations and ones that also show the kind of sculpted beauty of Icelandic landscape that I like the most. The last four photos, including today's, each concentrated on different textured landscapes that we found along the way. I just love these shapes of the hills, cliffs and mountains, created over the centuries by rough weather and volcanic activity. I kept the processing very similar in these photos to convey a similar story with different details. I hope you enjoy my visions and interpretations of Iceland as well.

Beautiful autumn colors and shapes around this waterfalls !

The soft light brings out the textures and the crag details nicely and the framing focusses the eye well on the rather curvaceous waterfall. The somewhat rounded contours of the falls and its surroundings speak to me of hard, obdurate volcanic rock

The color and detail is just perfect. 5*

I think you discovered the locations which the native themselves don't know!:)
A M A Z I N G!

@Akbar&Armaghan: I think they know about this one and many others too ;-) Thank you!

A nice picture of this rugged looking landscape, without the waterfall this would be a boring picture, now this one is great.

@Willem: Thank you Willem. I agree, the waterfall brings it all together.

So wunderful with all this oker yellow and your explanation

A beautiful waterfall that appears out of nowhere! It's as if the rising mountains squeeze it out. The textures and colors stand out nicely here.

such beautiful composition, colors & textures!
A M A Z I N G !!!

A gorgeous image. I love your point of view including the surrounding rocks and the beautiful autumn colors to include in the image. I think that what you included is just perfect. 5*

@bruce millen: Many thanks Bruce

Yes, I enjoy the waterfall and the cliffs as well. The contrast between the massive, powerful rocks and the silky flowing water is quite dramatic and enjoyable. As you mention, the colors are a treat, too.

What a wonderful place. Great capture.

You've chosen the perfect framing for this one. An incredible punch from this image. I'd love to visit Iceland someday. It's such an irony that to visit Iceland from here is so expensive yet I could have done it for a fraction of the price when living in Scotland. Why didn't I appreciate or explore what was in my own back yard!?

@Stu: Many thanks Stu! Appreciate your continued interest and support :-) Living in Australia, I know how far it is and how much it costs to get Iceland. I left Poland 30 years ago and at that stage going to Iceland was nowhere near my thoughts. I do wish sometimes I lived closer so i could just jump over an odd weekend but it is what it is and I love the place where I live too.

Gorgeous place ! Straight from the TV movie "The Viking" 5*

Nice to find locations away from the maddening crowds! beautiful shot.

Looks like this stream just comes out from the mountain wall... Extraordinary hillsides are surrounding it again.