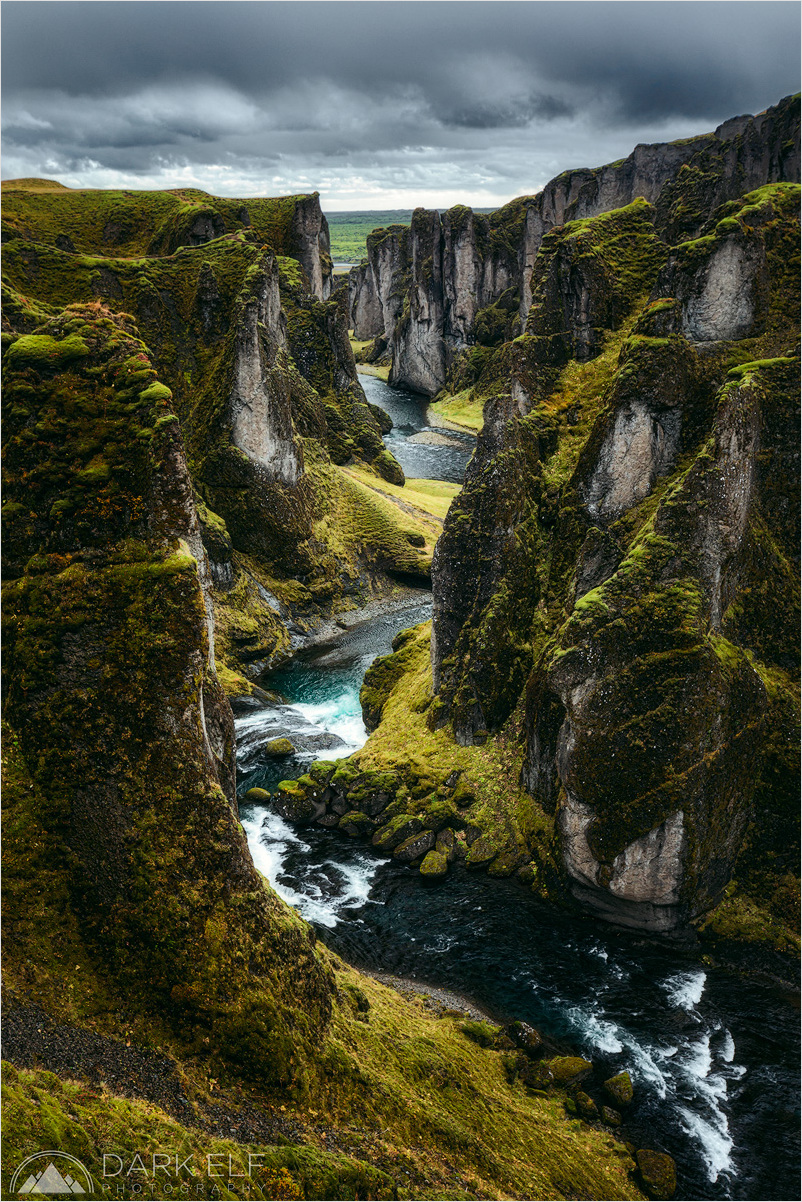 Posted by Darkelf Photography (Perth, Australia) on 8 March 2021 in Landscape & Rural and Portfolio.

Area around the village of Kirkjubæjarklaustur in Iceland abounds in many interesting geological formations. I have posted a couple of them already and this is a look inside another breathtaking canyon. Its name is Fjaðrárgljúfur and it is rather well known these days, especially to the fans of one Justin Bieber. One of his music videos was filmed here and it resulted in rapid influx of visitors to the area, which caused for the canyon to be closed for a few months so that nature around it could regenerate. There was a marked difference between our visits in 2015 and 2019. During our first trip you could easily walk right along the edges and walk out onto a number of outcrops to admire views and different perspectives. In 2019 there was a lot more fencing installed to protect the nature and that kept many previously accessible places off limits.

In any case, the canyon is wonderful. Different somewhat in nature to the one I posted here. A little bit more rocky, slightly shallower but more twisty and sharp in its appearance. It is believed that it formed around 10,000 years ago so what you can see here truly are remains of time. The river flowing through the canyon is called Fjaðrá and when its level is low you can actually wander inside the canyon, if you have a pair of wellingtons or some waders handy.

This is the view from the viewing platform farther into to canyon, looking towards it exit point. The surroundings were not quite as autumnal as in some of the previous photos. The canyon still retained a lot of green tones with just the odd touches of other colours. Overcast sky worked well for the dramatic feeling that the canyon seems to exude. I could feel how the time has been chipping away at the landscape, leaving these strange shapes in place. I used a polarising filter to reduce the glare and to darken the river and to increase the saturation of green tones. It also helped with increasing the contrast slightly that added good depth to the scene.

In post processing I worked a bit more to enhance the contrast to bring out the subtle tonal differences between the different elements in the canyon. I also used dodging and burning to add dimension and depth. This technique is one of my favourites to use and also I feel it is one of the most artistic techniques to be used in photo post processing. I am really glad I learned about it and it forms the basis of most of my processing work.

I am coming to the end of the current run of images from Iceland. I am sure I will go back to many other photos taken there and post them in the future. I hope you have been enjoying them and as always, thank you all for you comments and support.

Magic! all this nice green colors!

What a fabulous ravine with its sheer walls and clinging vegetation. A great perspective shot.
The limited choice of viewpoints is one more thing Justin Bieber has to answer for then :)

Amazing picture of a strange place!
I think the age of this place is much more than 100000 year and perhaps millions of geological transformation
Greetings

@Akbar&Armaghan: Thank you greatly! Indeed, the foundations for its creation were not doubt set by nature much, much longer ago.

@Anna Cherer: Thank you Anna! May be not the final yet, but we will see :-)

A splendid view through these majestic cliffs that form this canyon of glowing moss! I love the water flow as it meanders through. 5*****

Worth a compliment: "National Geographic photography".

@Willem: Many thanks Willem for that very kind comment. You humble me greatly.

5 stars. Congratulations for your spotlight

Wonderful picture ! Congratulations on your Spotlight !

Wunderful is this view.

A beautiful image of this amazing canyon. I enjoy that it's fairly narrow and has those nice turns. The bare rock on the canyon's sides draw the eye through the scene. Fabulous work once again. Congratulations on the Color Spotlight!

@Steve Rice: Thank you very much Steve. The different sharp cut shapes and cliffs were amazing.

A superb framing on this valley! The mysterious atmosphere of this place pleases me a lot! Very nice rendering! Congratulations!

@mo.langel: Many thanks Monique! Hope you are going well.

This is a breathtaking canyon, indeed. The sky works well up there and even a beautiful green field is visible in the back... And I love all these water patterns down there, too. Congratulations!

@Vaido: Thank you very much Vaido. Aoother fantastic place in Iceland that I could keep coming back to.

Every photo looks like a scene from Lord of the Rings ... it's simply gorgeous country

@CrashRyan: Many thanks Ryan! It is just like that, it is an amazing country.

Stunning image, I really like this one. I do love Iceland .