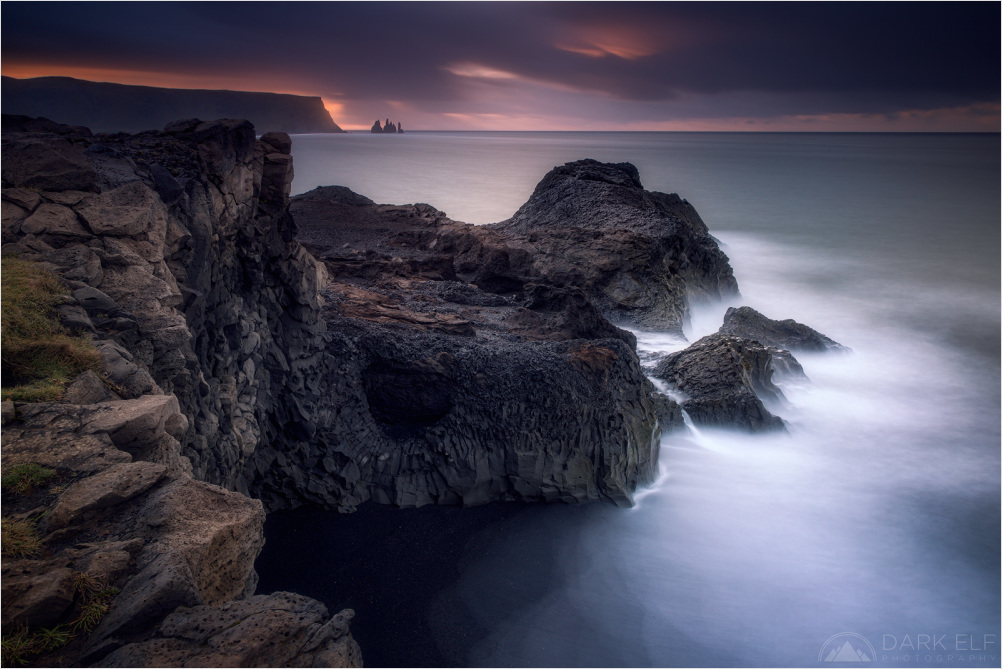 Posted by Darkelf Photography (Perth, Australia) on 15 March 2021 in Landscape & Rural and Portfolio.

Still in Iceland for today's post, this is a photo that had been on my mind for a long time now. I took it back in 2015 during our first visit to Iceland and its beautiful rugged coast near the town of Vik in the south. I have been think about processing this one for a while and never quite got around to it, however, I kept coming back to it and finally I decided to start working on it. Part of the reason that kept me delaying was that some time ago I already posted a slightly different vertical version of this scene with a faster shutter speed. I did love the long exposure one as well though and here it is.

My first thought when I went back to processing this photo was a somewhat Game of Thrones influenced 'surely this looks just like a dragon's lair would'. Your might even see a dragon's head and scales in the photo if you let your imagination roam a little bit. This was just the kind of scenery that drew me towards Iceland before our first trip. We loved this location and I especially enjoyed a morning of photography with superb conditions. I took a number of photos that I was very happy with that day and I also have not seen any other photos with similar composition from this area.

The long exposure had an interesting effect on the water in the foreground. The waves were quite large and they were arriving at longer intervals, from memory it was about fifteen to twenty seconds between waves. It meant that instead of the usual smooth misty effect you can actually see the outline of where each wave got to on the black sand. This created a cool layered effect that I really liked when I saw it on the back screen of my camera. Combined with the more usual misty feel of the water around the rocks and the softer clouds, it gave a the scene a different character to the more dynamic image that I posted before.

It is a good example of how you can achieve different takes on the same scene. In this case it was the use of different filters that allowed me to do so and sometimes the light might change dramatically during a shoot that can provide a completely different mood. The good thing about light in Iceland is that the best conditions in the mornings and evenings last a long time, provided there is no sudden change in the weather. This allowed me to get some dynamic images before still having lots of time to set up a long exposure and take this photo. Having allocated extra time to stay out there that morning and the ability to be extra patient helped a fair bit as well.

Wow! You have a wonderful blog!
You know how to choose your points of view.
I really enjoyed this!

@P-TER: Thank you very much! I appreciate your kind words :-)

lovely light, colours and detail. The hazy sea has a feeling of misty depth to it and despite the long exposure, detail of the wave and water action can still be seen. Excellent image

@grouser: Many thanks Grouser :-)

Absolutely stunning, love the mood of this shot. Love the length of exposure,

@Alun: Thank you greatly Alun. Wonderful to hear from you again.

Amazing what can be revealed in a 3-minute exposure! The colors and details are exquisite. This is definitely a place worth exploring, but I would have to go 3 or 4 times to take in all that you have shared with us. Splendid capture! Your story reminds me of an image from 8 years ago that I eventually processed this weekend and was surprised by the results.

@Steven: Thank you very much Steven. We did spend some time there the day before so I already had an idea where I wanted to go in the morning :-)

I actually see a dragon without having read the title.
A 5* again

@Marjolein: It's definitely a dragon kind of scenery. Many thanks Marjolein

Wonderful capture and fantastic imagination of a dragon lair shape of that!
A M A Z I N G!!

@Akbar&Armaghan: Thank you very much my friend.

That is a good visualization and perfect title, though I can't help think of this Dragon's Lair.

I also like your framing and composition here with that curve of space created between the foreground rocks and water/colorful sky.

@Jason Kravitz: Thank you Jason. Well, there are different kinds of dragon lairs ;-)

This is phantastic! World-class image!

The rocks tell the story of the Earth. Amazing

@Ana Lúcia: Indeed they do. Thank you Ana

I surely see a large dragon's head with that deep dark eye and scaly face. Quite menacing! Luckily, it still sleeps with the water caressing its jaw. A gorgeous image full of wonder.

A gorgeous image that has a lot of mystery to it. The milky water in the foreground almost looks as if something from another world is lurking underneath and could rise up at any time. This is a wonderful rock formation. With any stretch of the imagination, it does look like the home of a dragon. I love the view in the distance. 5*

@Elaine Hancock: Thank you very much Elaine. This place definitely holds many mysteries.

A stunning photo result thanks to the 170 second, and also as always a fantastic chosen composition.

@Willem: Many thanks Willem! Long exposure can certainly bring a different mood to the scene.

I love all the tones and textures of the rocks in the foreground. The horizon with beautiful tones in the sky frames the top perfectly.

I love these techniques you are using to get this shot ...I need to practice them ....

So moody and other-worldly. The land that time forgot.

@Stu: Many thanks Stu