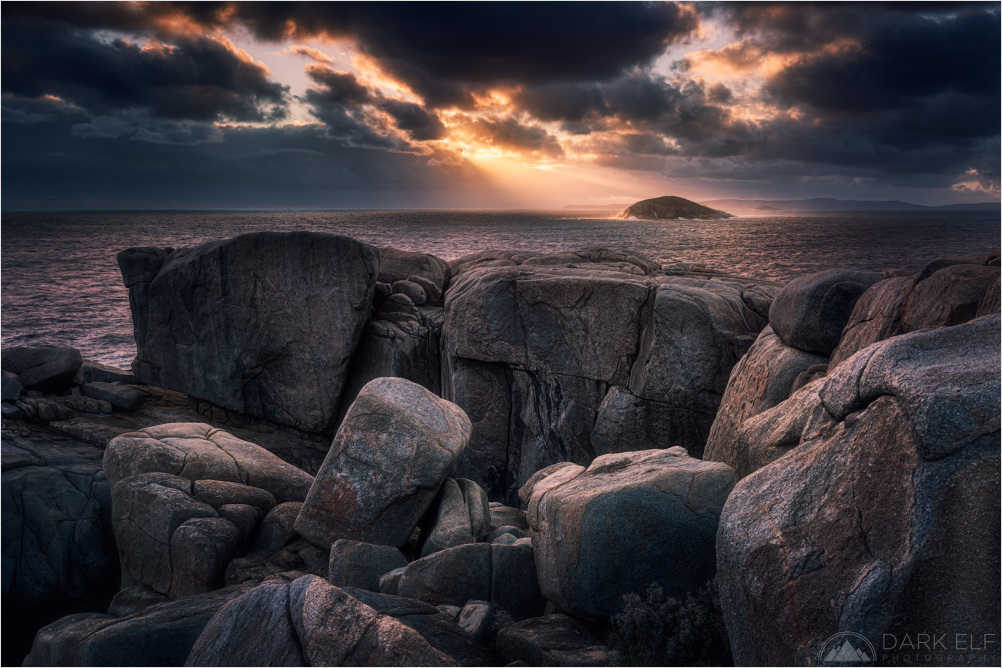 Posted by Darkelf Photography (Perth, Australia) on 22 March 2021 in Landscape & Rural and Portfolio.

From one moody coastal scenery to another on the other side of the world and much closer to home. One of my favourite locations in Western Australia, the granite coast of Torndirrup National Park in the south of the state. It has featured in my photography a few times previously and last year we have been able to travel there again. Our state has been lucky so far in Covid times. We have been able to travel around freely for most of the time with only very limited restrictions in place. With no overseas travel, I am glad to have had more time to explore new places in Western Australia and to return to some of my old favourites. This year will be much the same I think.

Every time we have been out here the conditions have been different. Always different clouds and light that change the character of this place. Sometimes it can get very windy, as it the nature of coastal locations, though it was quite calm that evening. As we were driving towards the national park, I could see that we most likely would not get much of a sunset, as the clouds were low and covered the horizon entirely. However, I could see some breaks in the clouds and I was hoping the late afternoon sunlight would shine through and illuminate the cliffs with beautiful warm glow.

Just as we arrived and I set up my camera and tripod, I noticed this scene developing in front of us. There was indeed light coming through the clouds and particularly one strong beam shining directly onto the little island in the distance. I thought for a moment about getting a longer lens out but decided against it and looked around for interesting foreground to work into the photo. There is no shortage of various rock formations and interesting boulders in this area and I was able to find something that worked for my idea and vision.

In addition to the light beam in the background, I also liked the softer, more dappled kind of light hitting the rocks immediately in the foreground. That set them nicely apart from the darker granite "wall" in the midground, which in turn added an element that aided separation between the front and back. That, in my opinion, increased the feeling of depth and added dimension to the entire scene and when I look at the photo I can clearly distinguish each part of the scene. They each have something interesting in themselves but they also work well together and do not get in each other's way. Also, you could almost follow a trace of the light through the frame. You can either start with the beam of sunlight at the top and and follow the light down and around towards the foreground rocks or you can do it in reverse as well. That made the image for me.

I almost missed the photo though, because when I was ready to take it, another tourist stopped by and started asking questions about cameras, tripods and photography in general. There must be some kind of Murphy's Law which states that just as the light gets perfect and one is about to take the image, someone will walk up to you and take all your attention away. I mean it all in joking terms of course. I am always happy to talk photography and have exchanged ideas with other photographers on many occasions. I did politely ask the person to wait a few minutes and once I knew I had the shot we could resume the conversation.

As the evening progressed, we hanged around after the light had disappeared to see if anything else would happen after sunset but this was as good as we got on the day. I was very happy to have come away with this image and to have spent a fine evening on the south coast surrounded by its amazing nature.

The granite boulders in the foreground have a sculptural presence reminiscent of Henry Moore's work and the light brings out their detail and textures perfectly. The background rays, cloud, sea and land compliment it beautifully.

@grouser: Thank you very much Grouser! I checked out the work of Henry Moore and indeed I appreciate the comparison.

So much rich texture and detail here to feast the eyes on. Just sublime light too.

@Stu: Thank you Stu. Hope you are keeping well.

Beautiful crepuscular ray that eminates from the heavens above! And your lighting is perfect to highlight the visual interest of the foreground as well.

Again beautiful seashores of Australia and your amazing captures
How nice there is little limitations in your country and you can take photos freely in these bad days.
stay safe and also out of Murphy's law
:))

@Akbar&Armaghan: Thank you very much. I will try to ;-)

A beautiful light on this sea scene.

Perfectly timed with the ray of sunshine on the middle free-lying rock formation.

@Willem: Thank you very much Willem.

Hello, Maciek! I haven't viisited Aminus for what seems an eternity, but when I browsed today's photos I recognised your style immediately. Good to see that you're still so creative, providing us with your excellent images!
I hope you are well and "negative"! Hope to see more soon!
Regards!

@Franz: Hello Franz! It is great to hear from you and indeed, it has been a long while. All good so far at my end and I also hope all is well with you and your family.

such beautiful composition, clouds, colors & lights!
A M A Z I N G !!!

@Ralf Kesper: Thank you Ralf. Appreciate your comments and support!

A beautiful scene with amazing light. Those large boulders in the foreground really do it for me. They immediately grab you and draw you in. That lighted island is a bonus.

@Steve Rice: Many thanks Steve. These granite boulders are what makes me want to return there all the time.

A gorgeous composition. The first thing that caught my attention was the light coming through the surrounding dark clouds and shining right on that island and then I noticed the beautiful rocks that have such incredible shapes and texture. A magnificent image. I thought about you when I saw that erupting volcano in Iceland on the news. That will surely change the landscape in some areas. It would be amazing to photograph!

@Elaine Hancock: Thank you very much Elaine. Always lovely to see a comment from you :-) Yes, I heard about the eruption in Iceland and saw some amazing photos already of the red lava spewing. Luckily no damage to anyone at this stage. I would love to be able to photograph an event like that.

spectacular - fine job on the rocks beneath the dramatic sky

@Harry: Thank you greatly Harry! Appreciate your interest and comments.

What a strong image with this light

You still managed to catch this magical light... Great work with the rocks in the foreground.

@Vaido: Thank you Vaido. Got there just at the right time.

mE from Middle Franconia, near Nürnberg, Germany

An absolutely fantastic and magnificent shot.
How the single sunbeam illuminates the rock in the sea.
Was that a coincidence? Or did you wait for it.

@mE: Thank you very much! The light just happened to illuminate the rock as I got to the scene. I saw it and I knew I had to photograph it.

The rocks are sculptural. I feel as if I can reach out and touch them.