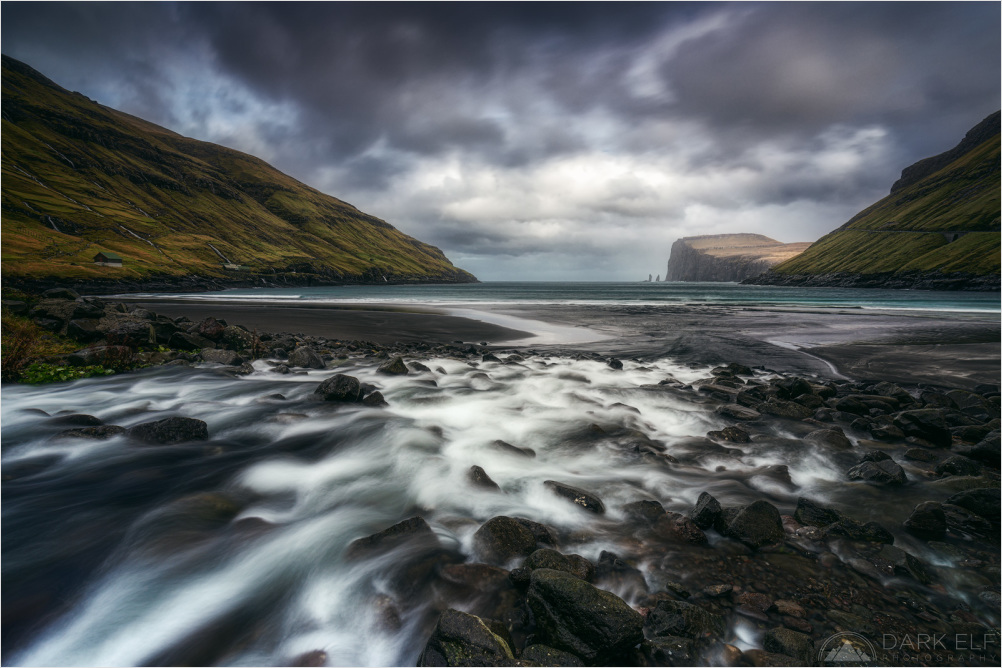 Posted by Darkelf Photography (Perth, Australia) on 6 April 2021 in Landscape & Rural and Portfolio.

Not long before the world shut down we had a chance to visit the beautiful Faroe Islands, which are located about half way between Iceland and Norway. One of the first places we headed out to once we settled in was Tjørnuvík, a small village in the north of Streymoy island. This is the view on a gloomy day overlooking a waterfall that was flowing right towards the local beach with the Risin og Kellingin sea stacks and cliffs of Eiðiskollur visible in the distance.

I guess you could say it was a typically North Atlantic kind of a day with windy overcast conditions and frequent rain passing through. If we had not been to Iceland, I might have been upset about the weather but by then I knew that was to be expected and we still drove out to see as much as we could. When we arrived in Tjørnuvík, this was the scene that immediately caught my attention. There was a waterfall pretty much right up on the beach and beyond it was the wonderful view towards the northern tip of Eysturoy island. It was cold (for an Aussie) but the wind did not quite reach that far in and it seemed relatively calm most of the time. That allowed for the beautiful sound of the flowing water to fill the silence and it was the prefect soundtrack to the surrounding scenery.

After walking around a little bit I knew that I wanted to take a photo with the waterfall leading in and for the distant headland to anchor the composition in the background. I took a few different frames to see how best I can position the stream in the foreground and what elevation made for the most interesting angle. Being higher allowed for the beach to be visible in the midground and it also revealed the little curved stream that connected the waterfall with the sea. I really liked that because I try to look for connections in my compositions that guide the viewer between different elements of the scene and I found that it took my eyes onward towards the background.

In terms of exposure and shutter speed I was looking to retain some texture in the flowing water. I did not want it to be completely washed out as I did not think it would work well in this photo. There are scenes where milky smooth looks fantastic but in others it can just create a big mass of white nothingness. The final decision is of course based on individual artistic vision. The water was actually flowing slowly to the eye and shorter shutter speeds made it looks really rough and messy, which also did not work with my vision for this scene. Sometimes I wonder whether I overdo the slow shutter speed and I did compare all the exposures I took thinking if I should keep it looking as natural as possible. In moment like this I ask myself what would enhance the mood the most and that is what guided me in my final image selection.

I hope you enjoy the first image from Faroe Islands. I have few more lined up to process and post. It was great to make it there in 2019 and I can say that the Faroes are definitely very high on the re-visit list should the world return to any kind of normality in the future.

A wonderful wild place ! excellent choice of shutter speed on the flow of water, it gives a beautiful painting effect in my opinion. The cloudy sky is amazing too !

@Anna Cherer: Thank you Anna for your kind words and support :-)

A M A Z I N G !!
we are eager to see your serial from this Faroe island and compare with Iceland
:)

@Akbar&Armaghan: Thank you! There are similarities but also many differences.

Excellent image. The sea can be very rough out there at times. 5*

@Shaun: Thank you Shaun. Indeed it can!

A stunning view captured from this low PoV! The converging lines of the hills and the flowing water make it feel like I am traveling through this frame. Taking me to these unfamiliar lands makes me yearn to visit. :-)

@Steven: Many thanks Steven. Appreciate your comments and support greatly. Looking back through the photos, I long for travel as well.

a wonderful view of this inlet with its arms and the two distant sea stacks. I like the limited colour palette and the mist like sea swirling over the rocks complements the sky nicely. Incidentally a type of sky we see here far too often, although its companion the flat grey is worse and even more common. :)

@grouser: Thank you very much Grouser. I'll take this kind of sky over total greyness or blue skies any day of the year for photography. Although, I have learned to embrace the less favourable conditions as well, when possible.

An excellent framing and long exposure! The place is beautiful wild, the colors are very nice!

@mo.langel: Many thanks Monique! Thank you for your visits and support.

I remember that crazy place and those two sea-stacks! I was on the Faroe Islands 15 years ago and had not any descent gear back then to capture the beauty there. I'd like very much to visit these islands again. Looking forward to see the photos :)

@Vaido: Thanks Vaido. I would love to return one day as well. As was expected, the weather was very mixed and while we saw a fair bit, we still missed out on many other wonderful parts of the Faroes.

The dreamy water flow is exactly right to my eye. The eye has to follow it into the wonderful composition. Superb work as always.

Absolutely stunning, what a place, I would love to visit there. One day

@Alun: Many thanks Alun. Beautiful place and I would also love to return to Faroes one day.

A jaw-dropper. Spot on.

I feel as if I'm standing in the river, can hear the sound of the water and feel the damp, cool air.

@Anita: Thank you very much Anita :-) I appreciate all you comments and support.

@Willem: Many thanks Willem!

This is gorgeous. I love how you caught the water from the water fall flowing down to the beach. It leads the eye forward to the magnificent view of the ocean. I love the color of the green hills meeting the water and the island in the distance. Absolutely beautiful. Such a spectacular place.